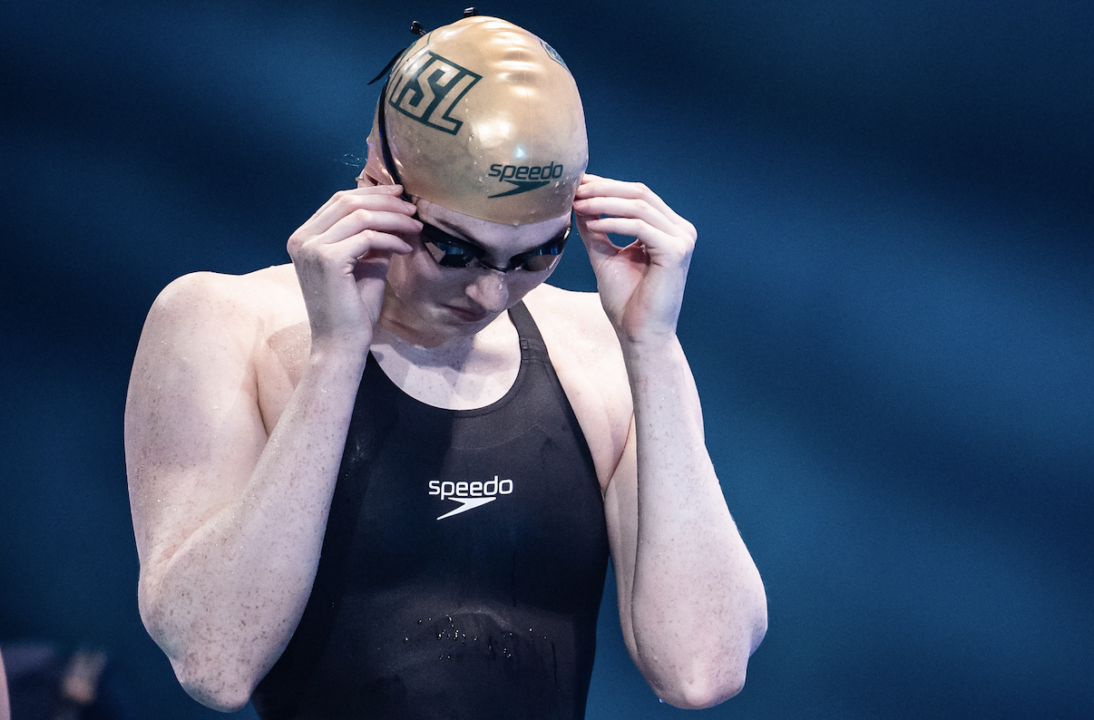 The London Roar remained undefeated, and they're surging back up our power rankings after week 3 with new freestyler Freya Anderson now in the mix. Archive photo via Mike Lewis/Ola Vista Photography

The London Roar remained undefeated, and they’re surging back up our rankings after week 3.

No change for Cali over the bye week, though it’s worth noting that Energy Standard is surging. The Condors lost the top spot in the league in the women’s medley relay to the London Roar. That’s almost unthinkable, given Cali has never lost that relay head-to-head in league history, stretching back to last year. Here’s a look at splits from each team’s overall season-best:

Cali obviously has some room to move up from that time – they had Natalie Hinds anchor in 52.0 in week 2 with a faster split from King. But #2 and #3 are much closer to Cali right now than they appeared to be after week 1.

In week 4, Cali will get a shot at revenge against #3 London, which beat Cali for second place in the league final last year.

Energy Standard got Femke Heemskerk back and promptly lost Sarah Sjostrom. And weirdly enough, Energy barely felt either absence. What really sets this roster apart is how deep it is across the relays and how Energy will pretty much have a title contender in every stroke of the skins. The rise of Anastasiya Shkurdai is massive – she covers for Sjostrom’s absence in the butterflys and the 100 IM.

Florent Manaudou also looks to be in terrific shape. After an awful week 1, Ben Proud quietly rebounded in relay-only duty last week and split 47.2 and 47.9. (He was 48.9 in week 1 and just 21.5 in the 50). Next week might give Proud another shot at individual racing, and he’s a key piece to their postseason hopes.

London surges up the board after beating LA and Tokyo decisively over the weekend. London has the league’s #2-scoring women’s roster, bolstered by sprint addition Freya Anderson. They also have the league’s #3-scoring men’s roster with one of the most well-rounded rosters.

London has not yet had an individual MVP winner this year, and only had one (Emma McKeon) last year. London’s schedule is brutal, but does offer a golden opportunity to keep rising in the ranks: London gets #1 Cali in each of the final two regular-season weeks with a pretty good blueprint to win: take the men’s medley and pit their backstroke strength against Cali’s weakest stroke (probably keeping Dressel on the bench). The women’s side will be a whole different ball game, with both teams having almost identical medley relays, but also favoring the same strokes (back, breast) for the skins.

LA dropped a tough matchup to London this week, but they get a bye week to recover and strategize before they get to rematch both London and Cali in the regular-season finale.

The Current have the league’s #1-scoring men’s roster, they’ve won a league-high four skins races and have tied Cali for a league-high two meet MVPs. They currently have the #2-ranked relay in the entire ISL in both men’s relays, the women’s free relay and the mixed free relay.

Pretty much locked into the postseason, LA really has two more goals for its final regular-season meet: taking the regular-season MVP (they currently have three of the top four scorers, though with the benefit of an extra meet, in #1 Beryl Gastaldello, #2 Ryan Murphy, and #4 Tom Shields) and figuring out their best breaststroke skins options with several top teams likely to pick breaststroke as the skin stroke in the postseason.

Tokyo has had a brutally tough schedule so far. The good news? They won’t see the LA Current again until potentially the postseason. The bad news? They get the #1 Cali Condors and #3 London Roar next week as things just don’t let up for the Frog Kings.

Tokyo will have to hope a scrape with Dressel wakes up star sprinter Vladimir Morozov, who just hasn’t quite been himself this season. Another key matchup: league 200 fly leader and record-holder Suzuka Hasegawa against Hali Flickinger, who has never lost a 200 fly in ISL competition.

What’s great for Tokyo (and really for swimming as a whole) is that Kosuke Hagino is finally looking like himself again, maybe for the first time since the Rio Olympics. For those who remember how incredible Hagino’s peak was, his return to form is an exciting development for next summer’s Tokyo Olympics.

We undersold Toronto hard last week. With the sample size doubled (this was just Toronto’s second ISL meet ever), the Titans are surging up our rankings. For now, we’ve got them ahead of Iron – the two teams swim head-to-head next week in a battle that should solidify the rankings some.

That matchup might come down to the skins, where both teams have really notable strengths (backstroke for Toronto, men’s breaststroke & women’s fly for Iron) that don’t really overlap. Toronto’s combo of Kylie Masse and Lisa Bratton has been outstanding in the backstrokes, winning five of their six backstroke events so far including 1-2s in both 200 backs and 1-3s in both 100 backs.

The key improvement Toronto needs, though, is men’s scoring. They’re currently 9th in the league in men’s scoring, averaging just 152 points per meet on the men’s side.

Iron was on bye this week, but even without having to swim, they maintain the league leader in the men’s 50 breast (Emre Sakci) and women’s 50 fly (Ranomi Kromowidjojo).

Next week’s showdown with Toronto will be season-defining, even though both teams are probably locked into the postseason with only very slim hopes of making the final.

Iron does have a tough slate to close the year, though. They have Energy Standard in each of the final two weeks of the season, and if they lose to Toronto next week, they’ll head into the final week needing to upset Energy, Tokyo, or Toronto to avoid taking last-place.

The Breakers didn’t swim badly, but it was clear Toronto was the better team in week 3. Kasia Wasick continues to get faster, and she currently leads the ISL in the 50 free by almost two tenths of a second. Meanwhile Marco Koch continues to be the jackpot master, turning in a pretty impressive tally of overall points for a breaststroke specialist who really doesn’t swim much else, and even within breaststroke specializes in the 200.

New York has put itself in good shape to make the postseason – they’ve beaten both the DC Trident and Aqua Centurions head to head – and that’s a solid step for last year’s last-place finishers. The Breakers have had one skins finalist (Joe Litchfield) and three skins semifinalists (Michael Andrew twice and Alicia Tchorz once), and the big breakthrough for them would be getting a skins win in their regular-season finale next week.

DC has the league’s lowest-scoring men’s roster – and that’s pretty brutal when you have one of the league’s best overall swimmers in Zach Apple. The Trident have really struggled to fill out their butterfly spots, going 7th-8th four times, 6th-8th three times and 6th-7th once so far this year.

The highlights have been some of their young talent to potentially build around in future years, especially if impact swimmers like Katie Ledecky or Cody Miller can come back next year. Apple leads the league in the 100 free this season. Linnea Mack was a skins finalist, and DC has gotten Lindsey Kozelsky and Mark Nikolaev into skins semifinals.

It’s the women’s roster that is holding the Aqua Centurions back, and that has a lot to do with how many impact swimmers withdrew from the league late amid the coronavirus pandemic. Without most of their expected Italian contingent, the Aqua Centurion women are averaging 70.5 points per meet. That’s less than half of what the next-worst team (DC at 152.3 per meet) is averaging on the women’s side.

For comparison, the Aqua Centurion men are actually the 5th-scoring men’s roster in the league, and haven’t lost a 4×100 freestyle relay yet this year. That relay also won once in 2019 and has never finished lower than 3rd in ISL history. That’s a key strength to build around.

Szebaztian Szabo has been awesome, with the league’s best 50 fly time by four tenths of a second. He was a skins finalist this past week, Aqua’s first skins finalist of the season.

Justin Ress and Coleman Stewart make up a pretty strong Cali backstroke group, pretty sure a skins match between them and London could go either way

Against Guido? they can even be jackpot by Guido

Ress and Stewart have more name value to those of us who follow the NCAA pretty closely. But in season-bests, London (Guido 22.86, Diener 22.76) is clearly better than Cali (Ress 23.0, Stewart 23.3). Guido beat Ryan Murphy this past weekend, and I think even NCAA aficionados would say there’s a pretty big gap between Murphy and Ress/Stewart in the U.S. ranks.

There both sneaky good but not as good as guido. But hypothetically there are few situations that come down to a match between London and Cali being decided by the men’s backstroke skins. Cali women are to strong to let that happen but at best Coleman and ress shouldn’t get jack-potted and should make it to the semis which hypothetically would be enough to save a match.

Aqua men are quietly having a nice season, with tremendous sprint freestyle depth. I wish we could see them in the postseason.

Chiereghinni + Szabo + Mirassi is a pretty strong trio.. they just lack a good backstroker there.

Also for Energy, Kolesnikov was better in the second meet, good sign.