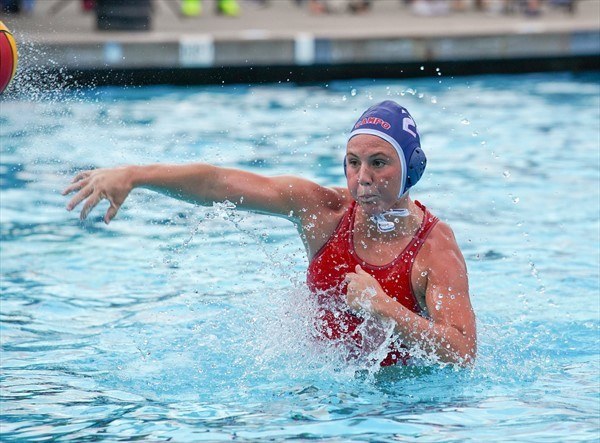 “This is a very exciting recruiting class for us,” Castle said. “We focused on bringing in a balanced class filled with size, speed, brains and a lot of potential, and we definitely delivered.”

Those arriving next fall will benefit from the 2019 season as the team gears up to compete in the Mountain Pacific Sports Federation Conference for the first time. “Each of the fine young ladies coming to Bloomington next year is coming to be part of a Midwest MPSF program that prioritizes academics,” commented Castle.

The Hoosiers received their first commit from Robyn Greenslade, a European native. Greenslade played for Newton Abbot and London Otter where she appeared in six European Championship competitions placing sixth in U17 (2017), ninth in U19 (2016/18), first at Women’s UE Nations and first in both U19 and U17 EU Nations. Greenslade was also voted Best Player at U17 EU Nations out of ten countries.

From Coach Castle: “Robyn is an explosive, relentless center who will generate a lot of offense for us next year. She has extensive experience competing in Europe with her national team, and will bring a competitive edge.”

In addition, Crouch was a member of Lamorinda Water Polo and 680 Water Polo Club where she placed second at Jos (2016). Crouch also participated in the Olympic Development Program and attended the National Training and Selections Camp twice.

From Coach Castle: “Zoe is a true utility player who is a threat anywhere in the pool. She can play defense, post-up, set and shoot from the outside. She’s a tough player to guard one-on-one. She will help us right away in whichever position she plays.”

From Coach Castle: “Katherine is a teammate of Zoe’s at Campolindo who will bring a lot of energy to our program. She moves around and sees the pool really well. She also fits in well with the culture of our program.”

From Coach Castle: “Lauren is an attacker who will surprise a lot of people in college. She has a high water polo IQ and is a great one-on-one driver and defender.”

From Coach Castle: “Becky is a versatile utility player with good speed, a dual-threat attacker both at two meters and on the outside.”

Additionally, Wessel had the opportunity to train in Hungary for three weeks over the summer alongside future teammate Becky Schofield.

Lanna DeBow began her water polo career as a sophomore at Ursuline Academy. DeBow earned three water polo varsity letters and set two team records scoring 147 goals and swiping 154 steals. DeBow was awarded Ohio Player of the Year, All-State Team, All-State Tournament Player of the Year and Most Valuable Player of her team. While at Ursuline Academy, DeBow contributed to team victories at both the Ohio Cup and Ohio High School State Championships. Additionally, DeBow was a member of the Moose club team and played for the Mid-West Zone Team at the Olympic Development Championships this past year.

From Coach Castle: “Lanna is another tenacious athlete who will bring size and defensive toughness to our program.”

From Coach Castle: “Taryn is an exciting left-handed attacker, who will help our depth on the 4-5 side.”