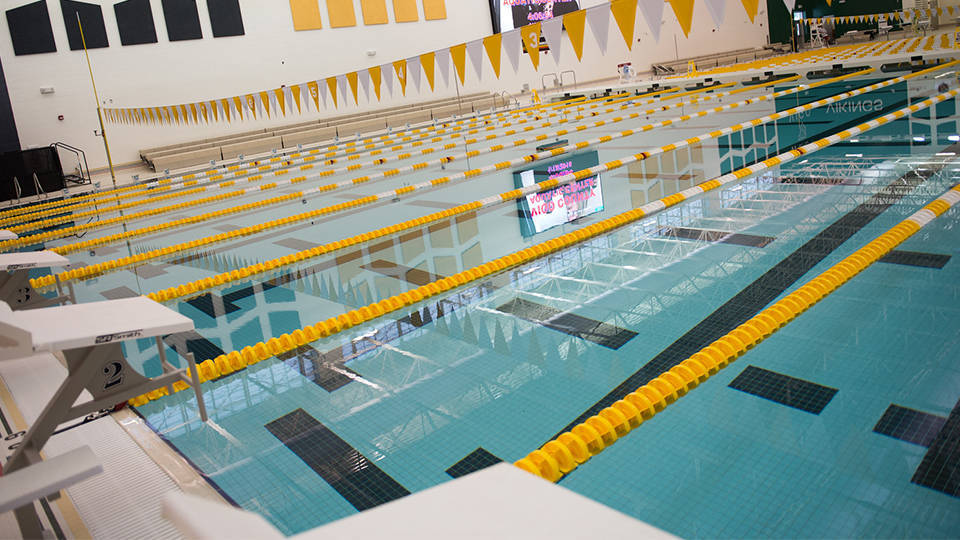 What Coach Christensen is Saying:

“We’re really excited about this group and what they’ll be able to add to our program. This is a large recruiting class that will give us some really solid depth across each of our training groups and events. A few of these student-athletes have the potential to come in and be some of the top athletes in Missouri Valley Conference. We also have some young women that we think are just going to take off in terms of development over the next few years. They are all great people who are excited about being part of the process of taking our program to the next level. We’re looking forward to getting them on campus and investing in their growth as people, students, and athletes.”

Carmina Armstrong comes to Indiana State from Jasper, Ind., where she attended Jasper High School. At Jasper she primarily swam in butterfly and freestyle events and was a four-year letter winner. Her senior year saw many accolades, including being named the team captain and MVP, earned the Most Points Award, being named to the NISCA All-America team and Academic All-State, winning the conference championship in the 50 and 100 freestyle and winning the sectional championship in the 50 and 100 freestyle and 200 and 400 freestyle relay. She was also named to the All-Conference team. At the end of her career she captured 16 sectional championships and holds the school records in the 200 medley and 400 freestyle relays. In addition to swimming at Jasper, Armstrong also competed as a member of JAWS swim club. Armstrong is the daughter of Ric and Leticia Armstrong and has two siblings: Jazmine and Tyler. She is planning on majoring in elementary education when she arrives at school.

Molly Fogarty joins the Sycamore family all the way from Salmon Arms, British Columbia where she attended Salmon Arms Secondary. She swam for Columbia Shuswap Selkirks during her high school career in distance freestyle, butterfly and individual medley. She earned the Hardest Trainer Award in 2017 and 2018, the Best Teammate Award in 2017 and 2017, the Champion of Character Award in 2015 and 2016, and the Heart and Obsession Award in 2012. Fogarty is the daughter of Sandy Little and Reg Fogarty and has two brothers: Sean and Rory Fogarty. She plans on double-majoring in biology and pre-medicine when she gets to ISU this fall.

Margaret Gray comes to ISU from Toronto, Canada where she attended North Toronto Collegiate Institute. During her time in high school she swam in butterfly events for the Toronto Swim Club and earned several honors such as the Coach’s Award, Most Improved Swimmer and the President’s Cup Award. Gray is the daughter of Timothy and Louise Gray and has two older brothers: Alexander and Christopher. When she arrives on campus during the fall she plans on majoring in criminology to further her goal of becoming a forensic psychologist or lawyer.

Victoria Johns joins the Sycamores from Carmel, Ind., where she attended Carmel High School. At Carmel, Johns swam in the backstroke, butterfly and freestyle events and lettered all four years of high school. She is accustomed to winning championships, as she was a member of four state champion teams while at Carmel. She qualified for the Indiana Senior State Championships in the 100, 200 and 1000 freestyle and 100 and 200 backstroke. Johns also swam for the Carmel Swim Club. She is the daughter of Christopher and Laura Johns and has two sisters: Audrey and Madison. Johns intends to major in speech pathology when she arrives on campus this fall.

Kozel comes to Indiana State from Fort Wayne, Ind., where she attended Carroll High School. In high school she lettered all four years and was a sprint swimmer with a focus on the 100 freestyle and 100 backstroke. During her senior year she placed second in the 100 freestyle and fourth in the 100 backstroke at sectionals while her team also placed third at the state meet. Overall, she was a member of two sectional championship teams. Kozel also competed in club swimming for the Fort Wayne Swim Team where her team captured numerous senior state meet titles. Kozel is the daughter of Robert and Anista Kozel and has two siblings: Makayla and Mason. When she arrives on campus this fall she plans on majoring in nursing.

Kaimi Matsumoto comes to Indiana State from all the way from Wailuku, Hawaii where she attended Baldwin High School. She was named the Baldwin MVP for swimming during her junior and senior years and holds three Maui Interscholastic League records. During her junior year she claimed the state championship in the 200 IM and she was a member of four MIL championship teams. She also swam for the Maui Swim Club during her high school tenure and won the Ken Suenaga Invitational Award three years in a row, was named a state champion, won the Sakamoto Invitational Award three years in a row and earned the True Grit Award. Matsumoto is the daughter of Linda Matsumoto and she has three siblings: Brandon, Kiakahi and Ponia. While at ISU she plans on studying applied medicine.

Meienburg joins Indiana State from Napoleon, Ohio, where she attended Napoleon High School. She lettered all four years in diving as well as four years in gymnastics and two in soccer. During her senior campaign she campaign she was named the Most Valuable Diver and was a district and state qualifier. Her high school team captured the Northern Lake League championship and placed seventh at the Division II State Championships. Overall in her career she was a four-time state qualifier, school record holder, sectional champion, and twice named the Most Valuable Diver. Meienburg also competed for the Napoleon Diving Club where she was a two-time diving AAU national qualifier. She is the daughter of Brent and Gretchen Meienburg and has two siblings: Derek and Brock. When she arrives on campus this fall she intends to major in nursing.

Madison Misko joins the Sycamore Swimming & Diving program from Greenfield, Wis., where she attended Greenfield High School. During her high school tenure she primarily swam in sprint freestyle and sprints butterfly events. She earned Honorable Mention All-State honors during her senior season in the 50 and 100 freestyle and she also earned Athlete of the Week honors from the Journal Sentinel. Her team finished as the sectional champions during the 2018-19 season. In addition to swimming for Greenfield High School, Misko also competed as a member of the Schroeder YMCA Swim Team. Misko is the daughter of Chez and Wendy Misko and has one sister, Mariah. She plans on majoring in special education when she starts school in the fall.

Sarah Moreau comes to Indiana State from Tours, France where she attended Saint Georges sur Cher. She swam butterfly and freestyle events for Lycee Grandmont Tours Cedex 3, recently competing at the Championnats Régionaux PACA where she recorded times of 29.18 and 1:02.72 in the 50 and 100 fly, respectively. She also earned a seventh place finish at the XVes Championnats de France en bassin de 25m in the 200 fly in November of 2018. Moreau is the daughter of Thierry and Isabelle Moreau and has one sibling, Julien. When she arrives at Indiana State she will study chemistry.

Colleen O’Connor joins the Sycamore family from Yorkville, Ill., where she attended Yorkville High School. She focused on freestyle and individual medley events while at Yorkville and lettered all four years in the program and was the team captain. O’Connor gathered numerous awards and honors during her senior season, including the All-Athletic and Academic Conference Award, MVP at both conferences hosted by Yorkville and was voted the most accomplished swimmer of her high school team. She was also a state qualifier and conference champion in the 100 butterfly (twice), 50 freestyle and 200 individual medley. She rewrote her school’s record book as well, holding the school records in the 100 breaststroke, 50, 100 and 500 freestyle, 200 individual medley, 200 freestyle relay and 200 medley relay. While swimming with her club team, Delta Aquatics, she was a five-time state qualifier, three-time speedo sectional qualifier and three-time individual high point award honoree. O’Connor is the daughter of Sean and Meaghan O’Connor and has two siblings: Riley and Erin. She intends to pursue a nursing degree at Indiana State.

Andrea Putrimas joins the Sycamore Swimming and Diving program from Toronto, Ontario where she attended Bishop Allen Academy. Putrimas also swam for Toronto Swim Club during her high school years, most recently competing at the Canadian Swimming Trials where she placed 35th in the 400 free. During the summer of 2018 she also competed at the Irish Summer National Championships where she earned top-three finishes in the 400 free, 200 fly and 400 IM while also winning the timed finals in the 800 free. Andrea is the daughter of John and Edita Putrimas and she has one brother, Paul. She plans on studying international business when she arrives at Indiana State this fall.

Rachel Sanqunetti comes to Indiana State from Cicero, Ind., where she attended Hamilton Heights High School. When in high school, Sanqunetti swam in backstroke and freestyle events and was a four-year letter winner. During her senior season she was named the team captain and MVP to go along with her Academic All-State honor. She also was the conference champion in the 200 freestyle and 100 backstroke, events in which she also owns the conference record and school records. Overall she earned seven conference titles and holds four school records in addition to being named the MVP all four years. She also swam for the club team Power Aquatics where she holds the club record in the 100 and 200 free, 100 and 200 back and100 fly and 200 individual medley. She was also a four-time speedo sectional qualifier, two-time futures championships qualifier and a two-time American Jr. National qualifier. Sanqunetti is the daughter of Doug and Carol Sanqunetti and has one brother, Andrew. When she arrives on campus she plans on majoring in exercise science and pre-physical therapy.

Rhiannon Wozny joins the Sycamore Swimming and Diving program from Charlotte, N.C., where she attended Providence High School. During her high school tenure Wozny was a four year letter winner and was named to the All-Conference team all four years as well. She had also been named to the All- Regional and All-Sectional team while in high school and she was named the Newcomer of the Year twice. During her senior campaign she was named the senior captain and qualified for the state meet in the 200 and 500 free as well as the 200 and 400 free relays. She also swam for SwimMAC Carolina during the club season. Wozny is the daughter of Michael and Stephanie Wozny and has one sister, Makenna. At Indiana State she plans on majoring in architectural engineering technology.