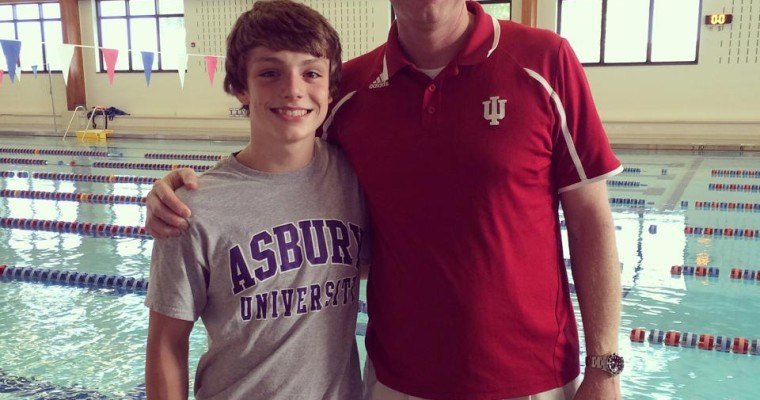 Indian Creek High School in Trafalgar, Indiana has renamed its swimming pool after swimmer Chase Smith following his recent re-diagnosis with cancer. Archive photo via The Smith Family and the #ChaseStrong Facebook Group

Indian Creek High School in Trafalgar, Indiana has renamed its swimming pool after swimmer Chase Smith, officially declaring it the Chase M. Smith Natatorium in a ceremony on August 2.

Smith was diagnosed with cancer in his left femur back in 2014 at just the age of 13. His battle and his dedication to continue swimming throughout his treatment process earned him national attention from swimmers and clubs across the country, who rallied around his campaign #ChaseStrong.

Smith initially defeated his cancer, but in April his story was brought back into the spotlight once he was given 5 months to live after tumors from Ewing’s sarcoma spread throughout his body.

Shortly after receiving the news, Smith married his longtime girlfriend Saddie Mills in a ceremony performed in Mills’ driveway.

Just as they had before, Smith’s community rallied around him in support of his battle, sparking the pool dedication ceremony.

At the ceremony, Smith’s father and coach Brad Smith told the crowd, “Chase, there is no one that deserves this honor more than you. We have had many great swimmers come through our program and you are all a part of Chase. But Chase you stand out through your crazy obsession of the sport, your complete devotion to the team, your persistent drive for excellence, your incomparable leadership and your continuous fight to beat the odds.”

Indian Creek’s Athletic Director Derek Perry gathered the family and revealed the plaque dedicating the pool to Smith, which displays the words Smith spoke after learning about his diagnosis, “The precious people in your life, the amount of time they are in your life, take every moment you have. Enjoy and give everything you can in those relationships and know there is so much possible with love when your love includes God.”