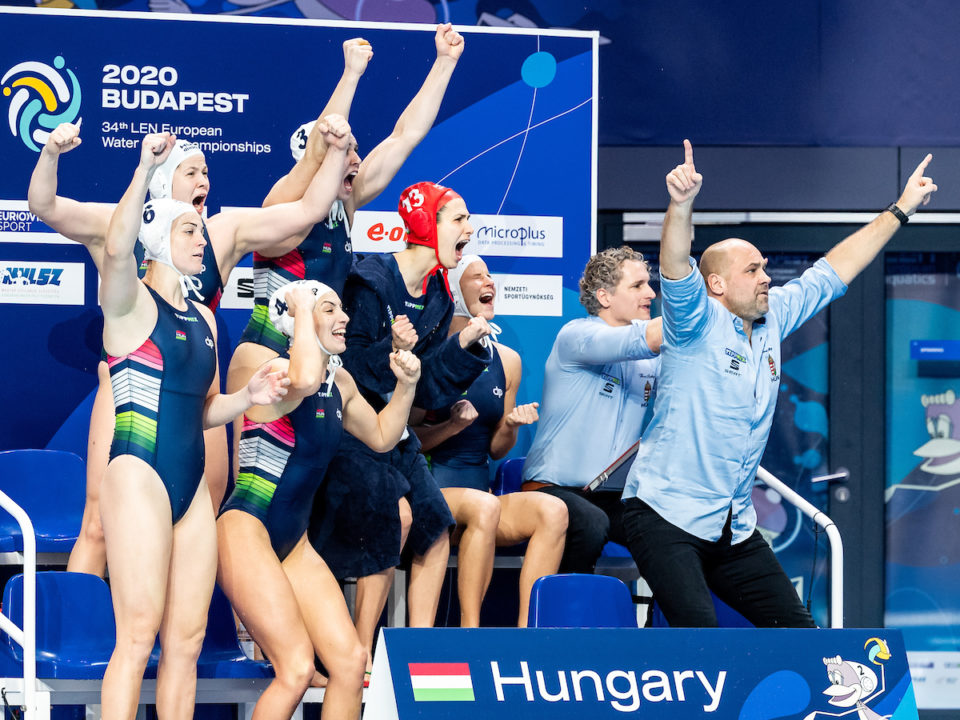 Hungary clinched the first place in Group A after winning a brilliant game against Greece. Current photo via Giorgio Scala / Deepbluemedia / Insidefoto

Hungary clinched the first place in Group A after winning a brilliant game against Greece. The other favourites all blew their respective rivals away, Russia scored 34, the third best effort in the all-time single-game scoring rankings. Slovakia wrote history by claiming a historical first win at the European Championships, it came at the expense of Serbia.

Another thrilling evening took place in the Duna Arena where 3,000 fans went wild as Hungary was rushing to an 11-6 lead against Greece in the fourth period of the game which was crucial in wake of the final rankings in Group A.

The match was a masterpiece of women’s water polo, the action-packed opening period saw 4 goals apiece as the offences were devastating at both ends. With two quick exchanges the sides reached 6-6 by the middle of the second, then Hungary’s defence started clicking – and that froze the Greeks for as long as 13:53 minutes.

During this phase the home side netted 5 in a row – their New-Zealand born centre-forward Rebecca Parkes was outstanding in front of the goal, scored two action goals and a man-up – so they led 11-6 early in the fourth. Then the Greeks came back to life and by hitting three in a span of 94 seconds they came back to 11-9. They even killed a double man-down but couldn’t add one more and with 3:04 to go Krisztina Garda’s magnificent shot from 7m (her 4th goal in the game) killed the Greeks’ momentum. Margarita Plevritou buried a
man-up 1:38 from time but Dora Leimeter also sent the ball home in a 6 on 5 to secure the Magyars’ win and their top spot in the group.

The preceding match was also an exciting one as Slovakia managed to beat the Serbs and claim its first ever victory in the history of the Europeans. The only new team of the field – compared to 2018 – had one appearance before, in 1993, when they lost all their six matches in Leeds. Here they lost three more – as expected against the giants of the group – but now they seized the opportunity and outplayed the Serbs in all aspects of the game. The defences were outstanding, especially Slovakian goalie Kristina Horvathova, who
finished the match with a sensational 88.2% saving percentage (14 stops on 16 attempts, including a penalty catch). The Serbs could score at 2-0, after 13:24 minutes, but then they sank and their following (and last) goal came at 6-1, 24 seconds from time, after another scoreless period of 18:12 minutes. This has set up an ‘all-in’ match between Slovakia and Croatia for the 4th place and a spot in the quarters.

The other encounters were even more one-sided than in the initial phase of the tournament. As the heavy favourites are gearing up and getting their right rhythm, the lower ranked sides are finding harder and harder to score against them. The Germans could net four against Spain, but Croatia, France and Israel was limited to a single goal in their respective matches.

The Russians bettered their own scoring record in Budapest as they netted 34 against Croatia (hit 31 against Slovakia on the opening day, and now already stands with 100 goals). This was the third-best offensive effort in the history of the Europeans – the Netherlands 37-goal blast against Sweden in the first edition in Oslo 1985 is still a standing record, the Russians came close in Barcelona 2018 when they scored 35 against Turkey.