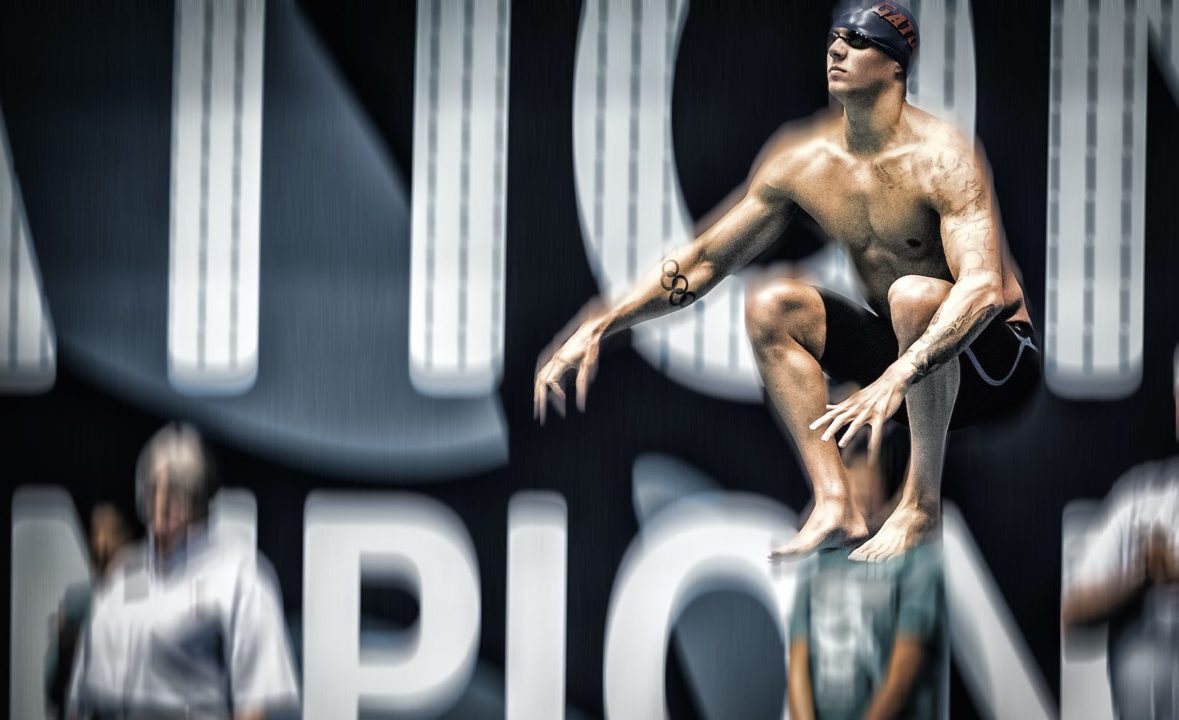 The average vertical leap for an NCAA basketball player is 30 inches. Caeleb Dressel tops out at a whopping 41 inches. Archive photo via Mike Lewis/Ola Vista Photography

Per this article, Jordan’s 46-inch vertical is tied for the best in NBA history with Zach LeVine and James White, while Dressel’s 41 would rank in a tie for 12th with Isaiah Rider and O.J. Mayo.

Check out this video of a few times Dressel has shown off his insane vertical prior to racing via ZHL Swimming on YouTube:

This ability has helped Dressel develop the most explosive start in the world, instantly giving him a lead over his competitors.

Particularly crucial in short course swimming, Dressel’s start has helped him set NCAA, U.S. Open and American Records in the SCY 50 and 100 freestyle, 100 breaststroke (which has since been broken), 100 butterfly and 200 IM, not to mention the world record in the SCM 50 free.

In long course, he owns the world record in the 100 fly, while also holding the distinction of being the fastest swimmer of all-time in a textile suit in both the 50 and 100 free.

To read more about Dressel and why his start is so lethal, read Olivier Poirier-Leroy‘s story from October of 2018 here.

Part of this story appeared in the 2017 College edition of SwimSwam Magazine.

I remember 41 inches from a few years ago, I’m sure it has improved.

How does this compare to say a track field athlete?

32
-1
Reply
remel can do anything
Reply to  Xman

Not sure what the verts of a 100/200m type guy in track would be, but from what I’ve heard, football players (specifically WR and CB) have even higher verts than most NBA guys because the aerobic demands of their sport are much lower and therefore they are more powerful.

Doubt it. The Vertical is way more applicable for NBA players. You probably have a higher average vertical in the NFL if you just measured skill players. But I think NBA players focus on improving that way more

It might be more applicable but when you’re 7ft tall you don’t really need to be able to jump that high to do most things in basketball. The average player height in the NBA is 6’7 so most players can dunk with around a 24 inch vertical when their arms are above their head. The average NFL height is around 6’1 and since they’re more focused on developing power it would make sense their vertical jumps could be higher on average

I think this is part of it. the other thing is that I think there’s more of a need for a high vertical in football. In basketball, basically all of them can dunk at 60% effort or less. Sure, there are advantages to being able to jump higher than the guy guarding you, but in general there’s not a huge need to be in the 40s if you can easily dunk and I don’t think vertical is one of the gatekeeper stats when trying to get drafted in the NBA. In football, even the best QB is gonna overthrow sometimes, so a receiver has got to be able to get there (or if you’re on defense you’ve got to be… Read more »

The nba just doesn’t rely as heavily on numbers. Kevin Durant couldn’t bench press 135 at his combine, but if you can ball, you can ball. it’s definitely not because they don’t need a high vertical in basketball.

Most players on a basketball court are jumping at full power on most possessions at some point.

I think it was 185, and he got no reps. I remember talking to the Boston Celtics training staff years ago when Al Jefferson was drafted (6’10 250) out of high school and he could barely do 185, a year later he could rep out 225 and i think maxed out around 300. Most of the guys above 6’7 don’t really hit weights till they stop growing. I know growing up (I’m only 6’5) people always said starting to early will stunt your growth (they also said the same about drinking coffee)

I don’t think it was because of stunting your growth now though. I think it has to do with the body growing. I wish I didn’t start drinking coffee so early on in life. I want to be taller!

185 and he was a 19 yr old 7 footer. FYI bench press is significantly harder the longer your arms are

46 for Zach Lavine is crazy. no wonder hes … a good dunker

Swim Swam just walked into the obligation of a swimmer dunk contest.

I’m picturing Matt Grevers grabbing Elvis around the waist and lifting him to the rim like a little kid so he can dunk.

Way to come on here and make it about you, Elvis…

This is a swimmer: https://youtu.be/rnIdzfpQvdM

I swam d3 (just for the sake of context, we didn’t have NBA caliber athletes) and could out dunk anyone on the basketball team. windmill, reverses, double pumps/clutches -can’t turn off an athlete

1. Any official evidence or video of Dressel’s 41 inch vertical?
2. What he does before the race is not vertical jump. It’s more like a box jump without a box. Most active young males can box jump over 40” with little practice. That doesn’t translate into as high vertical jump.

No doubt Dressel is one of the most explosive swimming dudes but we need to see that 41.

100% he is explosive for sure. But I have not seen any evidence of 41 inch vertical… Box jump is different..

Really surprising there isn’t one in the IG, Twitter, YouTube era. How ’bout SwimSwam just straight up ask him how high his vertical jump is and if he had any videos of him jumping or dunking?

FWIW, Matt Delancy was on the SwimmerJoe show a couple weeks ago, and said Dressel came in as a freshman with a 33′ vert and left as a senior with a 41′ vert.

Matt Delancey is the best swim S&C coach in the world. He knows what the difference between a box jumps and vertical is.

I’m sure there are a lot of other S&C coaches out there that also know that difference.

11
-1
Reply
JP input is too short
Reply to  Eugene

Yeah, not a chance that’s a box jump number. Ato Boldon was box jumping 60in in retirement, and I believe a British sprinter called Dwain Chambers box jumped almost 70in a few years ago. Anybody healthy and active with a bit of teaching could box jump 41 inches.

Another great swimmer with an insane vertical leap/strength is Carsten Vissering. I think his vertical is over 40″ as well

I believe David Thompson had a 48 inch vertical leap

LOL. I’m 50 years old and could dunk today with the trampoline Spud uses in that video.

That doesn’t distract from the fact Spud’s hops were amazing back in the day. The show he put on in dunk contests in the mid 80s was jaw dropping.

The Spud Web video was a spoof. He jumped off something to finish that dunk.

It’d be really interesting to see a proper analysis and breakdown of Caleb’s start-underwater-breakout. I might be completely wrong, but I get the impression his biggest advantage isn’t off the blocks but the underwater as there are so many races where he’s equal to the others just as they hit the water, but the first four to five meters he just slips a yard ahead of them.

He’s hitting the water much more momentum than other swimmers. The arm recovering over (like Brad Tandy) is great because it carries his momentum forward. Swimmers who stop their arms and bring them forward under there body are negating some of that kinetic energy. He takes his time on the block to build that momentum which is why he isn’t the first into the water but that speed combined with a monster DK make him come up a body length ahead.

Actually, he’s better than everyone else in hitting the perfect line instantly after full submersion, therefore being able to transfer the energy from the blocks to the pool (or more accurately, losing less energy) than everyone else.

Not accurate. I have video showing him entering at a point about 6 inches shorter than Cullen Jones (50Fr Semifinal at 2016 OTs). By the frame that they both were fully submerged, Dressel was already ahead of Jones.