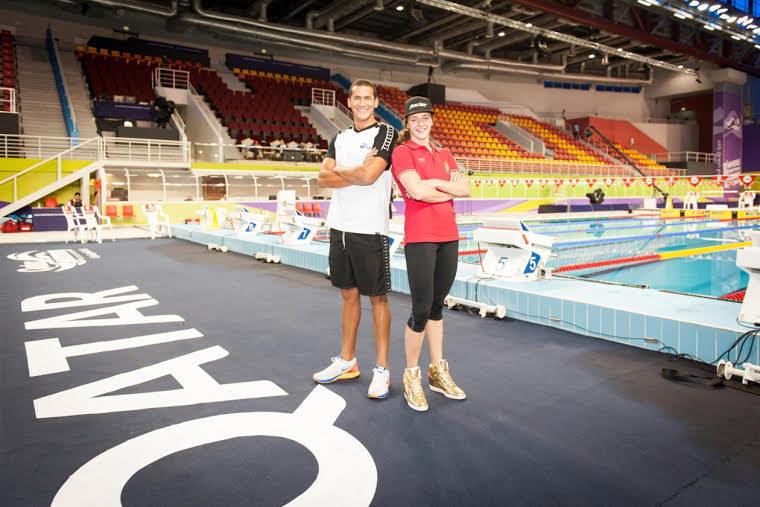 Ous Mellouli (left) and Katinka Hosszu (right) are being raised as the stars of the first stop of this year's World Cup Series, and so far they've delivered, despite a sleepy day 1 prelims in Doha. Current photo via 0Stephen Reid/Hill+Knowlton

The 2014 FINA World Cup Series began on Wednesday morning in Doha, Qatar with the first of 7 meets that will award roughly $2 million in prize money between now and December.

In the first of two days in Doha, preliminaries began Wednesday morning, and the highlight so far (as it will be for much of this series) was Hungarian Katinka Hosszu beginning her big event lineup that will include at least 9, and more likely 10-plus, entries.

The first of those was the best so far, as she took the top seed in the women’s 200 free in 1:51.84. That broke the World Cup record set by American Allison Schmitt in 2011 at 1:52.08, with Hosszu sprinting out front early. That time now moves Hosszu within a second of the World Record in the event: a 1:51.17 done by Italian Federica Pellegrini.

It also broke Hosszu’s own Hungarian Record of 1:52.32, set a year ago at the Berlin stop of the World Cup.

She had nearly a seven second margin on anyone in the field, so this will be an opportunity to save some energy in finals, though she can’t play too much with countrymate Evelyn Verraszto sitting 3rd in 1:59.76.

Hosszu had three other morning swims, both of which saw her way safely through to finals. In the women’s 100 fly, Inge Dekker took the top seed in 57.66, with Marieke D’Cruz (58.15), Danielle Villars (58.75), and Hosszu (59.44) all close behind. That race came just 12 minutes after the 200 free, so cruising in the 200 free final to push ahead in this 100 fly in the evening session will make more sense, from a prize standpoint, given the relative levels of competition.

American Tom Shields began his meet by taking the top seed in the men’s 200 fly in 1:55.08. The U.S. National Champion this year in the long course versions of both the 100 and 200 meter butterfly events, Shields is the biggest name in this 200 fly, with Le Clos skipping the event here in Doha despite being the best in the world in it.

The two seeded just behind Shields are Russians Aleksandr Kudashev (1:57.16) and Nikolay Skvortsov (1:57.29), with Skvortsov having the fastest time of any European on his record from the 2013 season.

Also of concern are Serbia’s Velimir Stjepanovic (1:57.35), Poland’s Pawel Korzeniowski (1:57.53), and Hungary’s David Verraszto (1:58.81) are the 5th, 6th, and 7th seeds. There was a lot of coasting in this prelim with only 9 guys fighting for 8 spots (and with one of those 9 being a local Qatari who was 13 seconds behind the rest), so at this point qualifying times to the final don’t mean much.

Ous Mellouli made his big return to competition after missing out on Pan Pacs due to visa issues with a 3:47.73 in the men’s 400 free prelims. Mellouli, as the ambassador to the 2014 World Short Course Championships that will be swum in this same pool in December, has additional benefits to be gained from a good performance this week besides the World Cup prizes. Good swims from the Tunisian could raise his celebrity profile in the region and continue to build buzz ahead of Worlds.

He won’t have any easy road to the title in this, his first event, though. Also making finals in 4th is Australian Thomas Fraser-Holmes (3:48.51) and the European Champion last week in the 400 free in long course Velimir Stjepanovic (7th – 3:51.54).

Also making the final in this event is both Americans: Cody Miller is the 4th qualifier through in 2:08.23 and Mike Alexandrov is 5th in 2:08.95. They’re both great in short course, although this is just Miller’s 3rd time racing in a short course meters pool.

Miller didn’t swim the 50 breaststroke on Wednesday morning, but Alexandrov did, taking the 4th spot into the final with a 27.10. Fabio Scozzoli (26.60), Roland Schoeman (26.72), and Martin Schweizer from Switzerland (26.97) are the swimmers ahead of him. Among those missing the final was Trinidad & Tobago’s George Bovell (27.51), though his real focus was the 100 IM prelims where he took the top seed in 54.81.

That was the story of the first prelims session of this meet. With very little competition for the top stars here in Doha, great prelims swims weren’t expected, and outside of Hosszu’s opening 200 free they didn’t really happen. When the real money is on the line in finals, expect more of the stars to come out.

Finals will begin at 6PM local Doha time, 11AM Eastern Time in the United States, and at 1AM in Sydney, Australia.