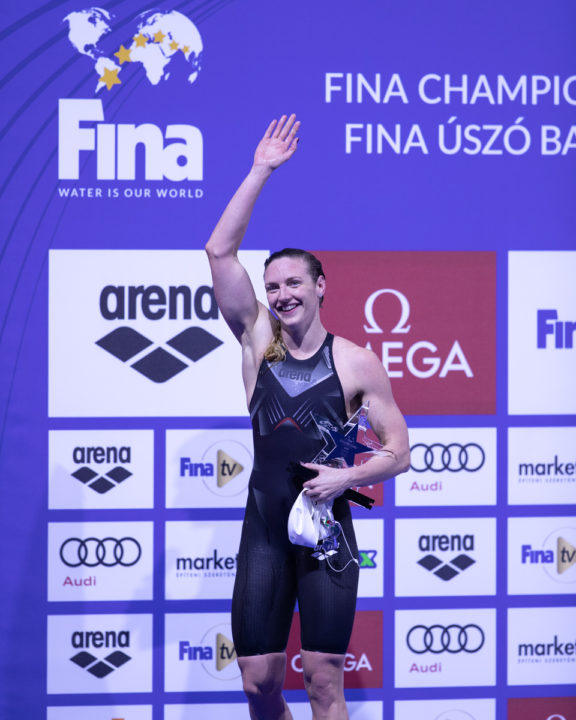 Katinka Hosszu takes 400m IM gold yet again, this time at the Berlin stop of the FINA World Cup Series, where Italy's Ilaria Cusinato was also in the mix. Archive photo via “Rafael/Domeyko Photography”

While the second meet of the International Swimming League’s (ISL) inaugural season is underway in Naples, Italy, the fast times keep rolling on day 2 at the FINA World Cup Series in Berlin.

Already, Dutch speedster Kira Toussaint fired off her 2nd national record of the meet, this time clinching gold in the 100m back in a lifetime best of 59.46. That took .10 off of her previous NR time of 59.56 clocked just last week at the Budapest stop of this cluster #2. You can read more about Toussaint’s swim here.

Securing silver behind Toussaint tonight was Canadian swimmer Taylor Ruck, with the Stanford Cardinal hitting the wall in the only other sub-minute time of the field in 59.84. Splitting 29.02/30.82, Ruck was about a second off of her lifetime best of 58.55 clcoked this past April, a time that renders Ruck as the 2nd fastst Canadian female ever in the event.

Hosszu had earlier done damage in the women’s 400m IM event, taking the gold in a convincing time of 4:38.15 to beat the field by almost 6 seconds. The Hungarian World Cup mainstay was faster in her home country last week, with her 4:34.37 winning effort there falling within 2 seconds of the World Cup Record of 4:32.30 she set at the Tokyo stop this year.

400m IM silver tonight went to teammate Zsuzsanna Jakabos, as it did last week, with Jakabos nailing a time of 4:44.06.

Tonight then marked the first time that Hosszu and Cusinato shared a podium since Cusinato has paired up with Hosszu’s ex-husband and previous coach, Shane Tusup. Cusinato is among a small training group that also includes David Foldhazi and Liliana Szilagyi.

Of note, Spaniard Mireia Belmonte was set to race but indicated on her social media accounts that she is battling a stomach ailment.

The men’s 1500m freestyle saw host country swimmer and 2019 World Champion in the event Florian Wellbrock produce a time of 15:10.82 for gold. That was good enough to hold off Spanish swimmer Albert Escrits who closed in on Wellbrock with an effort of 15:12.15, while Frenchman David Aubrey also landed on the podium in 3rd place in a time of 15:13.14.

Wellbrock was much quicker in Budapest, where his 1500m freestyle winning time of 14:57.83 was within range of Italian Gregorio Paltrinieri’s World Cup Record of 14:55.06 that’s been on the books for 4 years.

Wellbrock owns the German National Record with the 14:36.15 he registered at the 2018 European Championships. He came within a hair of that time in Gwangju, claiming gold in a mark of 14:36.54.

Spain’s Jessica Vall greatly improved upon her 4th place finish from last week in the women’s 100m breast to a gold medal-worthy outing tonight with a time of 1:07.76. Splitting 32.47/35.29, Vall touched just .02 ahead of Japan’s Miho Teramura who settled for silver in 1:07.78. Germany’s Anna Elendt registered 1:08.87 for bronze tonight.

Vlad Morozov got the job done in the men’s 50m backstroke, reaching the wall first in a mark of 24.75. That held a .22 advantage over American Michael Andrew who touched in 24.97 for silver. Andrew set a PB of 24.39 in this event at the Sette Colli Trophy over the summer.

Russian Grigory Tarasevich, who will soon be Andrew’s teammate on the NY Breakers roster, rounded out the top 3 in 25.14. He was the World University Games bronze medalist this summer in 24.94 after notching a lifetime best of 24.64 in that meet’s semi-finals.

Morozov also took the men’s 100m freestyle as the last individual event of the night, clocking a winning effort of 48.02, just off his 47.99 gold medal-worthy swim from Budapest.

Newly-minted World Record holder in the 200m fly, Kristof Milak of Hungary, couldn’t stay away from his pet event for very long, as the 19-year-old ripped a 1:55.47 to easily claim victory here in Berlin. Splitting 55.34/1:00.13, Milak finished almost 2 seconds ahead of runner-up Ramon Klenz and his time of 1:57.34.

Italy’s Federico Burdisso earned bronze in 1:57.78, a solid time from the Northwestern-bound teen. Burdisso finished 4th in this event at this year’s World Championships, registering his Italian standard in the 200m fly of 1:54.39.

What Mrs. Race is trying to draw our attention to is that Hosszu and Cusinato are on collision course with the pace of 6sec per meet. Big Bang is ahead that will shake Swimswam’s comment section. 😀

I got popcorn and lawn chairs for everyone