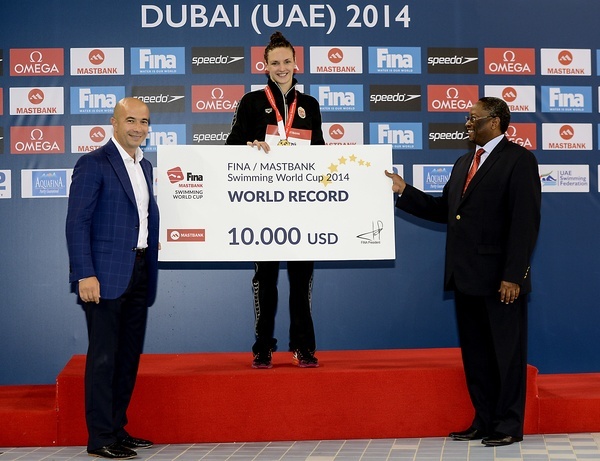 Katinka Hosszu has earned $50,000 in world record bonuses and added a $50,000 cluster bonus to jump to $125,000 in total winnings just two meets in to the World Cup circuit. Current photo via G. Scala/Deepbluemedia

The Dubai stop of the World Cup tour signals the end of the first cluster. The 7-meet series is broken into three separate “clusters,” with cash bonuses given to the points leaders of each individual cluster.

Those bonuses are where the real money of the World Cup tour are. The top 6 men and women in overall points earn cluster bonuses in the following amounts:

Hosszu, the current series points leader, used that $50,000 bonus to break into six-figures of winnings with 5 meets (and two more clusters) left to go on the series.

You can view the current points standings here.

The full money lists are below, including each athlete’s total, the chunk of that money they brought in at the Dubai meet over the past two days, and what their cluster bonus was, if they received one.

The World Cup now goes on hiatus until September 29th, when the second cluster begins in Hong Kong.

It baffles me that more high level swimmers don’t take part in the World Cup series, particularly Americans. Swimming is not an easy sport to make a living in and when you have an opportunity like this it seems to me that you should jump at it. I understand Michael Phelps, Ryan Lochte, and Natalie Coughlin not taking part as they have probably made enough money from the sport to be fairly comfortable, but for any other non amateur athlete who could be placing near the top, why not make some money? Matt Grevers, Nick Thoman, Jessica Hardy (who I know has taken part in the past), Tyler Clary, Tim Phillips, and probably a few others I’m forgetting could all… Read more »

Agreed. And with Coughlin not being on the US team for the next two years, it would have given her some quality races vs waiting for the Grand Prix to come around in late fall. I absolutely do not get why more post grads don’t race these events – does anybody know if Speedo, Arena, etc covers flight and hotel for their swimmers (I can see that making a difference if you had to cover sans US Swimming stipend)? If they do (and I’m sure it’s contract dependent), why not go? You get to race, you can win some cash right now, it seems like a lot of the AUS and USA women are just contributing to Hosszu’s retirement account… Read more »

She’ll probably be on Pan Am team

I hope so; if only for the leadership but Schmidt is another, etc.