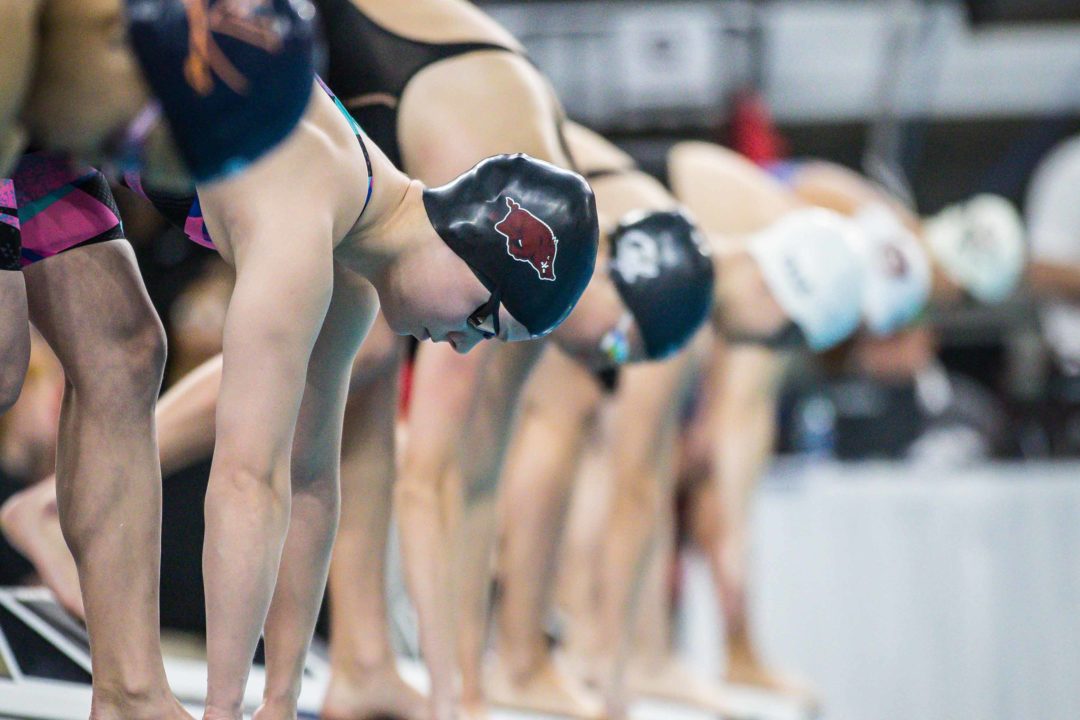 The Arkansas Razorbacks hosted Drury and Oklahoma Baptist in an unscored triple meet Saturday at Arkansas. On the women’s side, senior Anna Hopkin led the Razorbacks’ dominant effort, as they came away with wins in all except three events.

FAYETTEVILLE, Ark. – Competing in their last meet at the Health, Physical Education and Recreation (HPER) Building, the three members of the senior class took home a total of eight podium finishes, including to two new pool records by Anna Hopkin.

Hopkin did not disappoint, posting two new pool records in the 50 free (21.58) and shortly after in the 100 free (47.40). The senior has had a stellar career as a Razorback, breaking four individual school records a total of 15 times along with being a part of three school record relays that have been broken seven times.

“It was a great day for all three of our seniors. They all stepped up, performed well and made some lasting memories on a great senior day! It was very fitting that Anna, Dalton and Carly were on the final winning relay together to finish the meet in style. Anna was amazing in the 50 and 100 today. She broke the pool records which are all from previous SEC and NCAA Championships. The team has been practicing well and we are all focused on our final three meets heading into the SEC Championships.”

“I was excited to see the hard work pay off for both Esti and Josie. It was nice for them to be able to compete at home again!”

The Razorbacks will be in action next Friday, traveling to Houston for a dual meet.

FAYETTEVILLE, Ark– The Drury men’s and women’s swimming & diving teams won 20 events at the Arkansas Tri meet on Saturday.  Both Tori Sopp and Oleksil Khnykin won three events to pace the Panthers in their impressive showing vs. Arkansas and Oklahoma Baptist.

Earl Cole, a freshman diver from Springfield Glendale, took home wins in both boards, winning the one meter (278.35) and the three meter (339.95).

Drury will be back in action on Monday when they host Missouri State at Breech Pool at 5 p.m.

FAYETTEVILLE, Ark. – After over two months off, the Oklahoma Baptist men’s and women’s swimming and diving teams return to action on Saturday afternoon in Fayetteville on the campus of the University of Arkansas. In the unscored meet, the Bison men faced off against Drury, while the women took on Drury and the host Razorbacks.

In the 200-yard medley relay, the women’s team of Julie Day, Chase Kirby, Jamie Edwards and Rosa Escalante placed sixth with a time of 1:53.99, while the men’s team of Daniel Santos, Thomas Peterson, Alfredo Arrieche and Hank Contich touched in 1:37.36 to place fourth. In the 400-yard free relay, a men’s team comprising of Contich, Arrieche, Kaiden Gonser and Santos finished fourth after clocking in with a time of 3:17.40. The women’s team of Laura Cifuentes, Edwards, Escalante and Day took eighth in the 400-free relay after posting a time of 3:47.00.

Clocking in with a time of 2:02.97, Laura Cifuentes placed eighth in the 200-yard free, followed by Summer Dietz in ninth with a time of 2:10.96. Daniel Santos had a strong showing for the men in the same event, claiming second after touching the wall in 1:45.60.

In the 50-yard free, Edwards was OBU’s top finisher for the women after posting a time of 24.70. Contich finished third after finishing in 22.17.

Claiming a third-place finish in the 100-yard free, Day led the way for OBU after finishing in 52.37. Santos was the men’s top finisher in the same event, posting a time of 46.96 to finish second.

Anna Kathleen Harris finished third in the 3-meter diving competition, scoring 176.05 through six dives. Cassidy Wright posted a score of 166.40, while Brianna Reece scored 163.05 and Mikaela Pitsch scored 117.75. Noah Harlow finished second on the men’s side after scoring 205.70, while Jordan Atkins posted a score of 132.15.

Those are incredible dual meet times by Hopkins. Well done!!