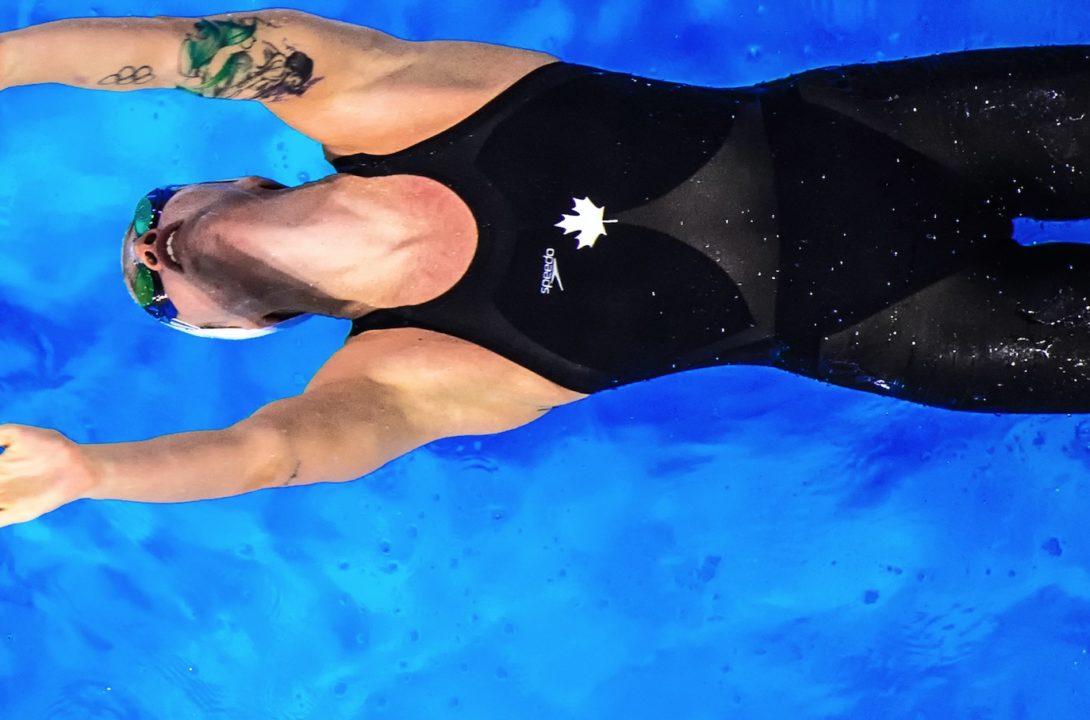 After competing in her first Games in 2012, Canadian backstroker Hilary Caldwell wanted nothing more than to get the Olympic rings tattoo. Archive photo via Mike Lewis/Ola Vista Photography

Can you name each member of the 2016 U.S. Olympic swim team? Test your knowledge in our latest and toughest swimming quiz.

With the world shutting down, we’re reaching into our archives and pulling some of our favorite stories from the SwimSwam print edition to share online. If you’d like to read more of this kind of story, you can subscribe to get a print (and digital) version of SwimSwam Magazine here. This story was originally published in the 2017 Tattoo edition of SwimSwam Magazine.

The Olympic rings tattoo is one of the most recognized in sport, signifying the athlete competed at the Olympics and is part of a rare, elite breed. After competing in her first Olympic Games in 2012, Canadian backstroker Hilary Caldwell wanted nothing more than to get the tattoo.

She remembers it clearly, entering the shop with fellow London 2012 swimmer Alexa Komarnycky, who had already gotten the tattoo. The tattoo artist saw Komarnycky’s Olympic rings and asked, “Did you go to the Olympics or what?”

“As athletes, I feel like a lot of us are like, ‘Well, that’s not OK.’ I guess if you don’t grow up around sport, you don’t know the association between getting an Olympic rings tattoo and doing the work.”

Along with the rings, Caldwell has plenty of other tattoos that have plenty of meaning to her.

Those familiar with the Red Hot Chili Peppers might recognize the lyrics “I’ll make it to the moon if I have to crawl” from the song “Scar Tissue.” It’s also Caldwell’s first tattoo. She said she got the lyrics from her favorite song when she was 18 or 19.

Tattoo No. 2 was the rings.

“That obviously had a lot of meaning, and when you make the Olympic team, you look forward to getting it,” she said. “That was a cool thing that I got to do when I made my first Olympic team.”

Caldwell’s third tattoo was a moose antler on the side of her neck — an inside joke with her mom, who calls her “moose.” She calls her mom “deer,” but her mom doesn’t have a deer tattoo.

Around the same time that Caldwell got the moose antler tattoo, she got a quote from one of her favorite childhood books. On her hip, it reads “It’s not the drizzle, but the hurricane.”

“In the book, it’s referencing: If people were rain, would you be drizzle, or would you be a hurricane? I’d always want to be the hurricane because I’d want to be somebody who makes an impact that you remember.”

Caldwell has a diamond on her rib cage — and while her previous tattoos had significant meanings, this one was just fun.

“A friend and I just went on holiday and got tattoos just for fun,” she said. “She was getting one, and she asked, ‘Does anyone else want to get a tattoo?’ and I was like, ‘Yeah, no, why not?’”

The next ink Caldwell got was a mermaid on her arm. It didn’t have a deeper message other than the symbolization between a mermaid and the pool, and she liked the look of it.

“I always wanted to be a mermaid,” she said. “I did a lot of research into the artist on that one, and I wanted to get it done as a piece of art — I wanted an aesthetic kind of look to it.”

Caldwell says this is the tattoo that has the most meaning to her besides the Olympic rings.

In April 2015, her longtime coach Randy Bennett passed away after battling cancer. He was one of Canada’s top coaches for years, and he had a huge impact across the country.

After he died, she wanted to commemorate him.

“All of us who had him as a coach wanted him to continue to live, and [to] take all the stuff that we got from him and that he taught us and use that,” Caldwell said.

Caldwell settled on “Make it so” for a tattoo, putting what she and other athletes who worked with Randy called a “Randyism” — one of Bennett’s sayings — on the back of her right arm. She said she picked that one partly because of its meaning, partly because it was one of the few Randyisms without swear words.

“He was such a big part of my life that I wanted to get that as a tattoo,” Caldwell said.