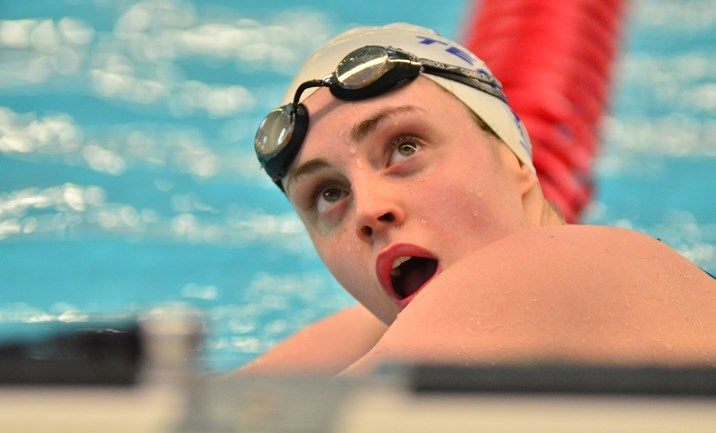 Kara Hanlon checks her time in the final of the 50m breaststroke and discovers it's another 17 years age group record, improving on the record she had set earlier in the heats Current photo via Scottish Swimming

The breaststroke record books will have to be re-written at the end of Day 5 of the Scottish National Age Groups Championships from the Aquatics Centre in Aberdeen.

During the heats, Kara Hanlon of Highland Swim Team broke the 17 years age group record for 50m breaststroke lowering the standard to 32.09.  She went even faster in the final with an emphatic victory over such a short distance. Her time for the title was 31.95. Emma Crawford of Edinburgh University won silver in 33.08 and Orla Adams the bronze in 34.22.

The Robertson household from South Ayrshire will also have plenty to celebrate today with both Katie and Erin winning gold and breaking records. Younger sibling Katie broke the 13 years age group record in both heats and final of the 50m breaststroke, the new national standard now rests at 33.79.

Big sister Erin did take the title in the 16 years age group category. She set a new Scottish National Junior Record in the heats of the 50m breaststroke with a time of 32.23.

Douglas Kelly of Milngavie & Bearsden broke two records this evening. Having broken the age group record in the heats of the 50m freestyle, the 11 year old went even faster this evening setting a new best time for the event of 28.34.

Not long after he broke the record for the 100m breaststroke after a convincing win, coming home in 1:19.12. Lewis Thomson of Midlothian won silver and Angus Allison of Inverleith the bronze.

The older athletes were also on good form.  Benedict Tortolano of Stirling produced a fantastic final 50m to take victory in the 100m breaststroke. Turning in 5th place he increased his stroke rate and moved through the field. Timing the final push to perfection, the 17 year old touched home first in 1:04.86. Euan Inglis of Edinburgh University was edged into 2nd place in 1:04.94, with Chris Kerr of Warrender in 3rd in 1:05.49.

The final race of the night saw another superb finish, this time from Tain Bruce of Carnegie in the 100m butterfly. Bruce turned at the 50m mark back in fourth but really pushed hard up the final length winning the title in 1:02.00. Jessica Christie of South Aberdeenshire won the silver medal in 1:02.44 and Harriet West of City of Leicester the bronze in 1:02.59.

The full results service from the meet can be found athttp://www.swimscotland.co.uk/meets%2015/SNAGs15/

Session times for the event are as follows:

More information about the event and daily summary reports can be found at/snags or www.facebook.com/scottishswimming

The event can also be followed on social media by using #SNAGS2015 as hashtag, as well as on Scottish Swimming’s website, www.scottishswimming.com.  And to bring all social media coverage together in one place check outwww.swimbuzz.co.uk