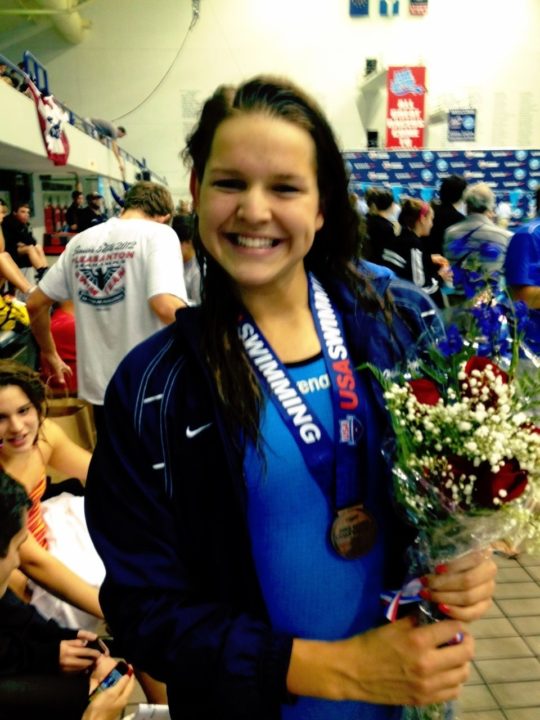 Heidi Poppe has verbally committed to Stanford. Her impact will be felt right away, her incoming time in the 100...

Heidi Poppe has verbally committed to Stanford. Her impact will be felt right away, her incoming time in the 100 breaststroke is only .2 seconds away from what it took to score at the 2012 NCAA Championships.

“I really wanted the total package, school and swimming alike. I feel that Stanford is the best place for me to achieve that.”

Poppe has a very specific set of skills that almost every team in the country is looking for right now: breaststroke. She’s the number 2-ranked 100 yard breaststroker in the class (behind Indiana’s Bethany Galat, but not by much).

Her best time in the 100 yard breaststroke would’ve put her 20th at last year’s NCAA Championships, though it’s likely that next year’s women’s breaststroke races won’t be quite as deep as the 2013 meet was.

Poppe has shown a propensity to swim well in big meets: she’s a two-time champion at the North Coast Section California Championship meet and the defending Winter Junior National Champion in the 100 yard race. She also split a 27.53 in the 50 breaststroke at this year’s NCS Championship meet for San Ramon Valley High School.

She will join a very crowded breaststroke group that includes already sophomore Sarah Haase and junior Katie Olsen, among others.

Poppe is on the younger end of this class. She trains with the Crown Canyon club team.

Poppe will be joining Janet Hu and Lindsey Engel, two young stars who have also verbally committed to Stanford.

My Cardinals are returning to glory! (at least the women’s team) S M is next!

It Stanford has Miss Manuel, it’s game over for the other teams.

Stanford didn’t put too much thought on this one. Poppe had one good SC season and doesn’t do well in any other stroke except BR. Go Cal!

That’s silly and wrong, but I will try to take the high road and presume this comment was intended to be “tongue in cheek” or you are just an imposter posing as a Cal fan.

If you really were a Cal fan you would know that in the past two years Poppe has consistently outperformed Taylor Young, Cal’s talented incoming breast stroke recruit.

College rivalries can be fun, but bagging on a 16 or 17 year old for choosing her dream school is waaaay over the top.

What a moronic comment. I’m personally happy she didn’t go to Cal just for that reason right there. NO CLASS! I hope Stanford makes you pay for that thoughtless, stupid, comment. She’s a teenager for crying out loud! Idiot.