Australian swimming superstar Grant Hackett capped off what must be described as a successful return to competitive swimming after a 6-year retirement...

The man who took 100m free gold in Rio, Kyle Chalmers of Australia, will be racing ‘off’ events of the 400/800 freestyle this weekend, according to entries. 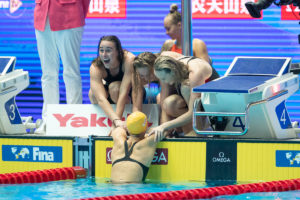 World Record holder Brianna Throssell is among the Aussie elite scheduled to race this weekend at the Western Australia State Championships.

Australian swimming superstar Grant Hackett capped off what must be described as a successful return to competitive swimming after a 6-year retirement with a 2nd-place finish in the 100 free on Sunday.

The 34-year old Miami Swimming Club trainee put in a 51.38 in the long course meters, timed-final event, to place behind only Chandler’s Ned McKendery (50.56) in the last session of the meet.

Hackett previously won the 400 free and was 2nd in the 200 free on the weekend.

The World Record holder and Olympic gold medalist announced late in 2014 saying at the time that he felt better than he had in a long, long time in the water, and stating his goal of taking a shot at the 2016 Olympic Team.

We can say that his comeback is a success.
Perhaps he can help to put again the Australian 4X200 free relay in order after several bad and even pathetic performances in the last few big international meets.

I agree Bobo, but the Aussies have some young guns that seem poised to put Australia back on the map.

to be honest, there’s really no limit to what the Aussie men’s 4X200 relay could do. McEvoy, Fraser-Holmes, Mckeon, and Horton could probably break the WR if they’re all “on” at the same time. Hackett can provide some leadership as the only remaining swimmer from the “golden age” of Australia swimming (2000-2001)

I agree. The quartet that you have just named, plus the usual “two guys you’ve never even heard of” could make up a very deep relay squad for Rio. I was very impressed with GH’s comeback swims this weekend, however he will find it hard to swim 1.47 point, only a couple of seconds off his PB(WR) at the age of 36. It’s an inspiring Masters swimming effort if nothing else.

I was surprised McEvoy was so far behind in the 400m. I know he is more a 100/200m swimmer, but would have expected him to be able to keep up with a 34 year old with only 6 months preparation. Maybe with the competition for 200m spots, he might need to think about focusing on the 50/100m free events instead? It will be a fast 4x200m relay team and they will need to earn their spots!