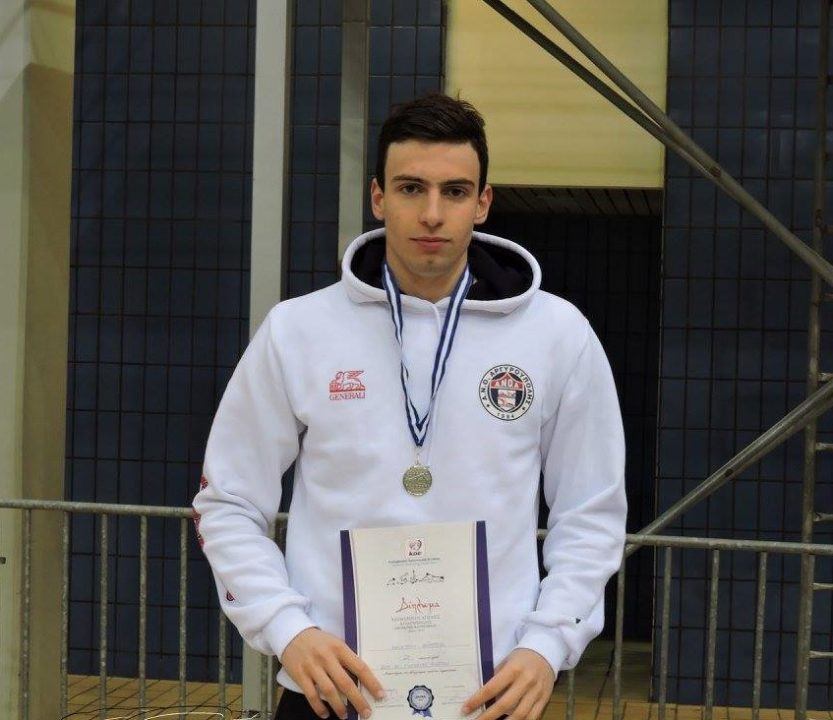 100 breaststroke and 500 freestyle NH DII State Champion Mason Pomroy has committed to swim for the University of Indianapolis beginning fall 2020.

Dimitrios Dimitriou of Athens, Greece, has given a verbal commitment to the University of North Carolina at Chapel Hill for the fall of 2017.

“I chose UNC because it is one of the most outstanding universities and it has one of the best swimming teams. I strongly believe that studying at UNC can help me develop myself academically and as an athlete. I can’t wait to join the team. Go Heels!!!!”

Dimitriou swims under coach Dimitris Athimaritis at the club team ANOA, in Argyroupoli, a suburb of Athens, Greece. He specializes in mid-distance freestyle. Dimitriou qualified in the 400m freestyle for the 2016 LEN European Aquatics Championships in London, and because he was only 0.37 seconds over the FINA Rio 2016 A cut in the event, he received an invitation from FINA to participate in the 2016 Rio Olympics.

His best LCM times are (with SCY conversions using our Speedo Time Converter):

UNC continues to go international….new game for them. Last year and this year best recruits are international. They used to have hardly any international swimmers. What’s changed?

NC State’s been taking a lot of talent internationally and turning it into success. Maybe UNC is trying to build off of this on their own.

Not many of us heard who these kids were before they got to NC State. UNC will start getting top talents once they start ‘developing’ swimmers like NC State does. I don’t think it’s so much about Rich’s personality.

Henry Campbell is arguably the fastest 500 free recruit coming out of high school at the ACC with 4:19. He should be destroying the ACC….. Instead he is behind Ipsen and Linker at the moment.

When you have a coaching staff 30 minutes down the road that can elevate your game and a head coach that used to swim there, it makes it hard for someone with DeSelm’s personality to succeed. It’s really hard to get fast swimmers to come to UNC for 2 reasons, first – they haven’t done anything since the late 90’s, and second – it’s a hard school to get into (unless you play football or basketball of course). Their female recruiting class this year looks fine, but the men’s class has been weak for a number of years – and they can’t get any quality swimmers to stay in state and swim with them. Makes no sense. Maybe their academic… Read more »

Well they can’t get swimmers when they don’t get results. When’s the last time the men even had a relay top 8 at ncaas? They haven’t won ACCs in 20 years. Bernadino gets canned, like 20 guys transfer, the door is wide open and NC state goes from last in ACC to most dominant.

Has nothing to do with academic standards. Can’t get top recruits without results. That being said, all these international recruits is new. Did academic standards change it is it just desperation? I mean their two best swimmers right now came in with one year of eligibility

Just curious on what the problem with DeSelm’s personality? Not critiquing, just wondering why UNC has fallen off so much.