Golden Glow: How Kaitlin Sandeno Achieved Gold in the Pool and in Life 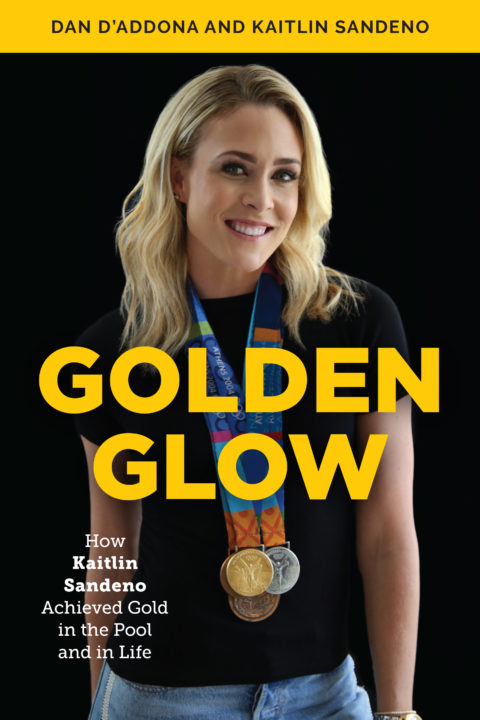 Excerpt from the book Golden Glow: How Kaitlin Sandeno Achieved Gold in the Pool and in Life  by Dan D’addona and Kaitlin Sandeno. Used by permission of the publisher Rowman & Littlefield. All rights reserved.

Golden Glow: How Kaitlin Sandeno Achieved Gold in the Pool and in Life recounts Sandeno’s amazing swimming career—including her spectacular Olympic performances—and details the impact she has made in the world outside the pool. Breaking into the Olympics at seventeen years old, she became the face of the team with her enthusiasm and bubbly personality. She returned to the Olympics four years later to have one of the most dominating meets by an American woman in history. But Sandeno’s legacy in the pool is nothing compared to how she has used her platform to help those around her. She is the national spokesperson for the Jessie Rees Foundation and spreads joy around the country to children fighting cancer. She has emceed Olympic trials, hosted multiple shows for USA Swimming, and has given back to her sport, as a coach of youth teams and now as general manager of the International Swimming League’s DC Trident. Golden Glow is not only the story of how hard work and perseverance led Sandeno to Olympic gold but also how she has used her success in the pool to inspire those around her.

Kaitlin was four years and thousands of miles from Sydney when she was intimidated by Klochkova. After all, what teenager wouldn’t be a little intimidated? Four years later, it was a different story. Sandeno was not intimidated, she was excited. But she was still facing the best in the world. This time, she didn’t seem as unbeatable, however.

“I had a joyful smile, not a nervous smile this time. I get up to the blocks and who am I next to? Yana Klochkova. Again. This is four years ago all over again,” Sandeno said. “But I knew not to swim her race. I took it out smooth and easy. I was third after the fly and got to the backstroke and I had really great underwaters, and most foreign swimmers did not have good underwaters at that time, and I kind of pulled myself up to second just with my underwater kickout. I had a really nice backstroke leg. Getting to the breaststroke, I was right behind Yana.”

Now, all of the work, all of the questions, and all of the dedication to breaststroke training, the moment of truth was here for Kaitlin. It was time to prove she had four elite strokes.

“I could see myself pulling up to Yana in the breaststroke,” Kaitlin said. “I felt strong, and I was getting more excited. Later, when I was swimming for Bob Bowman, I heard him describe an out-of-body-experience race. That is the one and only time I had ever felt like that. Not tired, no fatigue, just felt so good and so in control. We were basically tied when we touched for the freestyle.”

Just 100 meters to go, and the excitement was building. This wasn’t Yana pulling away, as she had done four years earlier. Kaitlin and Yana were locked in one of the most epic duels in swimming history. It was going to come down to who could finish better.

“The last turn, I came up before her, and the team was going crazy. We were literally stroke for stroke,” Kaitlin remembered. “I looked up when I touched and I saw ‘Sandeno, USA, 2.’ I was like okay, silver. Then I got this huge smile on my face. I remember looking at my block to make sure I was looking at the right lane. And it said 4:34.95, and I lost it. I could not believe it. I was jumping up and down and celebrating. People were looking at me like, ‘You didn’t win.’ But I couldn’t believe that happened: 4:34 was my gold medal.”

Jon Urbanchek saw something different in Sandeno that race. It was the start of a dominating Olympic Games. “She was on fire,” he said. “Her time for the last 100 freestyle was like a 1:01. In those days, that was almost unheard of. She just ran everybody down at the end. It was really close. If they had to go two more meters, she would have won. She had a lot of confidence. She is a racer. She loves to race. It doesn’t matter what it is. In training camp, we played some soccer, and she was playing with the boys and scoring on all of them. She is what we really needed in swimming, an athletic woman.”

Kaitlin and her coaches weren’t the only ones going crazy. Family, friends, and Team USA fans in the stands—and people watching throughout the world—were excited about the first U.S. medal of the Games.

“I remember looking up, and Diana and Ryan were just going nuts,” Kaitlin said. “I thought they were going to fall out of the bleachers. I was trying to find my parents in the sea of people.”

Her parents were overjoyed. “She was stuck on that time for so long. She was just so happy, and there was no pressure,” Tom Sandeno said. “That was so exciting.”

It immediately rubbed off on her teammates as they were preparing for the biggest swims of their careers. “Her time drop in the 400 IM was insane,” Natalie Coughlin said. “I am sure that everyone in the stands and teammates that weren’t racing that night, it pumped them up for the week. Swims like that get everyone fired up, and you want to build upon what Team USA is doing.”

It even fired up past swimming legends, who took pride in the way Kaitlin’s energy jump-started a memorable Olympics for Team USA.

“Kaitlin is one of those swimmers that you hope for on a national team. You want somebody with personality that shines through the moment they walk in. It is endless energy. It is a positive force the moment she smiles—which happens all the time,” Olympic gold medalist Summer Sanders said. “A lot of her teammates needed that. I love the fact that she had the guts to do the 400 IM, which is one of the most brutal events. Any time I see an American doing well and showing grit in that 400 IM, I am proud. It helps that she is a vivacious personality as well. Swimmers are in the water with cap and goggles on. You have those personalities, and you remember them. They are not just these robots that follow the black line at the bottom of the pool back and forth.”

Then it was time to face the reporters, one of the toughest things to do when a race doesn’t go well. But this was one of the easiest interviews of her career.

“You go through the media as soon as you exit the pool, and the first question I got was along the lines of, ‘You were this close to winning gold, how does that feel?’ That time was my gold,” Kaitlin commented. “Four years—and a crappy four years of swimming if we are being honest. That was my gold. And I am in no way upset to be receiving a silver medal around my neck.”

“That is her talk now, the idea that her silver was her gold,” Bree Deters said. “We were all so excited. The 400 IM, her time. She didn’t just break her best time, she blew it away. I remember hearing the commentators talk about her getting so close to gold and not winning. I was like, ‘Do they even know her at all?’ I was almost angry to hear everyone put that spin on it, that she only won silver. How many people ever get to compete at that level, let alone win a medal at the Olympics? Blowing her own expectations out of the water every step of the way in 2004. That was really cool to watch.”

Especially after receiving the versatile training Vic and Renee Riggs ensured each one of their swimmers mastered. “It is 100 percent from the training program we came from,” Deters said. “It was a distance-based program, but our coaches carried the versatility and endurance. We did a lot of yardage, but we always all trained IM. We were always doing IM sets and freestyle sets. We were encouraged—and forced, I suppose—to compete in everything. I was a terrible breaststroker, but at least once or twice a season I had to swim it in a meet. They made all of us do that. They wanted us to have the ability to race all of the events.”

Kaitlin proved she could do that, but with her time drop in the 400 IM, she had proven even more. “Well to go from 4:40, which she had done about 10 or 12 times—and she was so frustrated with it—to go 4:34 was just unreal,” Mark Schubert said. “It is unreal for a swimmer that caliber to drop that much at the Olympics Games. The thing that I remember the most is after the swim, I was waiting for her at the warm-up pool. She came out of the interview area and had the biggest smile I have ever seen. She was overjoyed. It was kind of ironic because she lost the race by like a 10th of a second. She was so proud of herself. I was so happy about that. Somebody without that same perspective wouldn’t have felt that way.”

But her teammates knew how important breaking 4:40 was to her. It was something that had taken a long time to break—a long time.

“She totally dominated,” Diana said. “With swimming, I swear when you start off a meet that good, you know you are just going to rock it for the rest of the meet. Your confidence level is so high, you are at the highest level possible, and you have so much support around you. As soon as she swam that race—and it wasn’t even about her getting the silver medal, it was about her conquering something that she had been trying to conquer timewise for so long—you just knew the light in her had an extra oomph in it. It took her really far. It was fun to experience it with her and see all of the amazing things that she had going forward for her. That was just the start. That is the first day. It totally jump-started the entire team.

“But being a distance swimmer, you can go years plateauing at a number that you just can’t shake. It is hilarious talking to younger kids these days who are stressing that they haven’t gotten a best time in months. Every distance swimmer has a plateau that was so solid that you never think you are going to break it. But when you do break it, you break it so hard that you have a moment like that. Her timing was impeccable. She just totally nailed it.”

It was a defining moment in Kaitlin’s career, but her week was just beginning. She had three more events on her schedule, including the 400 freestyle the following day. After talking to reporters, she had a lot to do that night and had to try to get some rest before another race.