‘Getting Help Makes You Strong’: Georgia’s Eva Merrell Opens Up About Mental Health 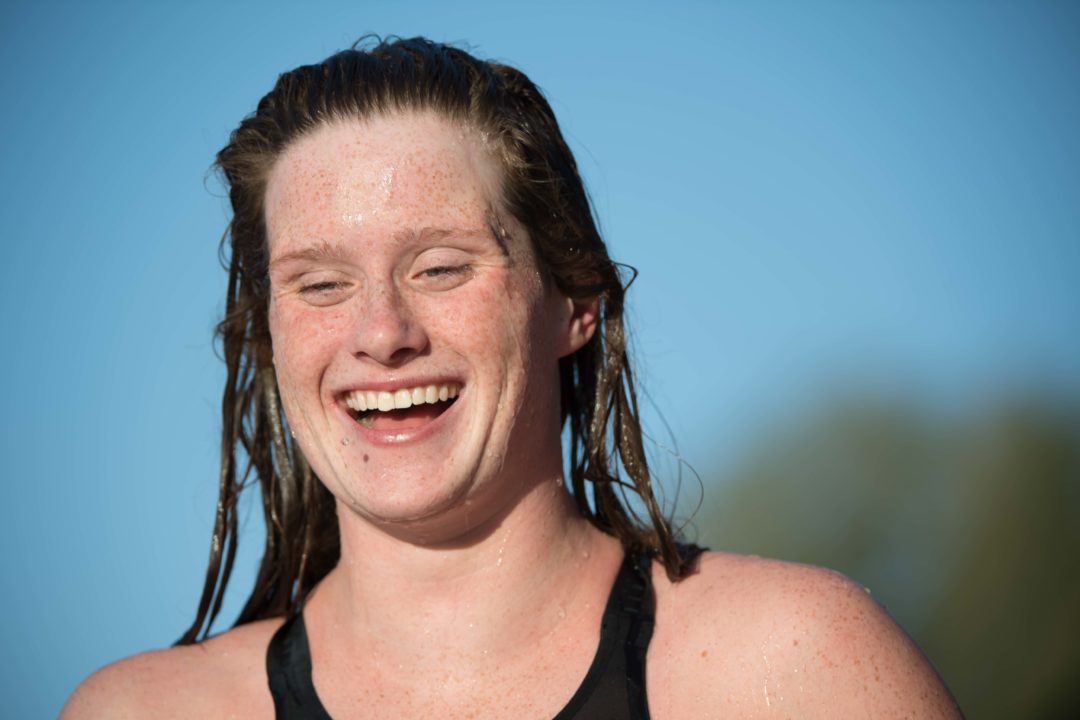 Merrell, taking a redshirt year to focus on her mental and physical health, wants to open up the discussion. Archive photo via Mike Lewis/Ola Vista Photography

As the college season got underway last September, one big name was notably absent from results: University of Georgia first-year Eva Merrell, SwimSwam’s No. 1 recruit out of the high school class of 2018.

In fact, the Newport Beach native hasn’t logged a race since August 2017, when she was diagnosed with mono while swimming at the U.S. Open Championships in New York. She also had an abnormally low heart rate.

“I was just super sick, wasn’t feeling well at all,” Merrell, 19, told SwimSwam. “And later that year, I was going to all these doctors trying to figure out what was wrong.” She was diagnosed with an eating disorder and hospitalized a couple weeks later for Bradycardia.

Bradycardia occurs in people with resting heart rates below 60 BPM – rates reasonably below that can also be a harmless sign of cardiovascular fitness, particularly in endurance athletes. But Merrell’s heart rate was at times as low as the 20s as a result of her eating disorder.

“A lot of doctors I saw praised me for that because they attributed it to my athletic condition when in reality it was my heart basically deteriorating, almost giving up on me,” Merrell said. After she was hospitalized to address that condition, she went to treatment for her disorder. “In a way it was a weight off my shoulders to know what was going on, because that meant I had a way to address it, and a way to get it treated.”

But she never wavered on moving to Athens in the fall of 2018. In fact, she used it as a source of inspiration throughout treatment.

“My main motivation to kind of figure out what was going on, and get to the root of what was going on, was going to school,” Merrell said. So she made to Georgia on time, and on an early-season women’s team retreat, listened to a program alum talk about her own struggle with mental health; it “inspired” Merrell to open up to her teammates, to an extent.

“In a way it was a weight off my shoulders to know what was going on, because that meant I had a way to address it, and a way to get it treated.”

“I actually have never told directly most of the men’s team – I think they know because we’re all very close, but it’s something I definitely struggle with talking about because there is such a negative stigma around eating disorders and mental health,” she said. “I had to kind of figure out who would understand and who would support me. But the whole team has done amazing.”

While competing was essentially out of the picture from day one, training did not go exactly as planned in the fall. Merrell was hospitalized for her heart condition again last December and went home to get treatment for her eating disorder from a team specializing in elite athletes at UC San Diego. Earlier this year, she officially took a redshirt season but hopes to get back to Georgia this spring.

But throughout the last year-and-a-half, Merrell has taken time to reflect on mental health in swimming and athletics as a whole, which brings us to today.

“I wanted to just open up about my story so it was a more talked-about subject because I think I felt a lot of shame and embarrassment surrounding it,” she said. “But I want to be able to have this topic be something that’s discussed and people can be educated and aware about.

Noting the impact of watching Michael Phelps and Allison Schmitt open up about their own mental health experiences, she sees a similar need for more frank conversation. This includes taking a closer look at the “pressure cooker” that is elite sport.

“There’s a lot of focus on physical health, but I think there needs to be more on mental health, because that’s just as important,” Merrell said, adding that she recently gained a better understanding of the biological aspect of disordered eating that could be out of her control.

“I think I had to really look towards my views on athletics, because my eating disorder was restrictive, and that kind of stemmed from me wanting to be the best athlete I could,” she said. “I kind of was like, ‘well, if certain athletes look like this, if certain athletes eat and perform like this, I have to do the same.’ So it was really redefining what my body needed and how well I perform as an athlete, just for myself and not compare it to anyone else.”

And part of the difficulty was that the restricted eating “paid off,” at first.

“I definitely remember a time where I was swimming very, very well and I was getting compliments on swimming, and how I looked – it was a very good time for me in the sport,” Merrell said.  “So I think that kind of reinforced the wrong things for me because I was like, ‘oh, well if it’s going well now, I can only imagine how well it will go in the future.’ But it’s definitely proven that that sweet spot does not last forever.”

“There’s a lot of focus on physical health, but I think there needs to be more on mental health, because that’s just as important.”

She’s also learned the “balance” of individuality: “What works for one person might not work for me and vise versa. I was young and naive when I was at a high level in the sport and didn’t understand enough about my body and its needs opposed to others.”

Sports can be an “amazing” way to build self-esteem, learn teamwork, and strive towards goals, Merrell added. But she also feels the individual nature of swimming can quickly expose the dark side as a breeding ground for anxiety and depression, among other things.

“I was afraid to show my weaknesses because I wanted to portray myself as this strong, resilient athlete. But I think just understanding that opening up can really save your life. And in doing that it can save other people’s lives,” she said, explaining she felt particularly alone in high school during her junior year ascent.

“I think part of it is just understanding that they’re not alone, and it’s nothing to be embarrassed about, and that getting help is really only something that makes you strong, and not weak,” she said. “It’s okay to have struggles and weaknesses because at the end of the day, persevering through those weaknesses is what’s gonna make you stronger as a person and an athlete.”

For the first six months or so after her diagnosis, Merrell only used her own family as support. But once she got to Georgia, she leaned more on her team and best friend Maddie Homovich.

“She was with me every single day first semester. So I still text her all the time, and she’s such an amazing friend,” Merrell said. “And it goes without saying Jack [Baurle] and Steph [Williams Moreno] and Brian [Smith] and Harvey [Humphries] – it’s amazing how I felt nothing but love and support from them, and that’s something I’m so grateful for.”

Despite being physically separate from the team and a sport that means so much to her, Merrell’s goals remain unchanged – the road to reach them is just more circuitous than expected.

“Even though I might not be at the place I thought I would be right now, I am still determined to forge my way through the sport and accomplish my goals.”

It takes a lot of courage to come forward with this information. She should be commended for her honesty. I wish her the best in the future and hope she returns to full health.

There are many athletes and coaches who suffer from severe mental issues. Society is generally not forgiving of some. As time goes by I sincerely hope it gets better for all.

Poor girl. the sport you have to watched your weight, so it caused her to developed an eating disorder to keep the pounds off. Its good that she understands more about her disorder.

So proud of you Eva!

Thank you for sharing. Wish you nothing but the best moving forward.