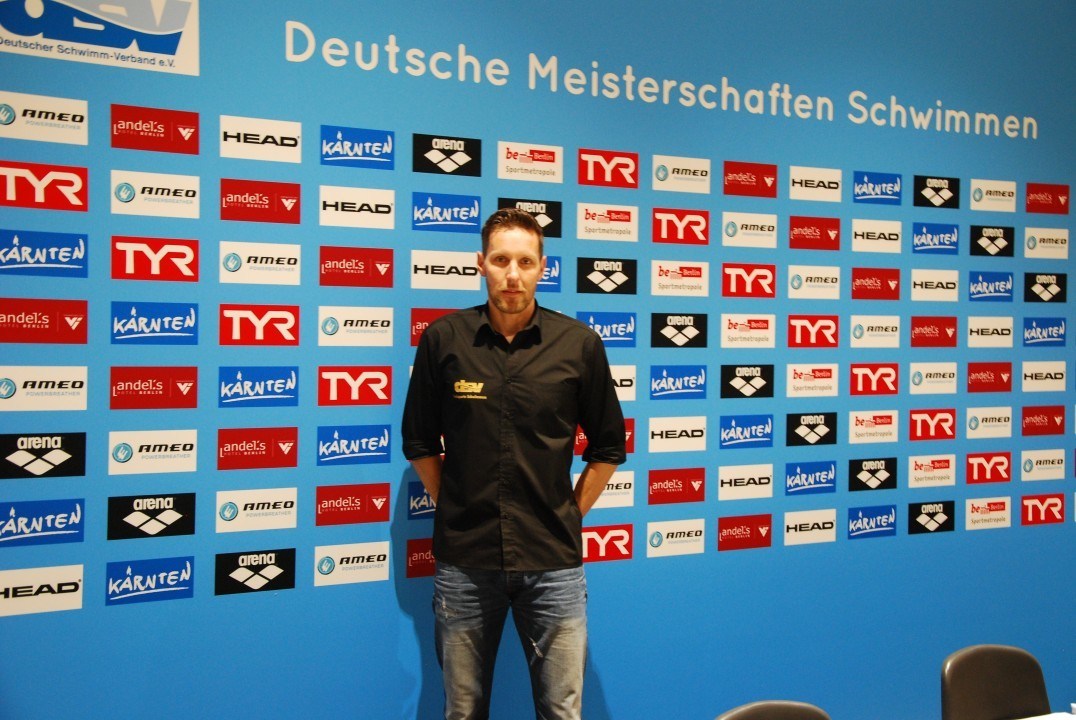 The Head Coach of the German National Team, Henning Lambertz, has determined that his women’s 4x100 freestyle relay will not be competing at Euros in London Archive photo via Daniela Kapser

The European Championships kicked off yesterday with synchronized swimmers already hitting the pool, while the competitive swimming portion is slated to begin on Sunday, May 22nd.

However, the Head Coach of the German National Team, Henning Lambertz, has determined that his women’s 4×100 freestyle relay will not be competing at Euros in London. Says Lambertz, “they have already had enough chances,” referring to the fact that several countries will be using the championship meet as a final opportunity to score Olympic-qualifying times and garner a lane in Rio.

German relay contenders competed both at last year’s FINA World Championships, as well as the recent German Nationals meet, and were unable to clock the qualifying time on either occasion. With the last relay-qualifying opportunity resting with the European Championships, Germany will be without 400m freestyle relay representation on the women’s side in Rio.

Lambertz fired off comments regarding the German relay squad members saying, “Compared with the world’s top (swimmers), our girls look like thin models, not athletes. “They couldn’t swim the times, they clearly lacked the power.”

“If they had given a good account of themselves in Berlin, we would have sent them, but they are not competitive.”

The German relay in Kazan last summer wound up 13th in a time of 3:41.56. More recently at the German Nationals in Berlin, the top 100m freestyle finishers of Annika Bruhn, Anna Dietterle, Helen Scholtissek and Pauline Schmiedel were 0 for 4 in terms of achieving the individual FINA qualification mark in the event. The FINA “A” cut sits at 54.43, while Bruhn notched 54.85, Dietterle clocked 55.06, Scholtissek finished 55.18 and Schmeidel earned 55.52.

I would remind Coach Lambertz that 40 years ago another German (East) relay placed 2nd in the 4×100 relay and they did not look like ‘models’. He walks a fine line with this decision and his comments. The two 19 year old sprinters would benefit from the experience and it seems he could benefit from the coaching experience. However, maybe he doesn’t have the confidence that he can help his swimmers improve. Bad decision.

Why does he walk a fine line? Lambertz has a very strict course laid out for the german national team. If they are not able to compete they should not be at the olympics. Concerning the two 19 year olds he has a longlist of athletes that still very well might get picked out for a start as they are specially young talents that need some experience.

He walks a fine line because if he is judging his athletes on appearance then the athletes can easily find a substance to give them “bulk”. Why should he care that he has fast women who are thin? His 4×100 free relay at Worlds was 13th and missed the automatic qualifier by not getting 12th. The splits on that relay were 55.34 (Bruhn), 54.99, 55.02, 56.21. Bruhn is the only returning swimmer in that top four and she has already been 54.8 so they are half a second faster. The other flat starts times listed above give them another second and with a well coached flying start maybe 1.5 seconds. Seems to me they could be under 3:40 and in… Read more »

Another aspect that goes to your comment “he has a longlist of athletes that still very well might get picked out for a start as they are specially young talents that need some experience” – he’s the national team coach not “der machthaber” (dctator) of the national team. Coach Lambertz should not try to be the gatekeeper to the national team but encourage ferocious competition to be on the team. He shouldn’t be “picking out” young talent. My understanding of current rules is that if he lets these four women go to London they haven’t made Rio unless they are in the top 4 times of the world outside of the 12 teams that made it at Kazan. If they… Read more »

Right decision. They are way too slow. Maybe he should not have talked about their bodies, but the perfomance of the girls were just too bad.