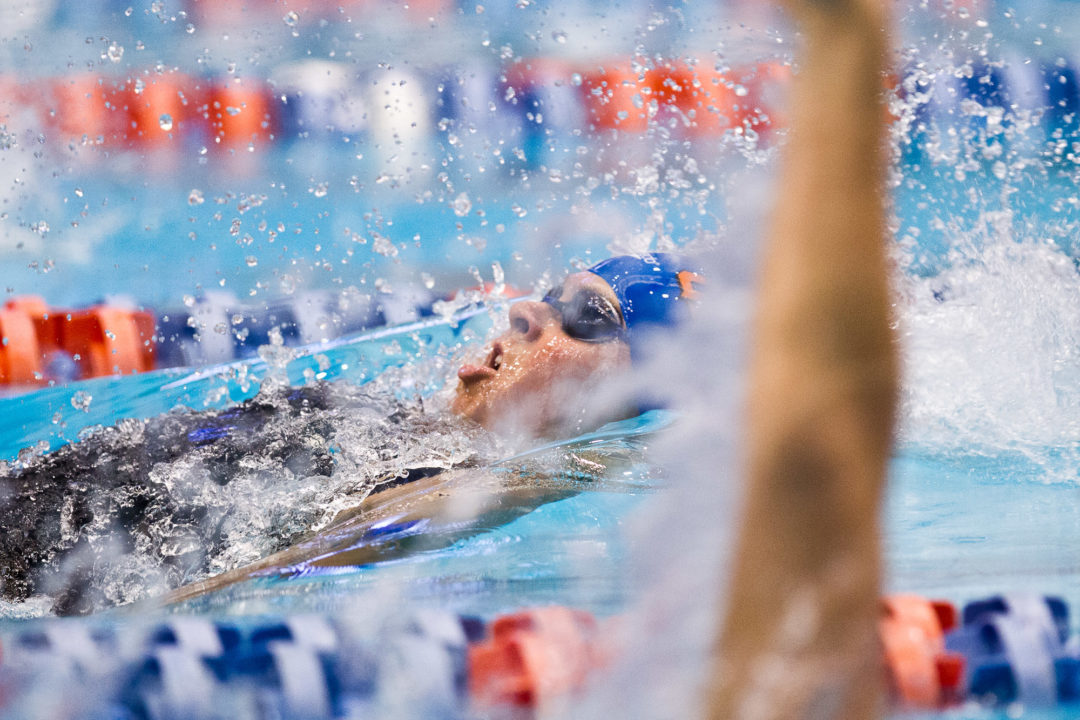 The Florida Gators women brought in a monstrous recruiting class this season, and that class is already showing off it's strength at the team's season-opening All-Florida Invite.

The Florida Gators women brought in a monstrous recruiting class this season, and that class is already showing off it’s strength at the team’s season-opening All-Florida Invite.

On the 2nd day of competition, several freshman won their individual events, led by Sinead Russel who took first in the 200 free and the 100 back. Natalie Hinds and Pawel Werner also captured event titles.

Florida started off the evening with another strong sprint relay, going 1:40.9 in the 200 medley. Russell’s opening 25.4 backstroke leg set up the relay nicely and Hinds’s 23.7 fly split sealed the deal. Florida’s B relay took second, but was almost four seconds behind.

Youth prevailed again in the 400 IM, with sophomore Rebecca Rainer winning that event with a B cut of 4:17.8. Florida Atlantic’s Eszter Bucz snuck into second place with a 4:20.6, another strong in-season swim.

When the women’s 100 fly rolled around, freshman Hinds proved her relay swim wasn’t a fluke, and won the event in 53.99, picking up a B cut in the process. She was nearly two full seconds ahead of the next fastest competitor, Miami’s Lucy Worrall.

After watching her classmate win an event so early in her collegiate career, freshman Russell did the same in the 200 free, going 1:49.19 to just edge out teammates Jamie Bohunicky (1:49.33) and Elizabeth Beisel (1:49.41).

Gator breaststroker Hilda Luthersdottir and Miami’s Sofia Johansson battled it out in the 100 breast, but Luthersdottir continued Florida’s winning streak, going 1:03.3 to touch out Johansson’s 1:03.5. Johansson had a big split on the 400 medley  relay last night (1:02 low), but couldn’t muster a sub-103 swim Saturday.

Florida’s two relays were first and second in the 800 free relay, going 7:22 and 7:28. The only swimmer of all 8 Gators under the 1:50 mark was freshman Lindsey McKnight on the leadoff of the B. FSU’s team went 7:32 to place third.

On the men’s side, Florida opened the night with the win in the 2medley relay. Their A team went 1:30.1, bookended by Christian Paul-Homer’s 22.8 backstroke opener and Brad DeBorde’s 19.6 on the freestyle anchor.

In his return after a redshirt season, Sebastien Rousseau made a statement in the 400 IM, winning and picking up a B cut with a time of 3:51.1. Eduardo Solaeche-Gomez and Connor Signorin, who went 3:53.3 and 3:53.7, respectively, also earned B cuts.

Marcin Cieslak, 2012 SEC Male Swimmer of the Year, proved he was worthy of his title when he took first in the 100 fly with a B cut time of 48.1. Cameron Martin, who finished almost exactly a second behind Cieslak, was second for the Gators.

Florida freshman Pawel Werner had a huge swim in the 200 free, winning in a time of 1:38.6. Carlos Omana and Cieslak were second and third, but Werner was the only swimmer in the field to break 1:40.

The Gator men saw another B cut swim in the 100 breast, with Matt Elliott going 55.3. His teammates, Ricky Munch and Solaeche-Gomez, went 56 and 57 to take second and third.

Homer led a 1-4 sweep in the 100 back, going 50.03. Connor Signorin, Sebastien Rousseau, and Cameron Martin were close behind–all going under 51.

Pretty impressive stuff as the team Twitters say they’re swimming practices before sessions and doing weights between prelims and finals.

Natalie Hinds is a beanpole, and if Matt Delancey can put some muscle on her like he has Dwyer, Lochte and Beisel, she is going to be NASTY GOOD in the years to come.

Florida looked good, but dont forget they are not in hard swimming training right now. This is evident by the middle and bottom of the roster guys that are going near best times.