Gage Kohner to Swim at ASU with Final Season of Eligibility 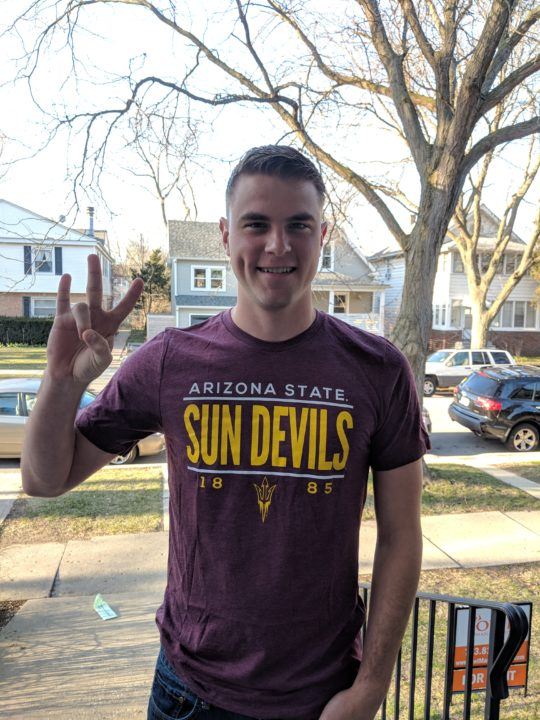 In the latest move to the Arizona State Sun Devils, Northwestern post-grad Gage Kohner has announced his decision to attend business...

In the latest move to the Arizona State Sun Devils, Northwestern post-grad Gage Kohner has announced his decision to attend business school at ASU — he will swim for one of the two years he’ll be in school there, as he has one year left of NCAA eligibility.

“I am excited to announce that I will be swimming for the Arizona State University Sun Devils next year. I have had a great 4 Years at Northwestern University, but it is time to move on to my next chapter. The excitement of the coaches and the commitment of the teammates drew me into the program. I am thankful for the opportunity to swim for such an incredible program at a world-class business school.”

While Kohner was on the NU team for all four undergrad seasons, he did not compete in his fourth year due to having back surgery for a herniated disk. He also did not compete at the 2017 Big Ten Championships as a junior due to a collapsed lung, so his lifetime bests are from his sophomore season.

In the seasons prior, Kohner was one of the Wildcats’ top sprinters, representing them on various relays at the Big Ten Championships. He is originally from Boca Raton, Florida.

“I was brought into the sport and mentored by Andy Coan, who was a legendary swimmer and unfortunately passed away this past year. I love the team environment in swimming, so I especially look forward to every relay opportunity.”

Kohner’s best-ever relay split in the 400 free relay, a 43.01, is a full second faster than his flat-start best.

This is just the latest in a string of transfers of late — check out a rundown of some of them below.