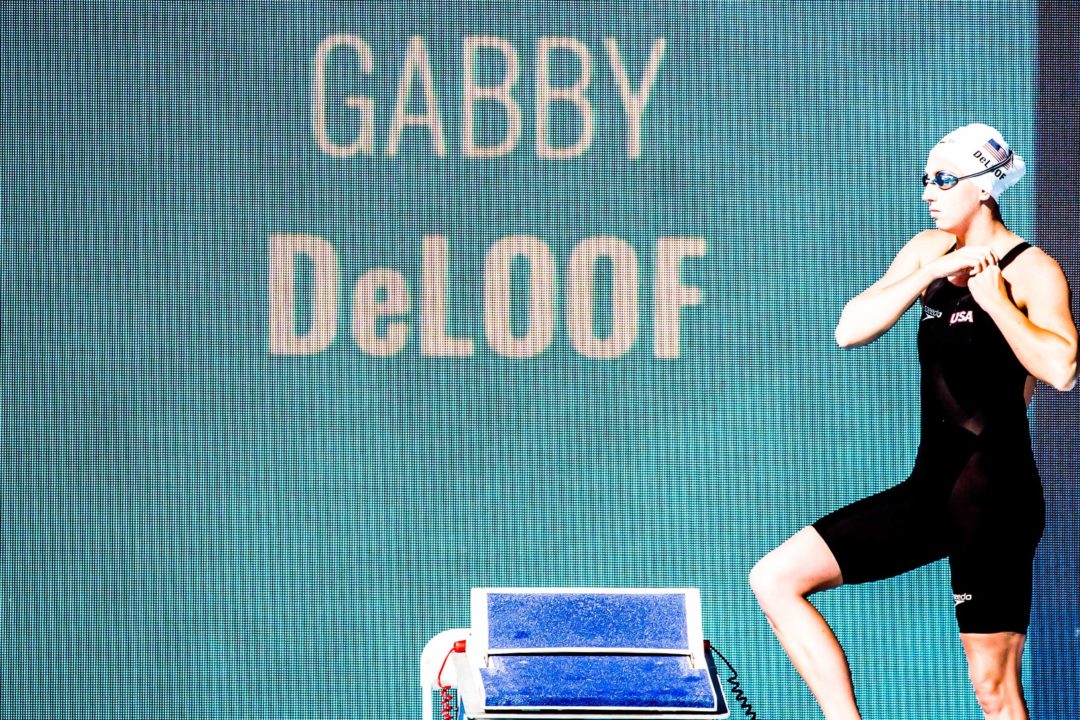 The club, headed by coach David Marsh, is also home to sisters Ali Deloof and Catie Deloof. Gabby Deloof has been training with Club Wolverine, the program based out of the University of Michigan, since she finished her NCAA career in the spring of 2018. All four Deloof sisters swam (or swim) at Michigan; the aforementioned three, as well as the youngest, Jackie Deloof, who is a current senior in Ann Arbor.

The three Deloof sisters who have graduated (Ali, Catie, and Gabby) were all announced as members of the New York Breakers in the newly minted International Swimming League (ISL). Ali joined Team Elite last fall, while Catie moved following her graduation from Michigan this spring. The three of them will now be training in San Diego while representing the Breakers in ISL competition.

Deloof’s move follows that of recent Stanford graduate and two-time Worlds roster member Abrahm Devine. The IMer confirmed his move to San Diego and Team Elite with SwimSwam in late August. The club boasts names such as Olympians Kathleen Baker, Lia Neal, Jacob Pebley, Ryosuke Irie, along with many other international and domestic standouts.

People do the silliest things

Yes, it’s strange how these swimmers don’t listen to the anonymous commenters on SwimSwam instead of an Olympic coach that has developed great swimmers for decades.

Anybody can sell cars.

Of all the swimmers he’s come in contact recently as of late, many (Lochte, Neal, Irie, Pebley, Stewart) have gotten worse. These comments exist for a reason

Even her own sister Ali has gone backwards since training there!

I’m sure that I share this opinion with many. Mr Bottom does not coach. Granted, he does have his favorites so he’ll stand and watch some sprinters. The DeLoof girls were wise to move on to a much sunnier place. No pro team in A2

Mel was faster than that!

Yeah. I have no idea what I’m talking about. You have your best year ever and less than 10 months out you switch to the program whose swimmers stunk up the pool this summer. As someone who has been in the sport for 40 years and swam on a few Olympic and national teams I’m just idiot swimswam commenter. Whatever.

If you have those credentials and want credit for it, put your name on it

what does it mean: “swimmers stunk up the pool this summer”
please educate us

Yeah, Marsh has such a poor track record of placing swimmers on the Olympic Team. Off the top of my head, he had Erivin, Lochte, Meili and Baker in 2016. Meili and Baker both won medals, and both were outside chances to win medals at best going into Rio. Baker wasn’t even the top qualifier for the U.S. from Trials and she won a medal. She finished what, 7th or 8th at Worlds in 2015? No one figured Meili for silver. She wasn’t even on the Worlds team in 2915. Ervin was like 100 years old and still won gold. Lochte won gold. Going back to 2012 — anyone favor Thoman to win a medal there? Silver. Cullen Jones? Silver.… Read more »

damn meili coming out of retirement in 2915

Well if she does, you better believe Marsh will be her coach.