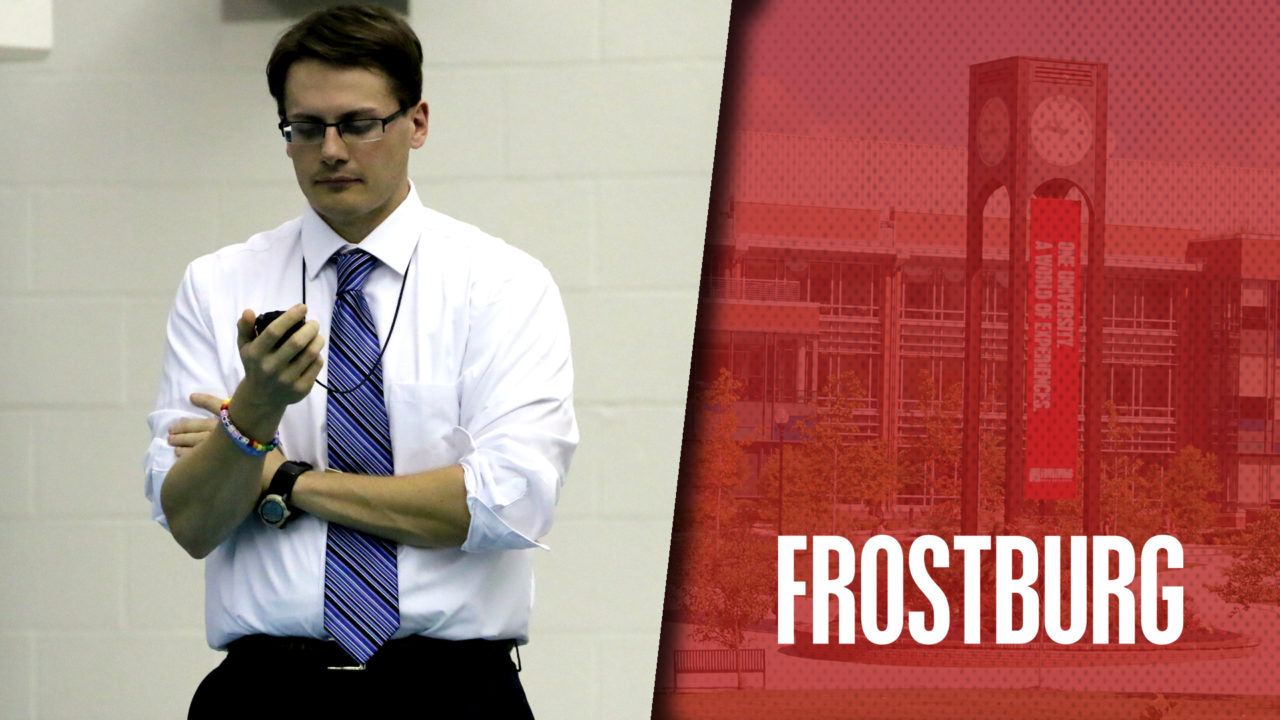 Bryan Christiansen has been hired from a national search as Frostburg’s next head swimming coach. This is his first collegiate head coaching job. Current photo via Frostburg Athletics

FROSTBURG, Md. – Frostburg Director of Athletics Troy A. Dell announced this morning that Bryan Christiansen has been hired from a national search as Frostburg’s next head swimming coach.

Christiansen is entering his first season as the head coach of the Frostburg State University swimming teams. This will be his first head coaching position at the collegiate level in his career.

Christiansen was named the assistant coach of John Carroll University’s swim teams in 2017, where he was part of the coaching staff that was named the Ohio Athletic Conference Women’s Staff of the Year for the 2018 season, while leading both the men’s and women’s to the 2018 OAC Championship.

“I first want to express my gratitude to Director of Athletics Troy Dell and the rest of the search committee for offering me the responsibility to lead the Frostburg swimming team,” said Christiansen. “I’m excited to become a part of the community here in Frostburg and begin working with an impressive and dedicated group of athletes. We have the opportunity to achieve some great things as a program over the next few years as we transition to Division II and I am honored to be at the helm.”

During his tenure with John Carroll, Christiansen coached 19 conference champions, and both Men’s and Women’s Divers of the Year. JCU also set seven OAC records, 13 varsity records and had two NCAA All-Americans.

Prior to his tenure with JCU, Christiansen served as an assistant coach at SUNY New Paltz from 2015-2017. He was part of a coaching staff that led their teams to second place finishes in the 2016 and 2017 SUNY Athletic Conference, coached eight conference champions while setting three SUNYAC records, 14 varsity records and 13 pool records. The SUNY New Paltz swimming teams both went undefeated in the 2016-2017 season.

Christiansen has coached swimming since 2008 at the club and high school levels and still active with summer swim camps, also directing the New Paltz Elite Camp from 2016-17.

Christiansen graduated from Hiram College, earning his bachelor’s degree in history in 2008 with a 3.82 GPA. He was a three-year captain of the men’s swim team and was named the MVP in the 2006-2007 season. He was part of the 800-meter freestyle relay team that finished with a time of 7:06.60 in 2008, still a Hiram College record to this day.

He earned his master’s degree in communication and media technology from the Rochester Institute of Technology.

Good luck to you! Glad to see Frostburg get some attention on SwimSwam!