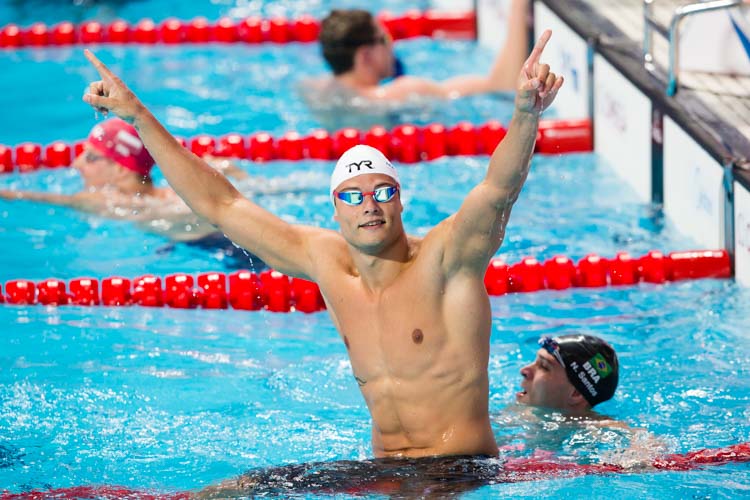 France's Florent Manaudou is one of the few swimmers with times that meet the Federation's new standards for qualification to Rio. Archive photo via Tim Binning/TheSwimPictures.com

On Thursday the French Federation (FFN) released the criteria by which it plans to select a team to represent the Tricolor at the 2016 Olympic Games in Rio. And they weren’t playing around.

Apparently following the “Build it and they will come” philosophy, the FFN tightened their standards on every single event, and by a considerable amount. In 2012 the Federation had a multi-tiered approach, in which swimmers had to perform to minimum standards in heats, in semi-finals, and then in finals at their qualifying meet, the Elite Nationals at Dunkerque in March of 2012. However, in the end, the swims required in finals were exactly FINA’s “A” standards for London.

Four years later, the FFN has taken a very different approach. While the selection criteria are less complicated, the standards are much, much faster: the French men’s times are around 2% faster than FINA’s “A” standards for Rio, while the women’s times are 2-3% faster. The swimmers must achieve these times in finals at the Elite National Championships in Montpellier (March 29-April 3, 2016).

It is interesting to note that, with only a few exceptions (men’s 100 and 200 breast, and 200 fly), the FFN has set the bar at a level that would have made finals in London. In the spreadsheet below, column J indicates the 8th place time out of semi-finals in London; in other words, the time it took to make finals. Column K compares the French 2016 Rio standard to the London final cut-off.

One can’t help but wonder if this is the FFN’s wish list. There was a lot of discussion in France this summer after Kazan, where the French women’s team didn’t live up to expectations. After an outstanding collective performance at their selection meet, the Elite Nationals in Limoges last April, “les Bleues” fell flat in Kazan. In a post-Kazan interview with Agence France-Presse, Fabrice Pellerin, the national women’s team director, expressed frustration that while the French women swam well in heats and semis, they were not at the same level as their international counterparts when it came time to making the finals. He suggested setting qualifying standards at a level that corresponds to a potential medalist. “If (next time) we take 8 or 10 swimmers, half men, half women, who have met a more restrictive criteria, these will be 10 swimmers who could potentially medal. It’s a philosophy, but it’s not up to me to put it into practice.”

A month later, it looks as though the FFN has adopted this philosophy. They have given themselves a back door, however. As a second step, the National Technical Director (DTN) has the right to add up to 6 men and 6 women to the team, as long as they make the FINA “A” standard in Montpellier.

In some events the margin of error is so small, it would be a mistake to leave an athlete at home.

Hypothetically, yes. In actuality, far less often than you think.

Much will depend on the approach the national federation takes with selection. Nations like USA & AUS play the “one shot saloon” method of 1st or 2nd at Trials and make the QT whereas others, where the depth may be lower, also take into account times that better the relevant qualification mark during the “qualification period” (either FINA’s or whatever the national body stipulates).

This is stupid. Just because a swimmer doesn’t have a chance to medal doesn’t mean they shouldn’t go. If every nation took that approach we would have like eight swimmers in each event at the Olympics. It should be fast AND deep.

Even if only the faster countries start implementing standards like this, there will end up being huge time disparities between eighth and sixteenth which won’t make for very exciting semifinals. Plus, you never know who might come out of the woodwork at the Olympics after a rather normal qualifying meet (a perfect example here would be Agnel).

Not to mention you might end up shooting yourself in the foot with this. Swimmers are already having to pull a… Read more »

The “just solution”, as with most things, lies somewhere in between but actually finding that right balance is extremely problematic. The FINA A marks for Rio ARE, in most cases, fairly ‘soft’ for the stronger nations.

I actually support FRA with this because they have a record of NOT trying to take a “full team” and don’t mind having events with no representative if they have nobody that is anywhere near competitive. Swimmers, in essence, know this and do not “labour under any misapprehension”.

With AUS, perhaps this is their way of trying to pick a much “leaner” team than they have. Will it fully eradicate the “serial tourists” ? Maybe not completely, perhaps the head coach needs to be… Read more »

and the talented athletes from these nations who miss these ‘standards’ should stay home and watch some swimmer go 1:05 100 free from some African or Island nation?! Does that seem fair or right?

IF they didn’t swim the time required then, its generally but not always tough luck. They ARE made fully aware of the selection criteria for making the team.

There CAN be “reprieves”. Most nations don’t have their final teams “ratified” by their national Olympic federations until close to final nominations date (early July).

IF a swimmer missed out due to illness at the time of Trials BUT have a met the standard at some other time during the FINA period (and no one else from their country has made the time), then they MAY be selected.

Furthermore, many teams will often keep an eye on the relevant world rankings and whether their swimmers who may’ve missed a… Read more »

TBH; I can see one event where there will almost certainly NOT be a qualifier (M200BRS). The marks look very “challenging” in M50FS, M100BRS, both MFLY, M200IM, both WBRS & both… Read more »

I don’t think having hard time standards=better performance at the Olympics. I believe that if you are the top 2 in your country an make the FINA standards, then send them. In some respects it isn’t all about winning medals or winning Gold medals. It is the process and the taking part that is also important. Only 3 people in each event will win medals so the rest of the world SUCKS and shouldn’t compete….that is foolish!

I agree with you Bobo!

This is the best approach which will produce very fast swimmers. France men 4×100 free will be very fast and will crush the competition in Rio…CRUSH!

I gave the news 2 or 3 days ago on swimswam and I agree 100% with that approach.
We did the same after the disastrous 1996 and 2000 olympic games.
In 2001 very tough qualifying times were required to go to Fukuoka and we only sent 6 or 7 swimmers if I remember well. It was a great eye-opener for everyone. The coaches and the athletes have all raised the bar then and French swimming overall has much improved.
They should have done that since 2013 to wake up our girls. Maybe it’s too late for 2016 but it will be at least a good wake-up call for some swimmers. I hope they keep these tough standards… Read more »

Excessively tough on both sides. 24.57 for the women’s 50?!? That’s under their national record!

We are doing fine with our system in the US. It is what encourages such a large base compared to other nations.

large base, you have bit more people living there most nations? It has nothing do with your system

Well, we aren’t being the old usa in some events, and while im all for young talent, thirteen year olds who have no chance at the trails shouldn’t qualifying, I think the times for Nationals should be low for everyone who can qualifying, but the trails is it’s own Olympics and they need to enf