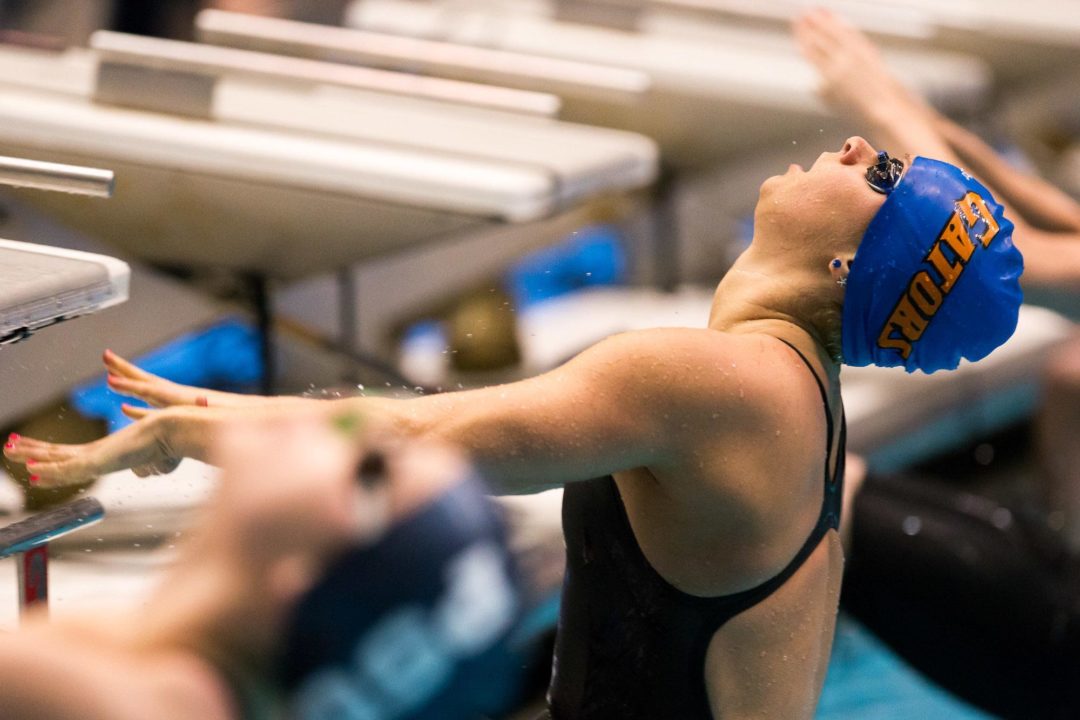 Elizabeth Beisel got back to basics, winning the 100 back, 200 back, and 200 IM against Alabama. Archive photo via Tim Binning/TheSwimPictures.com

It’s not quite the same illustrious matchup as in football, but the battle between Florida and Alabama in the swamp on Thursday night kicked off the Gators’ homecoming weekend with a pair of victories.

In the men’s meet, the final score was 169-123 in favor of Florida, and in the women’s meet it was 179-113 for the UF women, and that was with both Gator teams putting up several events of exhibition swims toward the end of the meet.

The Gator women switched up their lineup from earlier meets this season, which means some moved into primary events, and others moved out. For the most part, though, even those outside of primaries were still in secondary events, rather than a pure scramble of the lineup.

For senior Elizabeth Beisel, that meant no distance freestyles, though that didn’t stop her from picking up a lot of wins.

In her other swim of the night, she led off the Gators’ “B” 400 medley relay with a 55.12 split as they finished second, but it was sophomore Sinead Russell who really impressed with a 54.30 leadoff in the A.

Russell’s fellow sophomore Natalie Hinds started off her meet very well, splitting a 48.93 at the end of the medley relay, though this was a bit of an up-and-down affair for her. She won the 50 free in 23.07, an average time as she ran-away against limited competition, and bounced back with a much better win in the 100 fly of 54.29. That’s only three-tenths shy of her season-best, and in the race she beat Alabama All-American Kristel Vourna, who took 2nd in 54.85.

The Alabama women’s lone win on the day was in the women’s 200 fly. In that race, Australian freshman Leah Bird won in 2:01.81 ahead of Florida junior Jordan Smith in 2:01.97. Bird went out very hard through 150 yards, and though Smith was much better on the last 50, the wall came too soon for a comeback.

Florida’s Hilda Luthersdottir swept the breaststrokes. The 100 time was a 1:02.23, pipping Alabama junior Kaylin Burchell by just .01 seconds. The 200 wasn’t nearly as close, as Luthersdottir’s 2:15.30 was almost three full seconds clear of the field.

Freshman Danielle Valley won the 500 free in 4:49.25. That’s the best time of her young college career, pushes her into the top 15 in the country, and ranks her as the 3rd-fastest freshman nationally, behind only Missy Franklin and Rachel Zilinskas.

Alabama’s top freshman Bonnie MacDonald was the Crimson Tide’s top finisher in that race with a 4:55.87; officially, that will go down as a second-place finish, but ignoring scratches would have put her 4th.

In the men’s meet, Arthur Frayler was really impressive for the second-straight weekend. He was a 9:04.69 to win the men’s 1000 on Thursday, which was just about two-tenths shy of his season-best from the Georgia meet. He ranks 3rd in the country this year in the 1000; his only other event in the meet was, oddly, the 200 backstroke, where he finished 10th.

The Florida medleys continue to look nearly unbeatable, especially as junior Eduardo Solaeche-Gomez continues to flourish into more of a sprint breaststroke role. He split 54.29, and combined with Bradley deBorde’s 43.91 anchor, led the Gators to a 3:13.39 win in the 400 medley relay. That’s only a tenth-of-a-second shy of their nation-leader this season, as they hold the top two (and three of the top four) times in the country so far this year.

Florida’s Corey Main only swam his specialty, the backstroke, once, in leading off that Florida medley in 47.79, but into his sophomore year, the Gators will be counting on him more this year for his freestyle abilities as well. He won the 200 in 1:37.71 ahead of freshman teammate Mitch D’Arrigo (1:38.88). He then split a 44.8 leadoff leg on the winning 400 free relay.

In the backstroke events that Main left vacated, one win went to Florida junior Christian-Paul Homer, who’s having a great year, in the 100 with a 48.27; the other went to senior teammate Connor Signorin in the 200 in 1:47.72.

Most of the Florida men swam truncated schedules. Sebastien Rousseau was only in one individual race, but it was a good one as he went 1:45.71 in the 200 yard fly. That’s easily his best time this season by a second-and-a-half.

In the sprint butterfly event, Brett Walsh from Alabama gave the Crimson Tide their second win of the day, touching in 49.13. Florida’s deBorde took 2nd in 49.63. That was a season-best for Walsh, and was a good win as the Crimson Tide were without Vlad Caciuc, their top 100 man this year, on Thursday.

Is that split by Alabama freshman Anton McKee on the 400 medley relay for real? 52.2 for his breaststroke leg and out in 23.0? He only went 55.0 in the individual.

Guessing not. Look at the backstroke splits – 24.0/52.5 doesn’t really make sense either.