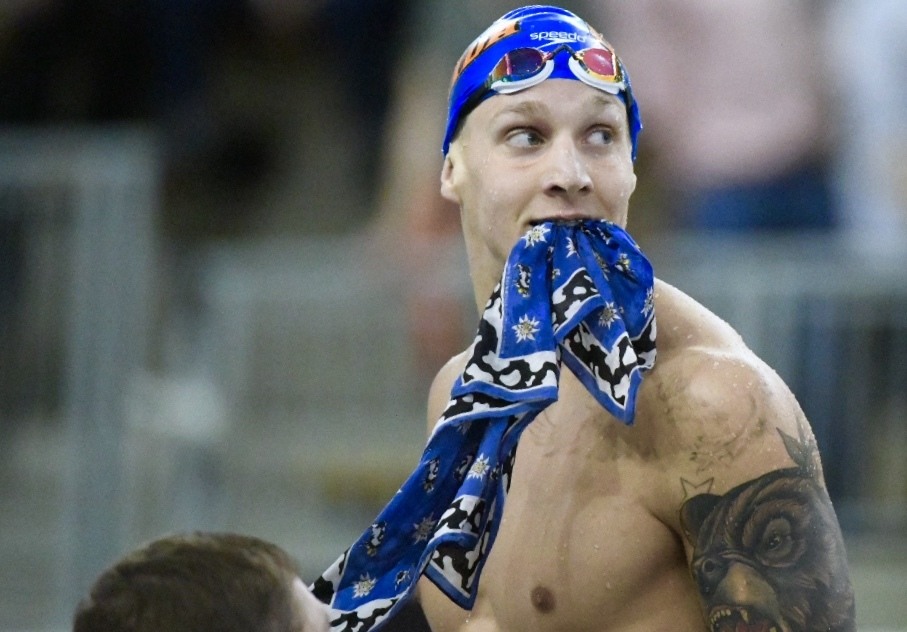 Caeleb Dressel won 3 of the Gators' 5 event titles in 2018, and was involved in a 4th as a relay leadoff leg. Archive photo via Mike Lewis/Ola Vista Photography

In 2017, when the Texas men won their 3rd-straight NCAA title of what has now become 4, they won 7 individual event titles out of 13 available for swimming and 4 relays to boot. Those 11 titles tied them with the 2001 Longhorns for the most event wins in a single NCAA men’s championship. The 2018 title, however, was a very different one. In addition to coming down to the wire between Texas, Cal, and Indiana, with the title not decided until the final session of the meet, Texas only won 3 event titles (they graduated 6 of their 7 individual event title-winners after last season).

Three teams won more titles in 2018 than Texas did – Florida won 5 (Jan Switkowski took the 200 IM in addition to Caeleb Dressel‘s 3 individual wins and the 200 free relay); as did NC State – 2 relays, plus Anton Ipsen‘s mile, Andreas Vazaios’ 200 fly, and Coleman Stewart’s 100 back.

Indiana also out-won Texas, taking 4 titles: Ian Finnerty swept the breaststrokes, including becoming the first person under 50 seconds on a flat-start 100 yard breaststroke; while on day 2 of the meet, Michael Hixon won the 1-meter diving event and they won the 400 medley relay.

But Texas’ 3 event titles were more-than-enough for their record-breaking 14th NCAA team title, putting space between them and Michigan, who have 12 official NCAA-recognized team titles (plus another 7 unofficial titles from the pre-team-title era).

The men’s all-time rankings didn’t change much. Florida’s 5 titles pulled them past Arizona into the top 10 all-time, while NC State jumped 6 spots thanks to 5 new titles (they had 9 coming into the meet.

The table below shows the updated all-time rankings. We did the women’s rankings earlier, but a wrinkle in the men’s rankings is that, because of how long men’s NCAA swimming has been around and because of more recent cuts to programs, there are several schools on this list that either have no varsity men’s program, or are no longer Division I programs.

They didn’t mention the 2 fly

There should be 2 more than that I believe. Coleman Stewart in the 100 Back and Andreas Vazios in the 200 fly

They did have 5 but it was 2 relays and 2 individuals. Andreas’s win is the 5th.

Scrolling through this list, I was startled by some ghosts. RIP UCLA, Miami, SMU, Rutgers, Washington… 🙁