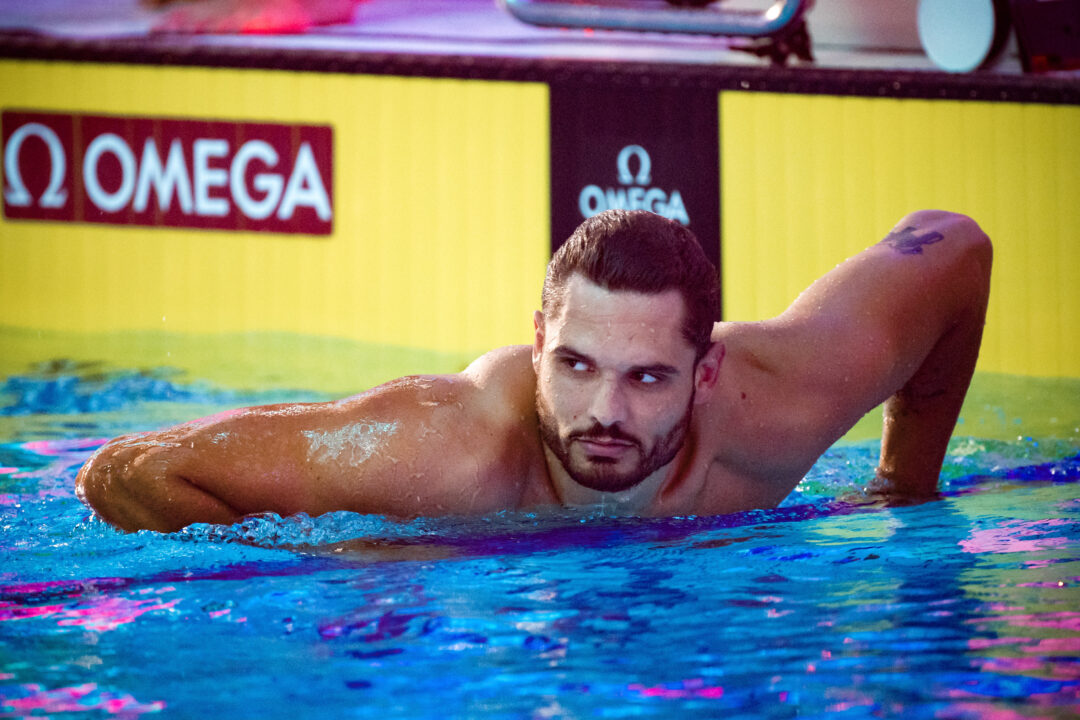 Four-time Olympic medalist Florent Manaudou has two new coaches as he heads toward the potential glory, and riches, of a home Olympic Games in 2024. Archive photo via Giorgio Scala / Deepbluemedia / Insidefoto

Frenchman Florent Manaudou has changed his training ahead of the Paris 2024 Olympic Games, according to French swimming booster and SwimSwam contributor Laurent Lahontan.

Of his former coach Julien Jacquier, Manaudou said “Julien is the coach who made the best programs for me. I told him that personally we don’t really have chemistry. I thanked him, he helped me tremendously. But I really need to be close to my coach.”

In Antibes, he will train under the dual coaching of Quentin Coton and Yoris Grandjean.

“What I liked was that the two are people who are going to have ideas, who are young. They will listen. We’ll (have an exchange). The fact that they’re friends is the only challenge. Because working with friends is good, but I don’t want to be let to do whatever I want. I told them that.”

Both Coton and Grandjean are former international-level swimmers. Coton, who is the same age as Manaudou (30), was the French Champion in the 400 IM in 2012 and 2014 and in the 200 breaststroke in 2017. Grandjean, a Belgian, is 32. He won 2 gold and 1 silver medal at the inaugural 2006 FINA World Youth Championships as a sprinter, and later won a pair of European SC Championships bronze medal on Belgian 200 free relays.

CN Antibes is home to two 50 meter outdoor pools, an indoor 25 meter pool, and an indoor teaching pool. The club, which has existed since 1965, has been voted the best training club in France on several occasions and has won more than 200 French Championships. It’s the only club since 1976 to have put a swimmer on each French Olympic Team.

That includes among its long history World Record holder Alain Bernard, now retired. Among the club’s current trainees is Tokyo Olympian Fantine Lesaffre, a 400 IMer who is the French Record holder in the 400 IM in long course, as well as the 200 and 400 IMs in short course.

The training group at Antibes won’t be as good as Manaudou is leaving behind in Marseille. The club’s highest-ranked males in the 50 free, Manaudous’s best event, last season were 17-year old Matteo Robba (23.39 – 44th) and 28-year old Julien-Pierre Goyetche (23.52 – 48th).

The move across the Mediterranean coast, about 2 hours east, also moves him further away from the restaurant La Piscine that he opened in Marseille with Georgiana Viou in 2016.

The 30-year old Manaudou won the Olympic gold medal in the 50 free at the 2012 Olympics and the Olympic silver medal in both the 50 free and the 400 free relay at the 2016 Olympics. After a hiatus to pursue a career as a professional handball player, Manaudou returned to swimming, where he trained with and competed for Energy Standard Club. He became a force in the new International Swimming League after his return, and repeated his silver medal performance in Tokyo over the summer.

Manaudou recently got engaged to Danish swimmer Pernille Blume, who was the 2016 Olympic gold medalist in the 50 free. While she has not made any announcement, if she continues training toward Paris as well, it is likely that she will train with Antibes as well.

While Blume has not raced since the Olympic Games (she is currently one of the leading contenders to win the Danish version of Dancing With the Stars), Manaudou raced in the last two regular-season meets of the ISL season for Energy Standard. In the last of those meets, in late September, he finished 4th in the 50 free (21.26) and 6th in the 50 fly (22.99) in short course meters.

kind of confused by Manadou’s statement: “Julien is the coach who made the best programs for me. I told him that personally we don’t really have chemistry.”

how does he make the best programs for you without having chemistry?

Phelps and Bowman clashed forever, yet Bowman wrote the best programs for him. You don’t have to love the doctor’s prescription for it to be good for you.

Btw, the move from Marseilles to Antibes is east, not west.

Maybe he took the scenic route.

He will go a PB in Paris. Old man strength

Nah, he won’t.
Maxime Grousset will beat him at french nationals and Dressel (mister 17.6 no fins) will make everyone look pedestrian at the end.

Oops. Sorry. Though you were talking about the 100. My bad.

what does flo doing a pb have to do with dressel. not to mention there’s 2 spots per nation and you only included grousset, theoretically leaving room for flo. so your reply doesn’t actually refute the point

what does manaudou doing a pb have to do with dressel. not to mention there’s 2 spots per nation and you only included maxime, theoretically leaving room for manaudou. so your reply doesn’t actually refute the point

Anyone who has to pull a SCY card to bolster an Olympic event argument has already lost the argument.

dude… what does dressel have to do with manaudou like… please

Dressel is more talented than him.

Any article with even a passing reference to Kyle Chalmers, Milak, Emma McKeon, or anyone that can possibly be linked to Dressel in any is full of “Dressel is sahhhhh much better than them”. It’s the worst.

Dressel worshippers are the equivalent to Lebron stans in basketball

When Dressel wins a World Championship in sprints of 3 different strokes, wake me up.

This article doesn’t mention Dressel, or the 50 WR. As an American, could we atleast try to not make this about us on every article?

It’s not about where Remel is from, it’s an opinion about Dressel ( the person) breaking the WR. If he was from Tanzania, I will say the same.

Caeleb is the second most genetically gifted sprinter that has ever existed. (after Usain Bolt of course).

Thats a bold assertion; there are many other track athletes with incredible explosivity and there are absolutely other candidates filtered into major league sports around the world. Dressel and Bolt are just very well adapted to their specific events.

Dressel is the best sprinter of all time. Live with it.

Btw, Summer Mcintosh will win at Paris and Titmus will go 3:55 next year.

Your Ledecky is cooked.

Dressel doesnt need to be brought up in every article. Live with it.

Best sprinter of all time who doesn’t have a WR in sprinting LCM or in SCM above the 50.

He is the world record holder in the 100 fly LCM and SCM.

Do your research miss Longhorn 🤡🤡

Dear Swimfan, you made me break my silence just to let you know you’re full of crp

He has a start. He gets consistently run down in the actual swim by Chalmers in the free, and now he’s getting run down by Milak in the fly. They both closed on him like he was standing still. 5 meters more in either event and he would’ve lost. Even in the 50 free, he didn’t pull away from Flo or Fratus after the start. Bolt was just the opposite: pedestrian start, but could actually run way faster than the others.

can’t for the 100 free battle between dressel, chalmers, popovici