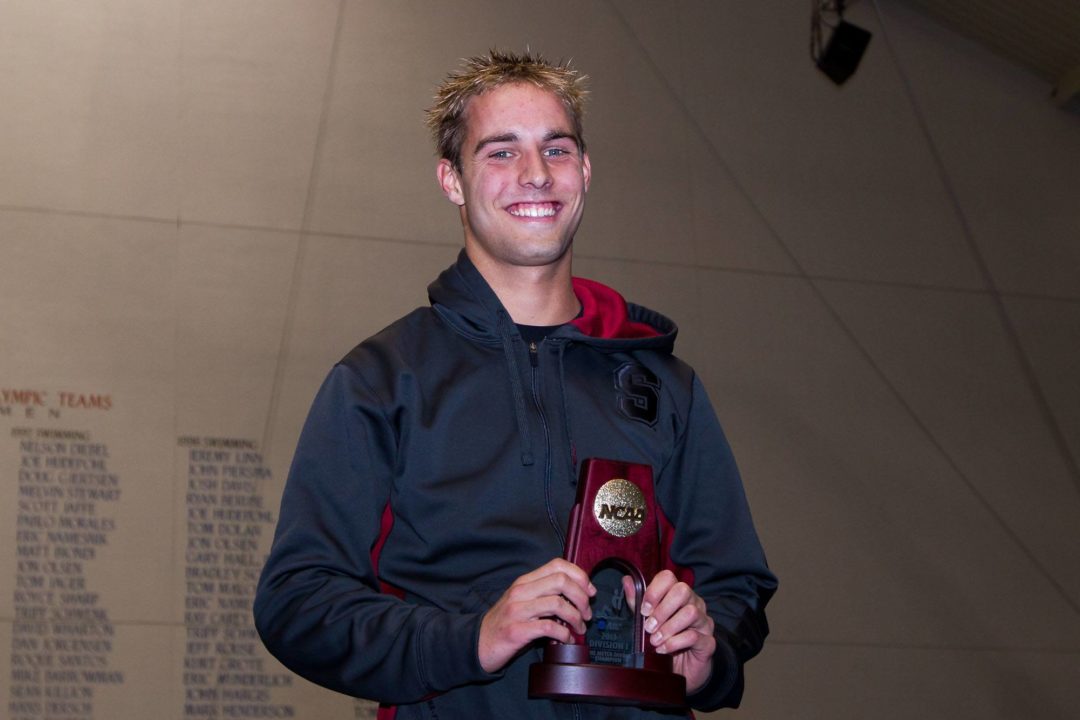 Kristian Ipsen is two-for-two in diving events so far. Is success on platform enough to pull Stanford back into the top 5? That and more questions answered by Price V. Fishback. (Photo: Tim Binning/TheSwimPictures.com)

University of Arizona economist Price V. Fishback just-so-happens to have a passion for swimming. In fact, he himself is a former college swimmer, and was the “Sam Kendicks” of the 1990’s, travelling all over the world calling swim meets.

The last two weeks, he’s been doing a great job of making some by-the-numbers predictions throughout both the men’s and women’s NCAA Championship meets. Check out below as he runs through the meet as it sits now, and some scenarios for the meet’s final outcome.

The predictions below are ranked by the predicted final score on Saturday night.  It is composed of the score at the end of Friday’s session (including diving) plus the psych sheet predictions for Saturday (no diving).

The Final finish at the top if everybody swims to seed tomorrow with no diving points will be:

Neither team has divers, so it will all come down to the swimming.

The battle for third and fourth is a tight one.  If they swim to seed tomorrow the next grouping will end up:

Stanford would have gained even more but lost both its medley relays, which likely would have been in the top 8.

Among this group, diving is as follows:

Arizona has a platform diver, Rafael Quintero, who was second on the platform at Zone E.

Texas has Will Chandler who has second at his zone meet.

While watching basketball and yearning for swimming, I got the crazed idea to start predicting how individual swimmers might move up.  The following is based on how swimmers have been swimming and moving up in earlier events and being optimistic that the teams don’t lose points on their top ranked swimmers.

Give Texas 18 extra points for Surhoff and Darmody in the 200 back,  6 extra  for Youngquist in the 100 free,  12 points for Chandler in the diving, and 4 extra points in the relay.   This totals an extra 40 points.

Give Florida an extra 10.

Give Southern Cal 5 extra points for Quintero in the mile, 9 points for Colupaev in the 100 free, 5 points for Klarskov in 200 Breast.  This sums to 19 points.

Auburn does not seem to have much upward movement, so I will not add anything.

This leads to the following bold statements among this group:

Indiana and Georgia seem to be pretty settled in at 9th and 10th.

There is a pretty tight battle from 11th through 15th between

The Psych sheet doesn’t even have Cal in the top 16 for the 400 Free relay… did you take that into account? I don’t see them being lower than 5th. That is major points… this is going to be a very close meet coming down to the last relay.

I really don’t see it being particularly close. Say Cal is 5th in that relay and Michigan is 2nd or 3rd. That’s still a pickup for Michigan. And Michigan is all but assured of picking up big points in the 1650, with 3 guys in the seeded final heat to Cal’s zero. Michigan also is going to pick up points in the 100 free, perhaps significant points. That just leaves the three 200 yard stroke events to erase what is likely a 50-60+ point gap. Are we expecting Cal to be 2 and 3 up in each of those races, and Michigan to have nobody scoring? Sure, 200 back will be a pick one for Cal. But Funk is better… Read more »

Louisville could be on a better place for 11th if de Lucca swam the relay like the 200 free..

Anybody know why the Harvard men are not swimming any of their individual events and also skipped some relays. Every event they qualified in their lanes are empty?