FINA Presents the Medals; Prize Money for the 2013 World Championships 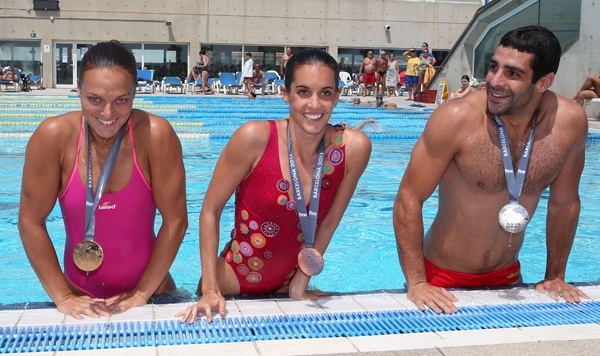 Last week, FINA presented the medals for the 2013 World Championships in Barcelona. At a meeting in Barcelona at the historic swim club CN Natacio-Barceloneta, three of Spain’s most famous athletes presented the Gold, Silver, and Bronze medals to the members of the crowd. Xavier Trias, the mayer of Barcelona, was at the presentation and expressed how excited he was that his city is hosting the championships.

“Everything we have seen today forms part of the image of Barcelona. The Championships will be in the limelight and we have to make the most of it. Hosting the major sporting event is important for the city and its citizens.”

The medals were designed by a company called lagranja. Ona Carbonell, Jennifer Pareja and Marc Minguell, three of Spains top athletes, jumped out of the water wearing the medals.

Medals aren’t all that’s at stake, however. There is a prize pool of over $3.1 million to top finishers in all of the FINA disciplines.

FINA will give out $3,100,500 dollars across 6 disciplines, including a whopping $1.56 million in pool swimming alone.

Prize money for the whole meet will be broken down as follows:

With money per placing going out:

I really like the design of the medals. Definitely better than the last time Barcelona had the Worlds in 2003.

swimmer – it’s somewhere in between. For NCAA rules, a certain amount of prize money is allowable, but it has to be only up until what covers expenses for the meet. I wouldn’t purport to be an expert on how “meet expenses” are defined, though, and for meets like this, there aren’t many.

There are also certain prize moneys that are allowed – like the money Missy Franklin got for her gold medals.

It’s a complex system that can’t really be explained with any brevity, unfortunately…

Wait, so Franklin was able to receive money for an Olympic gold, but not for those random Grand Prix meets?

Steve – yep, but the rule is specific to Amerians:

Hooooo boy. That is rich.

Do relay swimmers split the money four ways or is the prize money for individual events only?

cowboy – the documentation we read didn’t specifically state, but implied that the relay money would be split four ways, just as would the water polo money amongst the whole team, for example.

So what about prelim relay swimmers? Would they split the reward too?

would someone in the prelims get a check?

I wonder if it is anything like track. 2013 Indoor Track WC is 1/4 of the prize money goes to total group of six, 1/4 goes to the prelim group and 1/2 goes to the four in final. So if you have 6 runners and two of them run both prelims and finals and they are awarded $12,000 to the relay team: Finals only runners would get $2,000 each. The two that ran both the prelims and the finals would get $2,750 each. Prelim only runners would get $1,250. They found a balance between performance and work. However, if a competition or federation has a pay incentive for breaking a record, then only the final team gets the bonus.

why do prizes for womens diving go down to 14th place? this seems odd

This might explain why Hoszou is entered in so many events. She only needs to make the final to have a shot at at least $2,000. Not bad for a multi-talented pro athlete.

As to Hosszu’s multiple events, I don’t believe it’s about money. She has chances to get reasonably rewarded at World Cup Series which has some additional prize money in this year. Even if it were about money, why risking significantly better rewarded positions by pursuing cheap spots.

But as you said it: “might explain”. I cannot rule out that possibility even though I don’t believe in it.

So Missy will be able to keep the tens of thousands of dollars that she will win?
And she was allowed also to keep those prize money from the olympics?
But she’s not allowed to keep grand prix prize money?
And she’s allowed to receive free perks of attending parties, ceremonies, events for which I presume they paid for her transports, accommodation, etc.

aswimfan – with regard to grand prix money, it’s sort of a balancing act. It’s very complex (and I’ve been told that her prize money can’t go toward paying for an accountant to keep track of it all). Even the amateurs get a small stipend from USA Swimming, which is allowed to cover training costs, travel costs to GP, equipment, meet entries, etc etc etc. Then they can keep GP prize money to cover those same costs if the small USA Swimming stipend ($1750 a month) doesn’t cover them, but they can’t double dip.

Worlds is the “operation gold” meet this year.

Does anyone have information about how the prize money was distributed at the 2011 Shanghai or 2009 Rome? I’d like to perceive the direction to which money rewards are heading, up or down.

I’m happy with the fact that rewards are seemingly better than they were at short course World Championships. Even more I’m happy that also swimmers becoming 6th are rewarded. Being in a championship final is good performance and this gives some recognition for the hard work that is needed to become 4-6th.

$15000 is too cheap for a gold medal at a World Championship. All this training for not much glory and wealth. A pity.

$15,000 to win an event is better then most meets.. Assuming they do not get covered by a NGB, that pays for the trip and then some. Could be the weight given for a post Olympic year? I don’t know, but if I’m training to be a World Champion, I am definitely interested in the medal and title with the added bonus of the 15K.

Could be more if we didn’t have as many events. Get rid of those pesky 50s and that gets spread out amongst the rest. 😉