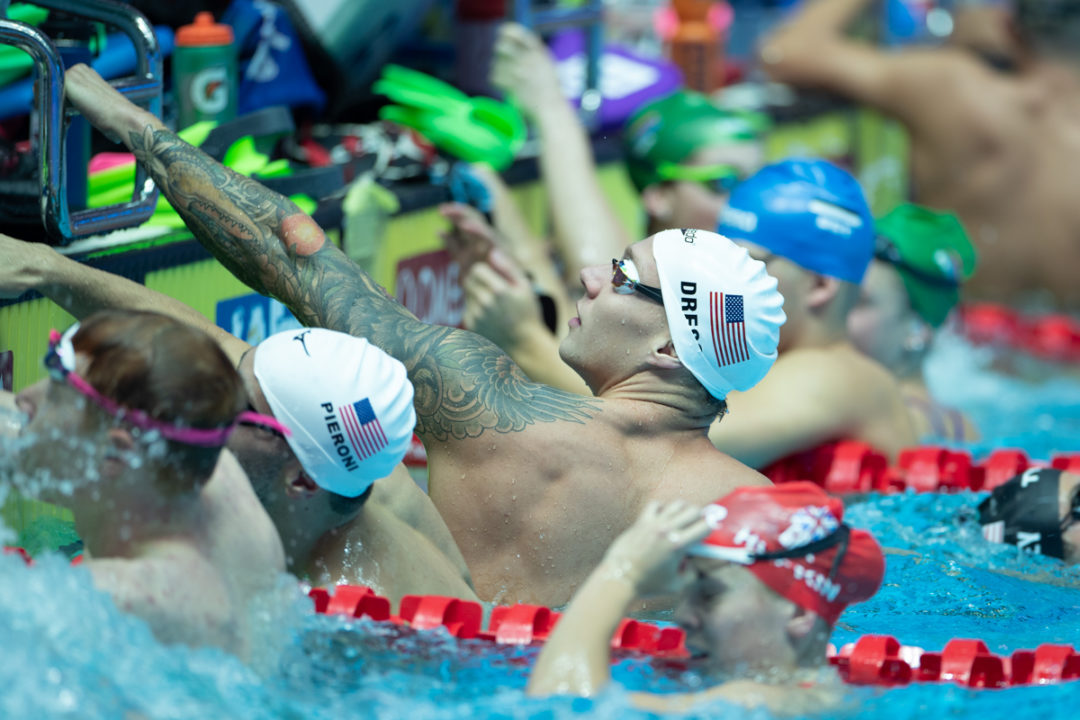 The 2nd day of swimming at the 2019 FINA World Championships is in the books, and with it came lots of memorable moments. Stock photo via “Rafael/Domeyko Photography”

The 2nd day of swimming at the 2019 FINA World Championships is in the books, and with it came lots of memorable moments. We’ve compiled a list of some of tweets and instagram posts about day 2 finals:

The meteoric rise of Canadian Maggie MacNeil continued today, with the 19-year-old turning 5th, then blowing past everyone to clock a blistering 55.83. Sarah Sjostrom has by all accounts been the dominant female sprint flyer for the past decade, putting this upset on par (or arguably above) Ariarne Titmus’ upset of Katie Ledecky in the 400 free on Night 1. MacNeil established new Canadian and Americas records with the swim, and is now the #2 performer all-time.

WATCH: Maggie MacNeil chases down defending Olympic champion Sarah Sjostrom on the back half to capture GOLD in the 100m FL at #FINAGwangju2019! #GoBlue (🎥: FINA)

The moments that made Maggie MacNeil a WORLD CHAMPION on Monday in Gwangju! #GoBlue (📸: SwimmingCanada/Ian MacNicol)

Maggie MacNeil swam alongside, and beat, reigning champ Sarah Sjostrom. Sjostrom had some words for MacNeil after the race #FINAGwangju2019

The women’s 100 fly medalists – Maggie MacNeil, Sarah Sjostrom, and Emma McKeon held up encouraging messages written on their hands for Rikako Ikee, the Japanese star who was diagnosed with Leukemia. The 19-year-old had been considered a strong contender to be on that podium prior to her diagnosis.

Our moment of the day comes from the top of the podium during the women’s 100-metre butterfly medal ceremony. 🙌 After receiving their medals🥇 Maggie MacNeil 🇨🇦 🥈Sarah Sjostrom 🇸🇪🥉Emma McKeon 🇦🇺 gathered on top the podium and raised their palms to the crowd, displaying a message to ailing 19-year-old Japanese swimmer Rikako Ikee. ❤️ Ikee announced in February that she has leukemia. She was the world junior champion in the 100 fly and had the fastest time in the world last year. She is aiming to return in time to compete in the Tokyo Olympics. 💪🏽 📷 via @swimmingcanada/Joseph Kleindl

Fresh off a World Record and the first swim in history under 57 seconds, Adam Peaty won his 3rd consecutive World Title in the 100 breast. Great Britain solidified that win by also earning a Silver medal from James Wilby.

American Sprint superstar Caeleb Dressel won the men’s 50 fly today in a new Champion Record and American Record. This race was a redemption shot for Dressel, who came in 4th in 2017, when he had an otherwise undefeated meet. In 2017, Dressel swam in 8 events, earning Gold in 7.

Swimming giants 🇺🇸 rarely go through a Finals-session without a gold medal and Caeleb Dressel kept up the tradition with a Championship Record in the Men’s 50m Fly 💻 http://www.finatv.live #FINAGwangju2019 #Swimming

The one that got away! Caeleb Dressel has come back from a 4th place finish in 2017 (where he won 7 Gold medals) to win the 50 fly in a new World Championship and American Record of 22.35!🥇🇺🇸 🏊🏻‍♂️ #TeamUSA #USA #Record #AmericanRecord #Swim #swimmer #swimmers #pool #swimming #gwangju #finagwangju2019 #finaworlds #worldchamps #worlds #legend #champion #recordbreaker #gold #winnerwinnerchickendinner #swimswam #swimming #swimlife #speed |📸 @rafaeldomeyko

A post shared by HungarianSwimmingAssociation (@magyar_uszo_szovetseg) on Jul 22, 2019 at 6:31am PDT

Ryan Lochte commented on a pst by Caeleb Dressel celebrating his 50 fly win. In addition to the standard “good job”, Lochte offered his own personal prediction for the men’s 100 fly. Lochte says the 100 fly World Record, held by a supersuited Michael Phelps, is going down.

Smart (and obvious) prediction from Lochte.

MP replied with two laughing emojis. Perhaps he thinks his record might stand

Pretty ignorant if he actually thinks his record will stand… dressel already a faster flyer than him, MP Textile isn’t that good.

I wouldn’t say Already. Yet.

he knows Dressel is the real deal to threaten his WR

If Ryan says so ,,, than its going down