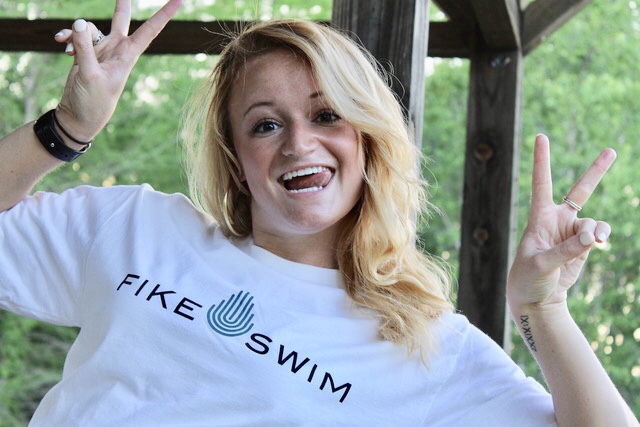 Fike Swim is thrilled to announce the addition of former U.S. National Teamer and elite butterflier Megan Kingsley to its... Current photo via Fike Swim

David has pledged to Swim A Million yards in 2020 and has dedicated his efforts to raise money to support The Cancer Research Institute.

Fike Swim is thrilled to announce the addition of former U.S. National Teamer and elite butterflier Megan Kingsley to its growing team of brand ambassadors. A former University of Georgia standout, Megan is now a member of Georgia’s pro group training under Jack Bauerle.

“I am so impressed with Megan and what she has had to overcome these last few years with her knee issues and the car accident. Her determination and toughness are the epitome of what it means to be a swimmer and we are lucky to have Megan on the Fike Swim ambassador team.” said Fike Swim founder, James Fike.

Few swimmers have experienced the highs and lows of swimming like Megan Kingsley. One week after qualifying for her first international team, Junior Pan Pacs in 2012, Megan dislocated her left knee. That was the beginning of a series of knee problems that nearly ended her career and which still plague her today. Along the way she has qualified for the National Team (2013-2014); had two surgeries that she was told would prevent her from being the same swimmer she once was; qualified for Olympic Trials in 2016; semi-retired from the sport out of frustration with the knee issues; and made a comeback in November of last year that was derailed two weeks ago by a motorist in a WalMart parking lot who ran into her.

Despite the setbacks, Megan is more determined than ever to compete for a spot on the U.S. Olympic Team next year. While preparing for the 2020 Olympic Trials, she is working for the Georgia LSC as an administrator putting in 20-25 hours per week and also coaching for the Athens Bulldog Swim Club. In addition, she will be helping Fike Swim test and roll out more of the innovative products it is becoming known for.

“I am beyond thankful for the opportunity to join Fike as an ambassador. The decision to go for 2020 after the challenges I’ve faced has demanded a need to Swim Different as a pro swimmer. I am looking forward to this opportunity and all it entails!” added Megan.

You can support Megan on her journey to Tokyo by following her Instagram and Facebook pages, and you can get the latest Fike Swim news, product updates, and videos by liking them on Facebook and subscribing to their YouTube channel. And you can get a candid look at Fike Swim’s journey to help swimmers SWIM DIFFERENT by following them on Instagram.

About Megan Kingsley
Here’s a short Q&A with Megan. The complete Q&A with post-workout meals, season and practice goals, and more can be found by visiting Fike Swim’s ambassador page.

Q: What is your favorite event?
A: “200 fly by a mile, which is funny since I used to hate it so much! I do think that racing the 400 IM short course is actually really fun when you’re in shape, though, and it’s a cool event to watch.”

Q: How many yards per week do you usually swim?
A: “Definitely over 50,000 per week depending on the cycle we are in and which distance the pool is! During the beginning of our seasons we load up with threshold and high volume, and then we drop down and also race a lot more the closer we get to our big meets.”

Q: What is one of your favorite sets?
A: “On Wednesdays we do a lot of pace/race work; this may be a set of 18-30 50s on varying intervals, and different kinds of paces. For example, we may do a set of 10 on :45 holding one second over pace, 8 on :50 holding your pace, etc. going down to below pace! For a set like that I would hold…read more”

Q: How did you get into swimming?
A: “I started swimming when I was 7 years old doing summer league and I actually HATED butterfly. My dad used to make me do it and I would cry! We moved around a bit but I really loved swimming and my lack of coordination in other sports showed swimming was the sport for me. So at the age of 8 I started swimming year round in South Carolina, finishing my whole club career in SC, before I went to the University of Georgia.”

Q: What is something most people probably don’t know about you?
A: “I am super passionate about people!  I used to struggle with crippling social anxiety but when I started to volunteer and get involved, I found out that I love the idea of a community.  I actually received a scholarship for my community service which I hope to use in the next few years.”

“We design products exclusively for the most difficult sport in the world.  We unapologetically place swimmers on a pedestal.  The rigors they embrace on a daily basis can only be understood by another swimmer and they deserve a company focused 100% on helping them succeed.  Whether you’re just starting out or training for Tokyo, we stand behind you.”
– James Fike, Founder

Man, Fike Swim is gonna have a monopoly on great comeback stories.

Are these girls paid a salary or do they just get to try out the products fike designs?