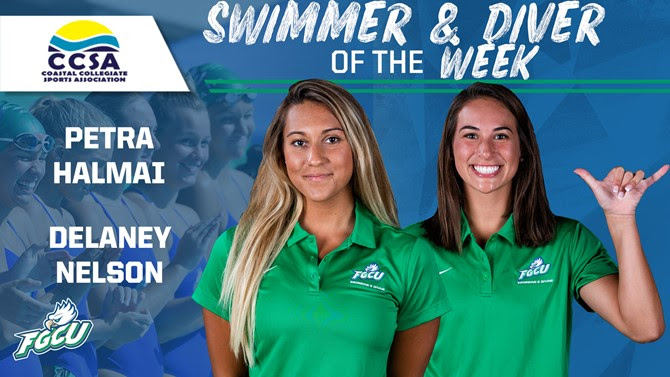 The Eagles are just one of two teams to have swept the CCSA weekly honors this season, having done so twice already. Current photo via FGCU Athletics

ATLANTA – For the third time this season, the FGCU swimming & diving team has swept the weekly CCSA accolades, as junior Petra Halmai (Dombovar, Hungary) and freshman Delaney Nelson (Cincinnati, Ohio) collected Swimmer and Diver of the Week honors, respectively. The selections, which were announced by the league on Tuesday afternoon, mark the fourth this season for Halmai and the first for Nelson.

The Eagles (8-7-1, 4-1 CCSA) are one of two teams that have swept the weekly conference awards this season. Georgia Southern is the only other program that has done so, having taken home both Swimmer and Diver of the Week back on Oct. 1, 2019.

“Congratulations to Delaney on her first Diver of the Week award,” head coach Dave Rollins said. “She has really started to come into her own and thrive with Coach Boyko. After a challenging weekend of racing, it’s great to see both Petra and Delaney being recognized for their accomplishments. Congratulations to them both on such well-deserved honors.”

During this weekend’s in-state circuit, which featured meets against FAU (Jan. 17) and Miami (Jan. 18), Halmai led the team with three individual wins. In the dual against the Owls, she earned victories in both the 100 IM (59.76) and the 200 Fly (2:05.29) and helped the Eagles to a second-place finish in the 400-yard medley relay. The following day, her time of 2:18.21 in the 200-yard breaststroke was good for a first-place finish in the competition against the Hurricanes and she helped FGCU to another second-place finish in the 400-yard medley relay. Including relays, Halmai accounted for 39 of the team’s points throughout the two-meet stretch.

Bouncing back from challenging conditions during Friday’s meet against FAU, Nelson had some of her best dives of the season against Miami. Competing against arguably some of the best divers in the region in a group that featured NCAA qualifiers from a season ago as well as international Olympic qualifiers, Nelson put up a season-best score of 256.43 on the 1m board, good for a third-place finish. Her score of 242.10 in the 3m event was also good for third and she paced the Green and Blue divers in both events.

FGCU has been featured in this season’s weekly awards all but five times. The team has racked up a combined six weekly selections, the most of any program in the CCSA. Campbell’s three are the second-most in the league.

The Eagles will return to the Nest this Saturday (Jan. 25) to host FIU on Senior Day at the FGCU Aquatics Complex. Competition against the Panthers is slated for a Noon start and will be preceded by a ceremony in which Rollins and his staff will honor the six members of this year’s graduating class.