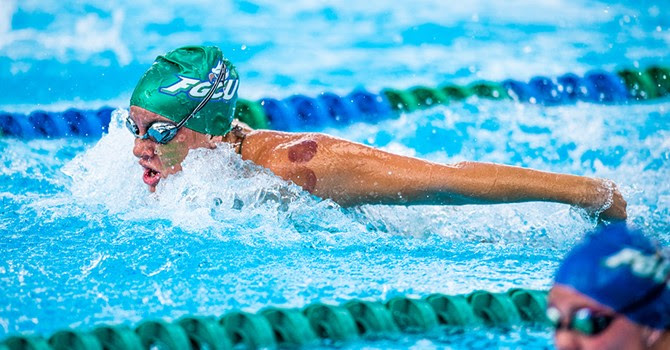 FORT MYERS, Fla. – FGCU head coach Dave Rollins has announced that a challenging schedule awaits the swimming and diving program for the 2019-20 season. The nine-time CCSA champions will be going for their 10th title in 12 years, as well as their seventh trip to the NCAA Championships. Highlighted by seven home meets, the Green and Blue will compete against four teams that registered points at the 2019 NCAA Championships.

“We knew that with a young group of athletes, we needed to create different challenges,” fourth-year head coach Rollins said. “This year’s schedule is a competitive combination of home and away meets that will help challenge our program and help our newcomers thrive as Eagles. We are looking forward to competing and representing the Green and Blue at the highest level.”

Prior to the start of the regular season, Eagle fans will have the opportunity to get a sneak peek of the 2019-20 squad as the team hosts the annual Green and Blue scrimmage (Friday, Sept. 27), as well as the Alumnae Meet the next afternoon at the FGCU Aquatics Complex.

Following the road stint, the Eagles will return home to host Vanderbilt on Friday, Oct. 25. Since October is breast cancer awareness month, FGCU’s home opener will be a pink out and Eagle fans will have the opportunity to purchase shirts that say “Together, we are stronger than cancer.”

Capping off their home slate for the fall, the Green and Blue will host Houston for a two-day duel Nov. 1-2. On that Friday night, attendees will have an opportunity to participate in a Halloween Costume Contest at the FGCU Aquatics Complex. Last season, the Cougars were represented at the NCAA Championships by multiple student-athletes in different events.

FGCU will then hit the road and head to the Midwest for a series of duel meets in Ohio and Michigan. The Eagles begin the road swing with matchups against Marshall and the University of Toledo at the Rockets’ home pool in Ohio (Nov. 8). From there, the Green and Blue will travel to Michigan to take on Oakland and host Eastern Michigan in Ypsilanti (Nov. 9). The Midwestern Eagles finished 32nd at the 2019 NCAA Championships and placed one swimmer on the podium.

Following the holiday break, FGCU begins the second half of the schedule with a meet against Illinois State, Tulane and CCSA rival Liberty (Jan. 4). Last season, the Flames captured the second CCSA title, snapping the runner-up Eagles’ streak of four consecutive championships. The two teams have finished in the top two at the CCSA Championships in each of the last 10 seasons. Hot chocolate will be available for fans who attend the meet.

The Green and Blue then host Stony Brook for a duel on Saturday, Jan. 11. The meet against the Seawolves will be the Eagles’ second to last of the season at home and members of the team will celebrate Staff Appreciation Day. Eagle fans who come out to support the team will be served donuts and hot chocolate.

From there, FGCU will leave Fort Myers to compete against in-state opponents FAU (Friday, Jan. 17) and Miami (Saturday, Jan. 18). Last season, the Eagles defeated the Owls by a score of 185-115 in Boca Raton. The Hurricanes finished 31st at last season’s NCAA Championships and picked up one bronze medal.

After the in-state circuit, the Eagles will return home for a final regular-season meet against the defending C-USA champion, FIU (Saturday, Jan. 25). The Panthers, who placed 37th at NCAAs last season, have won five-straight conference titles but have dropped two of the last three duels against the Green and Blue. The meet falls on the team’s senior day. Prior to the noon start, Rollins and his staff will honor the seven members of the class of 2020.

FGCU’s pursuit of its 10th conference championship since 2009 will take place at the CCSA Championships in Knoxville, Tenn. from Feb. 19-22. The meet will be held at the University of Tennessee’s Jones Aquatics Center.

Those on the verge of qualifying for the NCAA Championships will compete at the Last Chance Meet hosted by Florida from Feb. 28 – March 1. The Eagles that punch their tickets will advance to the national championship in Athens, Ga. March 18-21.

Additionally, the Green and Blue will attempt to send a member of the diving team to the NCAA Zone Diving Championships for the third-consecutive season. The event will take place from March 11-13 in Athens, as well.

For the full schedule, visit here.