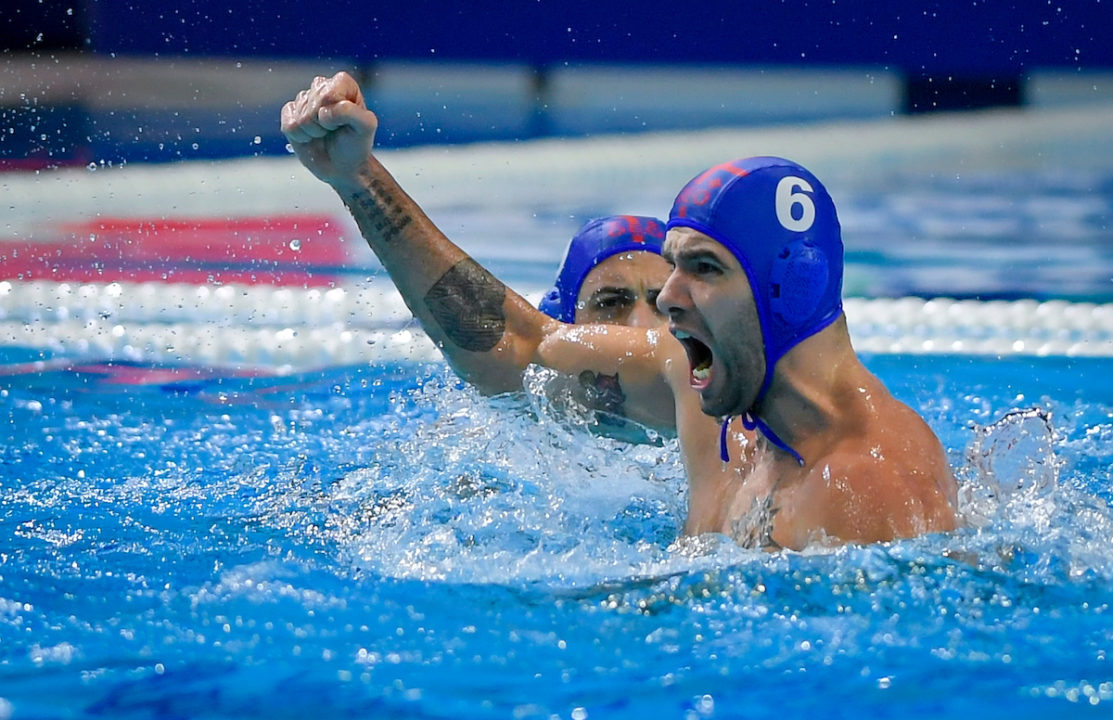 Greece had to overcome some initial struggles but Russia was pressed till the end by the Georgians and the game almost ended in a shootout. Current photo via Pasquale Mesiano / Deepbluemedia / Insidefoto

All four favourite sides qualified for the quarter-finals. Spain and Montenegro went through without any headache, Greece had to overcome some initial struggles but Russia was pressed till the end by the Georgians and the game almost ended in a shootout.

There were no hiccups on the first day of the knockout phase, though Georgia was close to upset the Russians who barely avoided becoming part of a penalty shootout. The action-packed first period saw 10 goals, the Russians were a bit better (6-4) then by halftime they seemed to have built a comfortable 9-6 lead. When they went 10-6 up, no one envisioned what might come next. It was Serbian-born leftie Boris Vapenski, who netted two in 75 seconds to give hope for the Georgians and it turned into belief as soon they were trailing by only a single goal at 11-10.

Russia responded well, though, and bounced back for a 14-11 lead in the fourth but the Georgians didn’t let it go. Their foreign legion, Croatian-born Marko Jelaca, Montenegrin Damir Tsrepulia and Italian Fabio Baraldi all contributed to create a miracle as they came back to 14-13 with 1:27 remaining. And they did have a possession to go even but Jelaca’s shot went wide and the Russians killed the remaining time.

In the following game Romania tried to achieve something similar against Greece and in the first half they managed to surprise their rivals by taking a 4- 1 lead early in the second period. The first signs of life from the favourites came in a span of 44 seconds, a double by Konstantinos Genidounias, still, the Romanians held on for 5-4 at halftime.

Head coach Theodoros Vlachos made order in the middle break, a different team came back to the pool and they also made order – within 46 seconds they turned the game and by the end of the third they decided it as well with a 6-0 rush in this period. They won the seconds half 2-10 and will meet European and World bronze medallist Croatia in the quarters.

In the first two QFQ matches Montenegro and Spain made it clear right at the beginning that they were not keen to entangle in any dogfight. Montenegro led 8-2 at halftime against the Turks and earned the biggest win of the day, while after a balanced first period Spain netted six in the second, won the middle two quarters 3-9 and switched back to energy-saving mood for the last period. They had a cause to do so as they will replay the 2018 final against title-holder Serbia in the quarter-finals.

In the games for the lower ranks, Slovakia could win its first match here, against Malta, while the Netherlands had to go through more bitter moments as they fell short against France and will play for the 15th place only, though the team had much more potential (hosting Olympic Qualification Tournament saves them a place in that competition – otherwise they would have lost the chance to take part).