18 Years Later, and Eric the Eel Is Still Making Waves 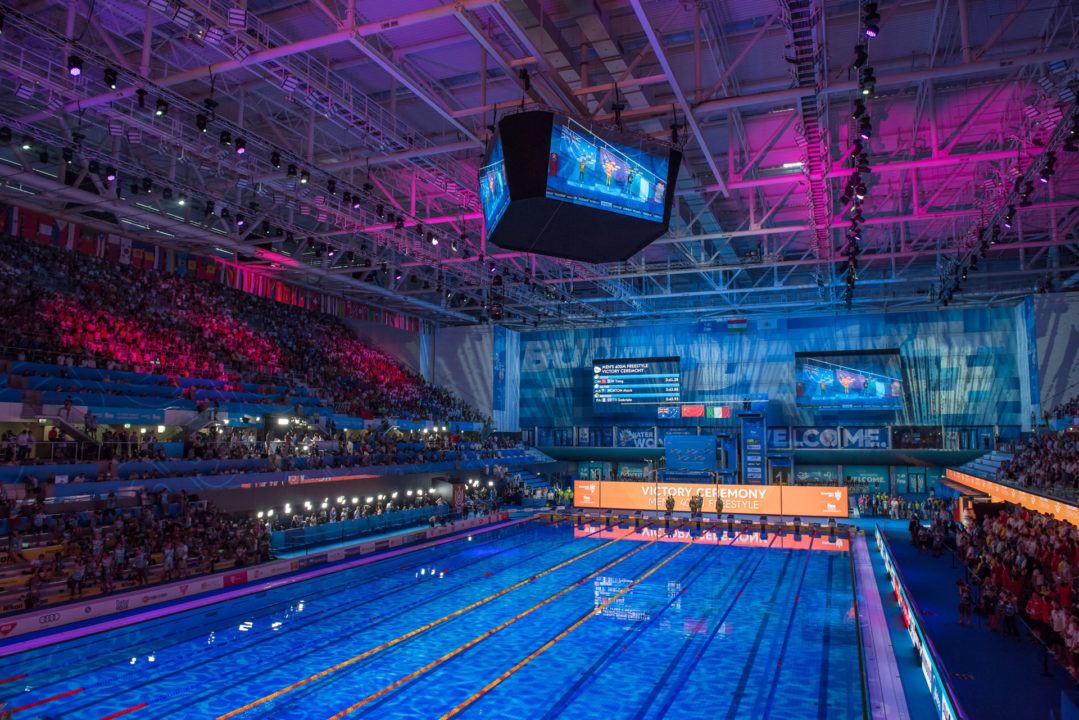 In 2017 Hungary held its biggest ever sporting event when it hosted the 17th FINA Swimming World Championships. Current photo via Hungarian Swimming Association

Background information: When it comes to sport, Hungary sits on top of the podium in terms of global rankings.  As far as total medals won at the Summer Games are concerned, Hungary is in the top 10. However, when a more precise, weighted comparison with regards to population is taken into account, Hungary is in 4th place (with Finland leading the table)*. From the total 491 Summer Olympic medals won by Hungarian athletes 73 were won by swimmers, and if we add the success of water polo, canoe-kayak it soon becomes clear that aquatic sports are hugely successful in Hungary, contributing to their overall popularity.

In 2017 Hungary held its biggest ever sporting event when it hosted the 17th FINA Swimming World Championships. It involved major investment in infrastructure, including the construction of one of the largest aquatic complexes in Europe.  What is more, this needed to be completed in record-breaking time due to the withdrawal of Guadalajara as a host city in 2015. Hungary stepped in at short-notice and organised the event 4 years ahead of the originally-planned date of 2021.  The fact that host cities of Budapest and Balatonfüred saw extensive construction, the popularity of swimming thanks to results in major meets, and the media buzz – which rose to record level 1 year after the 3 Olympic golds won in Rio by Katinka Hosszú (or the Iron Lady, one of the few, globally known sport figures) – surrounding the event converged at once to demonstrate that swimming was at its peak in Hungary at that time.

Challenge: after the huge success of the World Championships, which was considered to be the best ever not only by FINA but also by the athletes and sponsors, there was a great fan euphoria as well. Following this emotional outpouring, the Hungarian Swimming Association organized the first FINA Swimming World Cup to be held in Budapest in 2018. The format and brand awareness of this event was light years behind the World Championship, the 3-day competition obviously had a significantly lower budget and only one of the days fell on an October weekend, as opposed to the summer timing of the Worlds.

Idea: in order to raise the awareness of everyday people we needed to offer such a story, which attracted the attention of those outside the swimming community. To the pleasant surprise of many we invited Eric Moussambani, who in Hungary became popular thanks to a commentary which was not broadcast during the Sydney Games. There was a funny discussion between the commentator and the local studio, which later was uploaded on Youtube making Eric a hero in the country.

With his active involvement we organized 3 Eric challenges, which all contributed to the promotion of the FINA World Cup.

1. Before the start of the competition there was a duel between Eric and one of the anchor-men of a leading radio station.

2. On the first day of the FINA Swimming World Cup there was a 2*25m swimming contest with well-known athletes coming from other disciplines. The start list included Olympic gold medalist gymnast Krisztian Berki, Sandor Liu Shaolin, member of the short-track speed skating team, who lead the quartet to become the first Winter Olympic winners of Hungary and Balazs Baji, the first winner of a World Championship track medal (athletics) along with Peter Somfai (Olympic bronze medalist fencer), Istvan Vereb (wrestler) and Sandor Torghelle (football player with 42 international appearances for Hungary).

3. On the last day of the FINA Swimming World Cup there was another 2*25m swimming contest but that time with everyday people from all walks of life and age groups. These enthusiastic amateurs learnt to swim in the weeks/months before the event, so thanks to them and their coaches we spread the message that you are always welcome to start swimming and developing your skills.

Key learnings: it came to light that the presence of local and international swimming stars alone would not have been enough to appear and to stay in the forefront of the media. With the abundance of information and with the increasing number of sport disciplines the competition is fierce to remain in the mindset of supporters and sponsors. Our program proved to be a success because:

In conclusion we may say that the popularity of athletes like Eric the Eel, Eddie the Eagle and that of the Jamaican Bobsleigh team remains in the memory of the spectators even after many years. One reason for that could be that these athletes had a goal which was so much more that winning the gold medal. They tirelessly practiced in grim circumstances to realize their dreams and become part of the Olympic storybook. Even if some say that a certain “level” needs to be maintained to guarantee that only the best compete at the Games, we need heroes like them, as their humility and perseverance give us the stories to remember.

The author serves as the Head of Marketing and Sponsorship at the Hungarian Swimming Association, following his tenure held at the Organizing Committee at the 17th FINA World Championships.

The Hungarian Swimming Association was the organizer of the FINA Swimming World Cup – Budapest leg.

Very enjoyable article. Good to see and hear about psychologies, mindset and strategies from countries all around the world to help make swimming become even more popular. Thank you.

Eric the Eel? more like Eric of STEELE! that guys huuuuuuge now.

The best part of Eric the Eel is that he apparently went from that 1:52 in Sydney to a 56.9 four years later. That’s pretty friggan good, considering where he was.

And he was struck out of the 2004 Olympics because of a visa issue (which is frustrating as hell).

He must have been trying to replicate his Sydney form in Budapest then because he got beat several times.