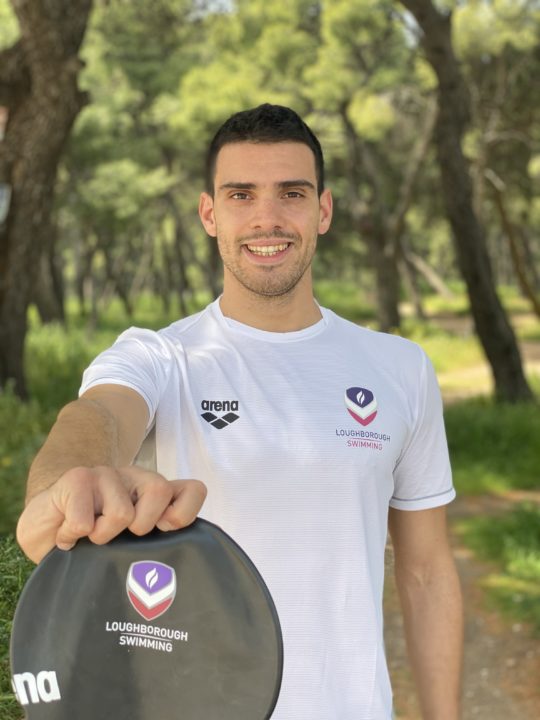 Emma McKeon already has Olympic medals from Rio but she just nabbed a spot on the Aussie roster to try to add more in Tokyo.

Vazaios, 25, will join coaches Ian Hulme and Andi Manley in Loughborough in the fall with an eye towards the 2021 Olympic Games in the pool, while also pursuing his Master’s degree in the classroom.

The idea first came up when Hulme brought a few of his athletes over to the Knoxville Pro Swim Series in January, using the opportunity to talk to some U.S. coaches who might have graduating athletes interested in coming to Loughborough.

“I met one of the coaches from NC State who said one of their former swimmers was looking to do a Master’s degree and swim in the UK next season and when he told me it was Andreas, I was really excited,” said Hulme in a press release. “I’m a huge fan of the NCAA system and have followed Andreas’s career closely — watching him win European Gold last December in Glasgow. One of the Greek swimmers we have on the team already (Asterios Daldiogiannis) reached out to him and we discovered he wanted to do a Master’s in Sports Psychology.

“We flew him over for a visit back in February to have a look around the University, meet some of the senior lecturers and of course, swim with the team. For Andreas, it was the perfect fit; a vibrant, enjoyable and professional environment which would meet his very high academic and sporting aspirations.”

Vazaios is anxiously anticipating the opportunity to continue his pursuits both academically and athletically.

“I am super excited that I will continue my studies in Sports and Exercise Psychology at Loughborough University,” he said. “This was my dream since I was in high school and I feel lucky to make my dreams come true in the world-leading university in sport-science subjects. In addition, I will be able to keep swimming with the best team in BUCS and at the most equipped facilities in order to improve my weak points professionally. This way, I get the opportunity to have the perfect balance between academics and sport.”

Vazaios was a four-time NCAA champion over his three-year career with the Wolfpack, transferring to NC State in the fall of 2016 from a Greek university. The native of Athens won back-to-back individual titles in the 200 fly in 2018 and 2019, and was on the winning 800 free relay teams in 2017 and 2018. Overall he was a 13-time All-American.

Internationally, Vazaios represented Greece at the 2012 Olympics as a 17-year-old, and then followed up by placing 11th in the 200 IM four years later in Rio. Three months prior to the 2016 Games, he won the LC European Championship title in the 200 IM, and added a pair of titles at the 2019 SC Championships in Glasgow in December.

Manley, the Loughborough Director of Swimming, is looking forward to having Vazaios join the team as he comes with purpose for both his degree and his swimming.

“We are delighted to welcome Andreas to the Loughborough Swimming team,” said Manley. “His experience and achievements both internationally for Greece and from his time at NC State are outstanding.

“He will bring so many great attributes to the team that will inspire his new team-mates to become even better – in and out of the pool. He comes to us with a really clear vision on what he wants to achieve academically and as an international swimmer and its going to be really exciting to be part of his journey and help him in achieving these goals.”

Vazaios is currently the Greek national record holder in the long course 200 free, 200 IM and the short course 100 fly, 200 fly, 100 IM and 200 IM. After wrapping up his American collegiate career in March of 2019, he competed for the DC Trident in the inaugural season of the International Swimming League, winning the 200 IM in Naples and College Park.

The university has a dedicated international officer in Lucy Pandit ([email protected]) to support students from North America and Canada through the application process. The coaching team would also love to hear from interested student-athletes and can provide further information on the swimming programme via Director of Swimming Andi Manley ([email protected]).

I think that’s the first time I’ve ever seen a “commitment“ type photo in relation to a UK uni. I know some will hate it, but I think it’s pretty cool to see it develop over here.

I’m new to the British uni system so is he still able to swim in the ISL and travel like a pro or is it similar to the NCAA?

Lots of British pros swim in the BUCS meets, including names like Adam Peaty and Duncan Scott.

He’ll be able to swim ISL. Many in the UK Uni system competed last year.