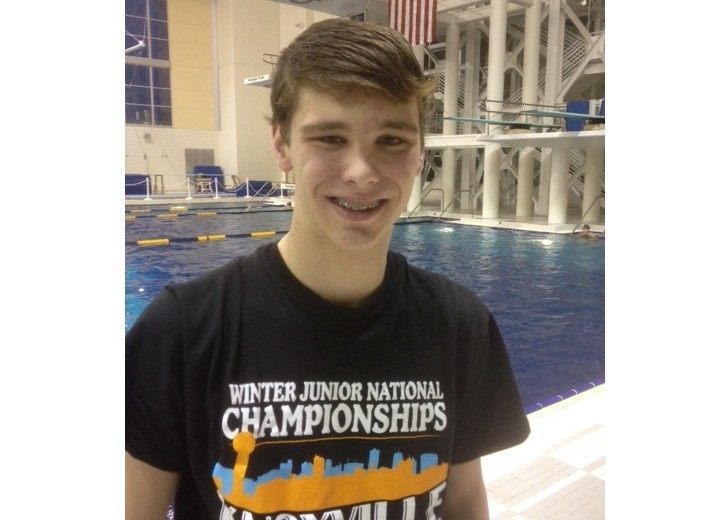 Add another National Age Group Record to the tally for what has been an unbelievable weekend of junior swimming in the United States, as 14-year old Ethan Young of the Carpet Capital Aquatics Club broke Ryan Murphy’s 13-14 200 yard backstroke National Record on Sunday at the Georgia Senior State Championships.

Young took his race out very quick as compared to Murphy’s old record. What was so surprising about this swim is how much of a time drop it was. Coming into the weekend, his best time in the race was a 1:51.0; then in Knoxville on Saturday at Junior Nationals, he was a 1:52.29.

Then, suddenly, after traveling back to Georgia in time for morning prelims, almost 6 seconds came off and he had a record. He finished 2nd to Gunnar Bentz (1:46.05). How that time came off so quickly is a big mystery, though perhaps the 1:52 on Saturday was motivation to come back to Georgia and swim the meet on Sunday at all. His coach, Charles Todd, made some impressive adjustments overnight, specifically on working with Young’s streamlines, which he credited for the difference.

That’s the third of Murphy’s NAG Records that were broken this weekend, after his 15-16 50 went down (to two different swimmers) and his 17-18 100 back record went down to Jack Conger.

how do you drop 6 seconds in one day…

yeah somehow driving a few hours home and then swimming the next morning doesn’t seem like taper to me. I said one day not 1 week… stupid

I heard they drove him to the meet in a modified trailer/ oxygen tank.

I heard he put this on his suit, back and chest to swim faster:

haha that would make sense. where can I get myself some of that

Ben, remember when we watched him do the 200 back at Knoxville? haha

Really the 6 seconds were dropped over the course of 10 months. He swam 1:51.80 at the GA 14&Under state meet only two days after his 14th birthday. He broke this record and dropped this time thanks to his under waters. He had superb underwaters and kicked got ten underwater kicks off of every wall, pretty good for a 14 yearold i have to say.

He is 14. Those things happen.