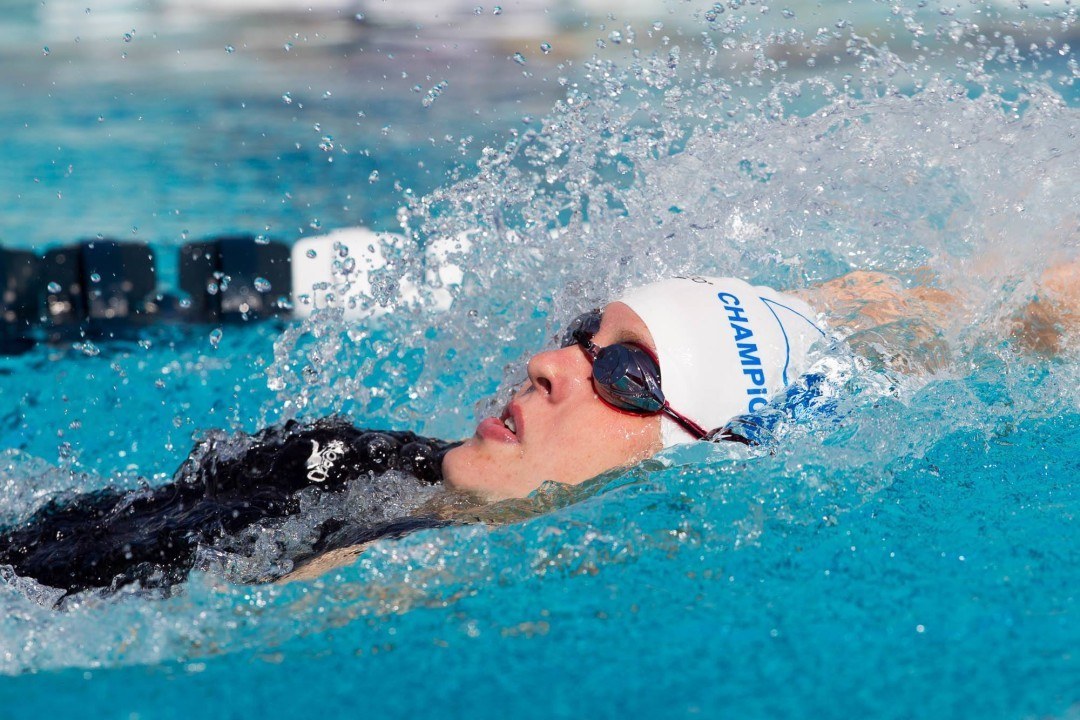 Emma Schanz added her third win of the week on Saturday, and now has four best times in four swims in Federal Way. Archive photo via Tim Binning/TheSwimPictures.com

After taking the day off on Friday at the 2015 Sectional Championships in Federal Way, Washington, Washingtonian Emma Schanz was back in action on Saturday evening with another win – her third of the meet – coming in the 100 yard backstroke.

Not only was this another victory for the UCLA commit, but it was a third best time as well, as she swam a 52.84 to top the field by more than a second.

Trying to pull off another double, Schanz’s first blip of the night came in the 100 breaststroke, where a 1:01.39 placed her only 3rd. That was still another lifetime best, though, as she continues to fill out her resume ahead of her collegiate career. On Thursday, she won both the 200 backstroke and 200 breaststroke in back-to-back swims.

The 100 on Saturday, however, went the way of Kimberly Williams of the host Bellevue Club Swim Team with a 1:01.31. That’s her best time as well – she and Schanz both dropped about half-a-second to finish within a tenth of each other.

In the women’s 100 fly, Bartel’s Fort Collins teammate Bailey Nero picked up a win with a 52.81. That makes three victories for her as well, after earlier wins in the 400 IM and 200 fly this weekend.

Bartel and Nero would finish the day as the leadoff and anchor, respectively, to the winning 400 free relay (3:24.73). They were joined by Elise Forzley and Andi Johnston. Nero was a second-and-a-half faster than the Bellevue Club’s anchor to give her team the win by a mere two-tenths of a second in a great come-from-behind battle.

On the men’s side of the meet, the King Aquatic Club duo of Tommy Anderson and Mathias Oh continued to lead the charge, as they each picked up individual victories making four total for the meet so far.

They also combined for another relay win, and haven’t lost one yet this week.

Anderson kicked things off with a 47.24 in the 100 backstroke, which is his best time. Oh came back later in the session to win the 100 fly in 47.92. Overall, Oh hasn’t been as successful, as compared to his own historical record, as Anderson has been this week, but both have had good meets.