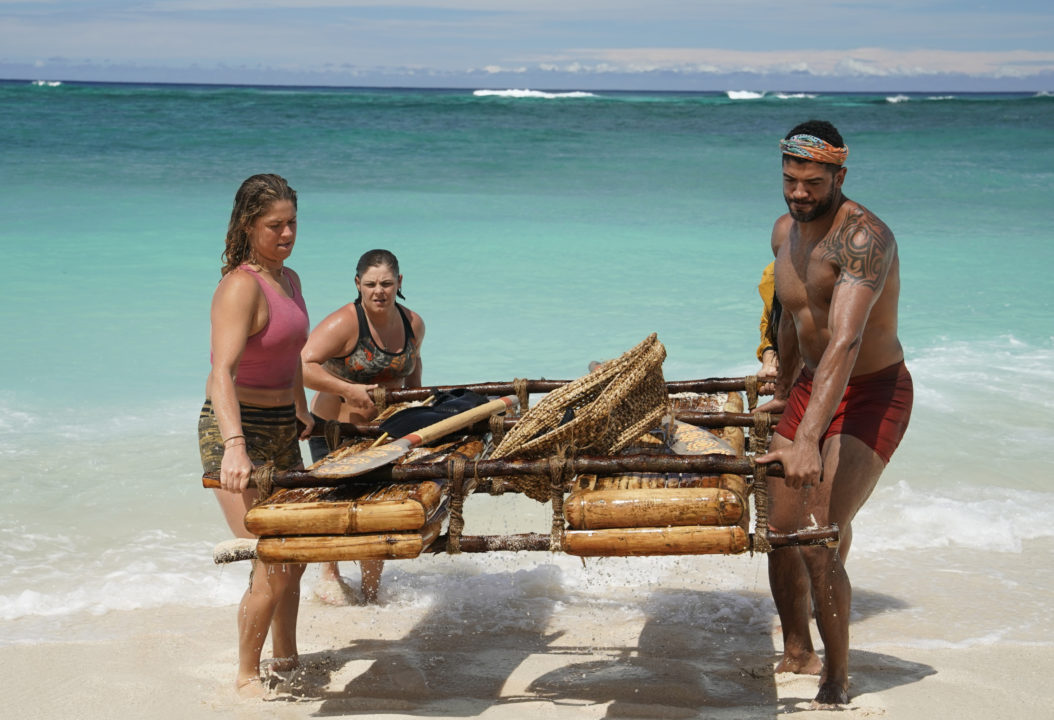 The immunity challenge heads back to the water, giving Elizabeth Beisel another clear chance to shine. But the women's alliance is on the rocks in week 3. Current photo via Robert Voets/CBS Entertainment

Purple tribe deals with the fallout of last week’s blindside. We don’t really care. Beisel is presumably sleeping soundly at the other tribe’s camp.

When we rejoin the orange tribe in the morning, there’s some moderately bad news for Beisel: the women’s alliance has a clear 5-4 majority in the tribe… but the men are onto them. And the fifth vote, personal injury lawyer Karishma, is feeling some doubts about the alliance.

As the women suplex each other in the shallow water (no kidding, that’s how they’re choosing to pass the time), Karishma talks about not fitting in with the younger crowd – the core of that alliance is Beisel (26), Missy (24), and Chelsea (26), and 41-year-old Elaine seems to be adapting well, leaving the 37-year-old Karishma on the outs.

As worry starts to set in for some castaways, others are feeling their bond strengthen. Make sure your evening is free. #Survivor starts at 8/7c on @CBS: https://t.co/6gmDVpTTZF pic.twitter.com/ZCabU5B7Ha

Later on, disaster strikes as Karishma slices her hand while cutting a coconut. There’s definitely some weird editing going on that makes this scene hard to parse. Karishma is very freaked out by the cut – “I can see my bone,” she says – and actually winds up on her hands and knees on the beach. Meanwhile the rest of the tribe is having casual conversation behind her and no one is shown even asking if Karishma is OK.

It’s hard to imagine the whole tribe completely ignoring her (maybe it was a fairly muted response that was edited to look like total indifference), and Karishma might be acting a little overly-dramatic about the whole thing. “If I would have chopped my head off, they wouldn’t have flinched,” she says. Which seems… extreme.

Either way, this women’s alliance seems to be in shambles. “Each and every person on this tribe is dead to me,” says Karishma, reasonably.

Island of the Idols: Beisel’s Deal Continues to be the worst deal in the history of deals

Orange tribe sends its second member to the Island of the Idols this week, which means Beisel’s week 1 lie about what happened there could be in danger of being exposed. On the other hand, it could give her an instant ally if that person also lies about what happens.

Admissions counselor Vince is randomly chosen, and in a stroke of good fortune for Beisel, the whole tribe immediately decides to vote him out. Like, immediately. The boat has barely left the shore by the time the group has agreed to target Vince.

There’s a guy on this season named Dean, which is apparently a name SwimSwam commenters love. This Dean is clearly not a Harvard student, though, as he makes a huge blunder, suggesting that the tribe split the vote to flush out any immunity idols Vince could find. The problem with that is that splitting the vote requires two targets – Vince and a backup target in case he plays an idol and nullifies all votes against him. And every other tribe member is right there on the beach when Dean suggests it.

“Everyone else is here,” Chelsea says quietly.

Beisel is playing with a bunch of geniuses here.

Karishma pretty much figures out she’s the secondary target. And then Vince does indeed get an idol. His challenge is sneaking into the opposing tribe’s camp late at night and stealing fire. K. We’re finding out that Beisel really got the worst deal in week 1. No one could beat Boston Rob at firemaking. Kellee basically got the world’s easiest quiz and Vince gets to pretty much play Capture the Flag against 9 people who don’t know they’re playing.

Side note: it is fun watching Vince learn how to army crawl from Sandra, noted challenge liability who famously faceplanted while trying to walk on the beach in Season 20. If you can handle some explicit language, this recap does a pretty good job of capturing the moment.

The immunity/reward challenge is once again in the water. And it sure feels like they built the swim to be longer than usual just so Beisel could show off.

When you hear about this week’s reward… #Survivor pic.twitter.com/SwJNDkB0bg

And she does. She’s up against lifeguard instructor Janet, who is also a very solid swimmer. But Beisel crushes the overkick in what must feel like the shortest sprint of all sprints to a former 400 IMer. What really builds the lead, though, is how fast Beisel can dive down and untie the tribe’s key. Beisel does it in one attempt, the second-straight week she’s dominated in underwater-untying. Too bad they never added that as an Olympic event.

Oh it’s time for a swim?! THATS MY TYPE OF CHALLENGE BABYYY https://t.co/d6UCrISzcT

The challenge is one of the coolest Survivor has done in a long time, with the tribes balancing on teeter-totters to untie bags of puzzle pieces at either end. Beisel’s lead allows her tribe to figure out the balance portion first, but they choke hard on the puzzle again.

“It’s never over until it is over, and this is far from over.”-@JeffProbst #Survivor pic.twitter.com/NEe2iybfz1

It’s Karishma who is mostly panicking. Beisel actually seems to have a bead on the puzzle from the sidelines, suggesting they focus on the colors of the pieces rather than their shape. But she and BFF Missy are dangerously close to the pitfall most overly-competitive types fall into: burning bridges with tribemates in frustration during challenges.

There’s a lot of planning and counterplanning going on at orange beach. Beisel is mostly staying out of the center of it. She’s locked in with Missy, who is kind of pushing things strategically. Being the quieter player in a tight twosome is often ideal in Survivor. Missy gets to do most of the dirtywork in setting up boots, and if things ever flip on that duo, Missy is probably the first one who gets booted.

Beisel gets a key confessional talking about how she wants to keep Tom around. As professional athletes, they connect on a different level. And Tom is pretty unthreatening strategically. Old guys tend to get into an alliance and be fiercely loyal to it. For Beisel, a long-term alliance with Tom and Elaine is almost a dream scenario.

And it’s kind of underplayed through some tribal council drama, but Beisel does get her way. Tom stays, and the majority splits their votes between Vince and Karishma. They do an excellent job keeping that plan a secret, too, and Vince doesn’t play his idol, going home with the game-breaking advantage in his pocket. Well played this week, Beisel.

There has to be a tribe swap coming in the next few weeks, but Beisel has pretty good connections to weather it. She seems close with Tom, but also has a good bond with Missy, Chelsea, and Elaine. Karishma is the obvious wild card after taking a lot of votes this week.

Next week appears to be a Survivor classic: the ‘walk around blindfolded in a field of objects at crotch level’ challenge. Beisel gets to be the caller, which can be a strategically dangerous position (if you lose, you take most of the blame), but is certainly less dangerous physically.

I think Karishma may have messed up her game with her performance this episode. Real shame that Vince went. Thought it might have been Tom.

If I were Vince, I’d have used Tribal Council to call out Beisel for lying about what happens at Island of the Idols to show my trustworthiness and breed mistrust in her alliance partners, especially with an idol in my pocket and nothing to lose, but I think the calm, cool, and collected lesson Vince got actually worked to his detriment this time. Beisel still has a chance at making herself even more of an asset by pulling aside her women’s alliance and telling them about IOI and to bargain for a better offer. Especially Missy. That’s a bond you want to keep as long as possible.

She doesn’t know you can bargain for a better offer.

She does, because Rob told her she could have asked for a better offer instead of taking the first one, but he didn’t tell her that until after she accepted the offer.