Efimova: ‘Rules Must Be Applied Equally To All Athletes, Not Just Russians’ 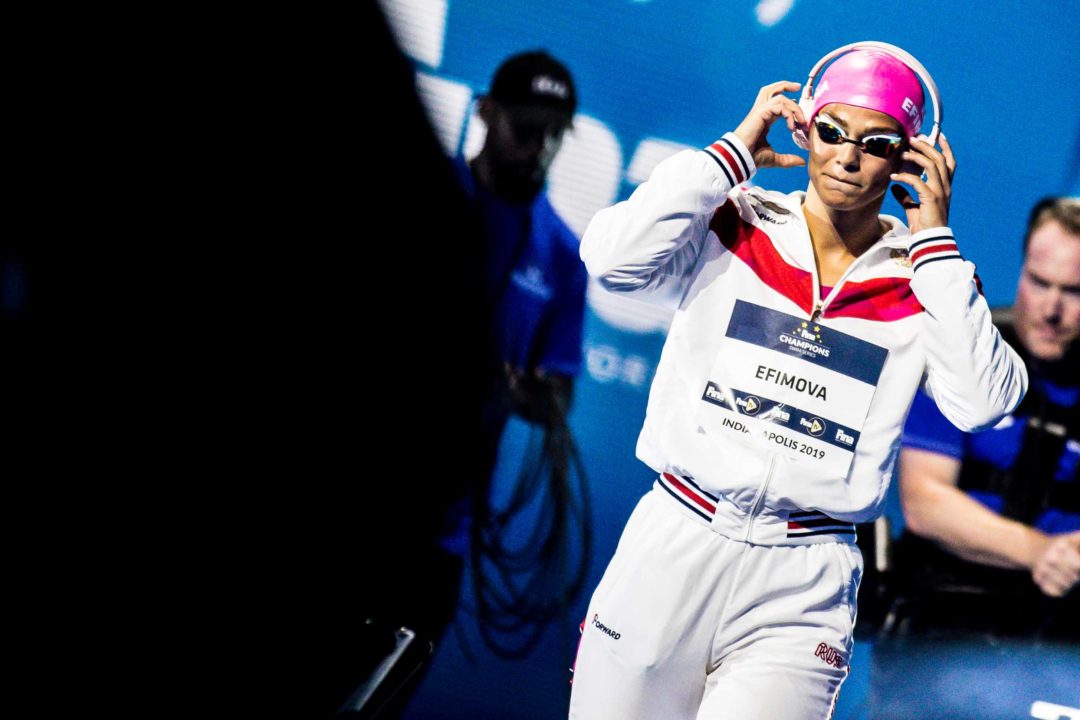 Russian swimmer Yulia Efimova says she shouldn’t be punished a second time for a doping ban she served five years ago, and that Olympic bans should be applied equally to non-Russian athletes with prior doping violations.

Efimova spoke to Russia’s state-sponsored news outlet RT in the wake of WADA’s decision to consider Russia non-compliant for a four-year period. The ruling by WADA will keep Russia as a nation out of major international competitions for the next four years. However, individual Russian athletes will be able to compete, if they can demonstrate they aren’t implicated in the ongoing scandal over a state-run doping program within Russia.

Specifically, WADA says that athletes must show “that they are not mentioned in incriminating circumstances in the McLaren reports, there are no positive findings reported for them in the database and no data relating to their samples has been manipulated.”

Efimova was never reported among those named in the McLaren report. However, she did test positive for DHEA in 2013 and served a two-year ban. She also tested positive for meldonium in 2016, but wasn’t suspended because meldonium was legal through December 2015, and could conceivably have remained in her system through her positive tests in 2016.

It’s not clear in the wording of WADA’s release whether a “positive finding… in the database” refers to any positive test in the past, or merely a positive test in the specific Moscow anti-doping lab database where WADA says data was manipulated. However, if her 2013 positive test is grounds for an Olympic ban under WADA’s policy, the two-time Olympic silver medalist Efimova says she will fight that in court.

Efimova also said that if 2020 Olympic bans are being handed out for past violations, the same rules should apply to athletes from every nation, not just Russia:

“If you introduce those rules, they must be applied to all athletes,” Efimova said. “Yes, long ago I made a doping violation and I was disqualified for almost two years. But there are a great number of US and European athletes who have a similar situation regarding doping and they are competing without any restrictions. If you want to introduce those regulations, they must be equally applied to all athletes, not only Russian competitors.”

Tip for Efimova: Every now and then, it’s a good idea just to keep one’s mouth shut so as to NOT DRAW ATTENTION to oneself.

She was speaking to Russian state sponsered news. The Russians still love and support her so I doubt she’s too concerned about our opinion.

My god. I’ve never felt so inconsequential. I thought every swim star hung on our every word. Just the other day, Justin Wright bought a medieval rack to stretch himself off Amazon at my suggestion.

And be like you defenseless gray unknown nobody. Enjoy your life!

Maybe Efimova can explain why a 20-year old world caliber athlete was taking Meldonium? Do you have heart disease?

yea, her and Sun Yang. It seems that there is a high correlation between having heart problems and setting swimming world records. Who would have thought?

Is this surprising? The correlation between asthma & ADHD and Olympic medals is also very high.

There have been studies out of, IIRC, Germany or Hungary that found that even though swimming was often recommended for asthmatics for the warm moist air, a poorly ventilated pool or one where they didn’t get the chlorine mix just right could actually make asthma worse and increase the odds of a non-asthmatic athlete training there to develop exercise-induced asthma.

Yeah sure ok. But then explain the same effect on, say, cyclists, which also see a high correlation in asthma TUEs

No one with a legitimate asthma diagnosis has ever been advised to swim due to the warm moist air. Swimming builds lung capacity which helps with asthma. The humidity hampers most asthma symptoms, most severe asthmatics are advised to move to the south west, due to the dry climate.

I don’t know about world records in swimming, but I was told by my own doctors that there is a pretty strong correlation between high intensity distance training and certain heart arrhythmias.

Heart arrhythmias are one thing but meldonium is typically used for individuals with heart failure or coronary artery disease…excessively rare conditions in athletes in peak physical condition.

Vote Up28-3Vote Down Reply
Casas 100 back gold in Tokyo

Also Dana Vollmer, who had her heart issues surgically treated and lated worked as a spokseperson for the American Heart Association.

When you have severe heart condition, you go under surgery TWICE, like Chalmers.

Catheter ablations are not what most people would consider surgery. Risky, sure, but most are in and out of the hospital in 24 hours.

It is invasive, has life threatening risks and is for a serious condition…never minimize other peoples health conditions. The fact modern medicine has reduced the process to 24 hours doesn’t remove its seriousness.

Thanks for the lecture. Try this. There is less than a 1% risk of a life-threatening complication for catheter ablation for SVT, and in a healthy young adult, it’s even less. It’s essentially the same risk as childbirth in the U.S. Not to minimize either, we don’t have comments about Dana Vollmer worried about her life-threatening risks as she pops out kids. But go ahead and make it a bigger deal than it is and go about your lecturing ways.

Chalmers, Blume, and Soni have all had heart surgery. If you are faking a condition to dope, that’s taking it pretty far.

Soni, Blume, and Chalmers all had surgery for their conditions. That would be a pretty extreme step to take if you were faking a heart condition to dope.

They had arrhythmias, not heart failure . As Phillymark said, it’s ridiculous that athletes were on meldonium

I find it hard to believe that a world-caliber athlete at any age couldn’t come up with a few billion reasons why they should take meldonium.

The evidence for this, especially for sports performance in athletes, is about zero. You know what does enhance cardiac performance and mitochondrial function in athletes? Caffeine. So if you were taking meldonium over Dressel’s pre-workout potion, you were missing out.

The caffeine limit really should be reinstated especially because all athletes can’t benefit from it equally. Take for instance some of the athletes with supraventricular tachycardia spoken about in this comment section. No way they would be able to take the kind of huge doses Dressel is obviously taking without serious consequences. They also aren’t the only group of people unable to take caffeine at performance enhancing doses, many people simply can’t tolerate those levels of doses without consequences either physical or mental. It also doesn’t just help cardiac and mitochondrial function but also primes the nervous system in a way that is perfect for sprints. Watching him look like he’s tweaking at the end of big races is not… Read more »

And the medical and scientific evidence for that claim in athletes is zero. Cite a legit scientific study that proves it has any sports performance effects to “achieve optimal competitive advantage.” I’ll save you the trouble. There are none, as the WADA scientific director acknowledged. It’s a pathetic drug, and as proof, no one takes it for heart disease anymore and the FDA never approved it.

Look I’m against cheaters, and am among the first to bash them, but this isn’t Ben Johnson, Lance Armstrong, Mark McGuire, or A-Rod. The likelihood that meldonium enhances sports performance at all, particularly in an elite trained athlete, is speculative at best (as WADA’s scientific director freely admitted), and certainly not supported by any compelling evidence (as he also admitted). It was developed in Latvia (a bastion of sophisticated and rigorous research, FFS) in the 70’s to enhance the sexual performance and sperm motility of boar, for crying out loud. Then there was the myth that is helped Soviet soldiers at altitude. It probably has no more effect in an elite trained athlete than Lochte’s vitamin water infusion. It wasn’t… Read more »

You all are forgetting one thing. When she was taking meldonium, it was 100% legal. The same way all athletes are taking caffein in one form or the other. But it may get banned next year. Also, nobody knew, meldonium stays in your body for years. Do your homework, people! Don’t be braindead haters

Why should she explain anything to you? She only has to explain to CAS. CAS didn’t even ask this question

While I have zero sympathy for Efimova, her argument did make a point. Why can some teams compete with 50% of their athletes using asthma & ADHD medicine and not get considered as state-level doping? WADA should be as strict with TUE abuse problem as they are with Russian scandal.

Because those TUEs are all legitimately applied for and approved. You can argue that there is too much leniency in granting TUEs for certain medications/conditions and that may be a valid point. But there is absolutely no comparison to state-sanctioned doping (replacing tainted samples with clean ones) and an absolute lack of oversight (manipulating test result databases).