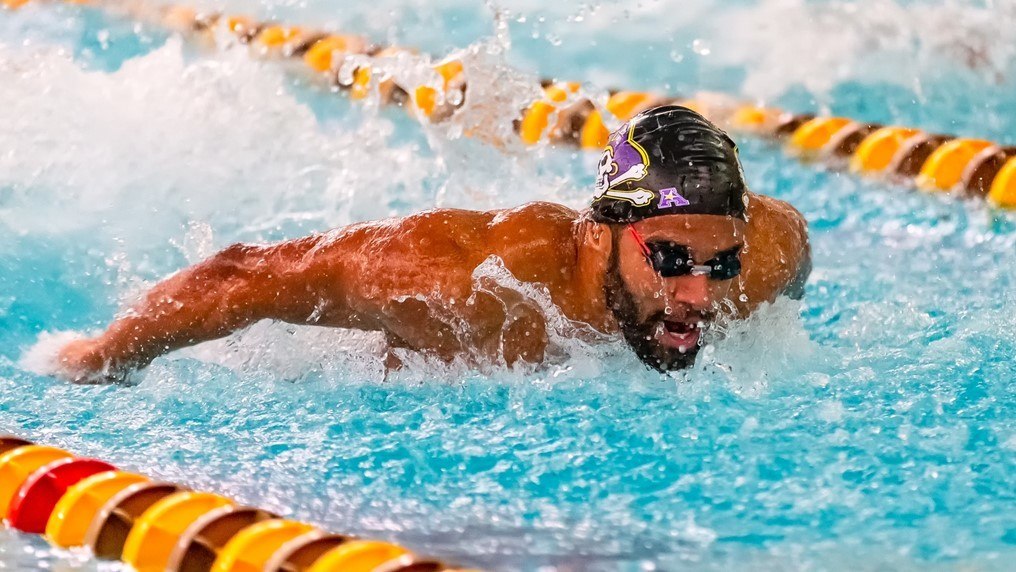 The ECU swimming and diving teams wrapped up their dual meet schedule Saturday afternoon with a sweep of the UMBC Retrievers at Minges Natatorium. The Pirate men posted a 194-106 win, while the women earned a 157-143 victory. Current photo via East Carolina Athletics

GREENVILLE, N.C. — The ECU swimming and diving teams wrapped up their dual meet schedule Saturday afternoon with a sweep of the UMBC Retrievers at Minges Natatorium. The Pirate men posted a 194-106 win, while the women earned a 157-143 victory.

The ECU men’s squad finished with a dual meet record of 4-2, capping their 36th straight season finishing at .500 or above, while the ladies posted their 27th consecutive winning campaign with a 4-3 record.

“I’m very proud of the team today,” Pirate head coach Matthew Jabs said. “To send our nine seniors out on a win is just awesome. This is a really close group, and to watch them support each other today and enjoy this win is really special.

“On the men’s side we wanted to get off to a fast start, and continue to keep the pressure on throughout the meet. For the women we knew it would take a total team effort if we were going to pull out the win today, and both teams delivered in a big way.”

ECU claimed first-place in 12 of 16 events, including both the 200 medley and 400 freestyle relay.

ECU returns to action Feb. 8-10 at the Nike Cup Invitational in Chapel Hill.

GREENVILLE, N.C. – In the regular season finale, the UMBC swimming and diving teams fell to the East Carolina Pirates on Saturday afternoon. The women fell by a score of 157-143, while the men fell 194-106.

Senior Alexander Gliese (Columbia, Md./Long Reach) followed up his record-breaking day against Howard on January 6 by breaking the Minges Natatorium record in the 200 back with a time of 1:48.15.

HOW IT HAPPENED – WOMEN:

HOW IT HAPPENED – MEN:

Gliese won two events, including his record-setting performance in the 200 back and the 100 back, where he touched in with a time of 50.00.

The Retrievers will next return to the pool February 14-17 as they compete at the America East Championship at WPI in Worcester, Mass.