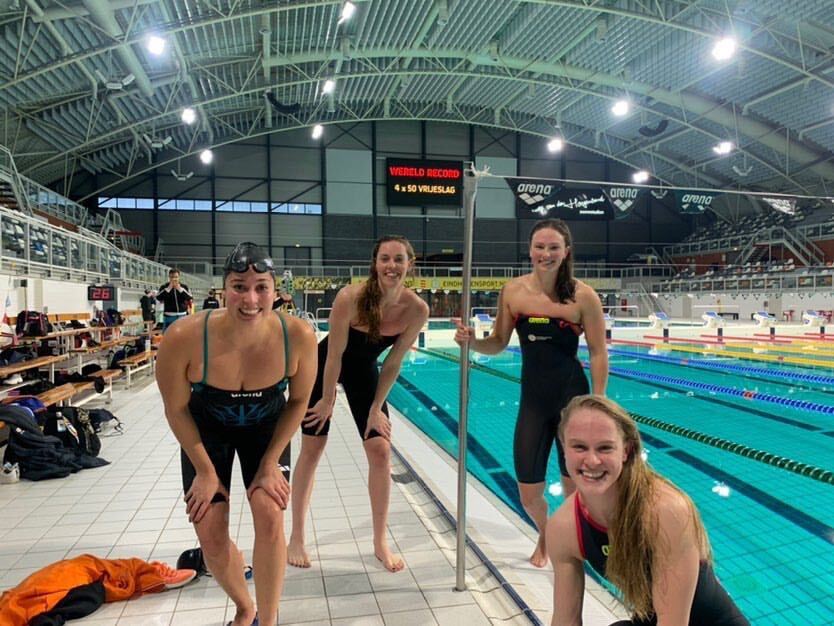 While the ISL season wrapped up a month ago, the late 2020 short course meter record surge hasn’t stopped yet.

The Dutch women absolutely annihilated the world record in the 200 freestyle relay, competing at the Wouda Cup, as the team of Ranomi Kromowidjojo, Maaike de Waard, Kim Busch and Femke Heemskerk combined for a time of 1:32.50.

The relay was done in a time trial format, with only one team competing in clean water attempting to hit the record.

That swim puts the quartet three-quarters of a second under the fastest time ever, a 1:33.25 done by the Netherlands at the 2009 European Championships, while the official world record stood at 1:33.91 from the Dutch team at the 2017 SC Euros.

The 2009 swim was never officially recognized as a world record, instead denoted as a “World Best”, just like the French men’s 200 free relay in 2008, though both are official European Records.

Heemskerk’s split is among the fastest in history — Kromowidjojo has been 22.70 on two separate occasions, Hinkelien Schreuder dropped a 22.81 on the 2009 relay, and Marleen Veldhuis has been as fast as 22.82. This is not Heemskerk’s first sub-23 split, however, as she clocked in at 22.90 on the mixed 200 free relay at the 2018 SC Worlds.

The 30-year-old three-time Olympic champion has actually been a member of all three record-setting teams, while Heemskerk was also on the 2017 relay.

Inge Dekker, Schreuder and Saskia de Jonge joined Kromowidjojo in 2009, while Tamara van Vliet and Valerie van Roon teamed up with Kromowidjojo and Heemskerk in 2017.

Congratulations on a very good swim.

I wonder why they didn’t use Valerie van Roon on this relay? She just qualified for the 50 Free at Tokyo with a 24.6 LCM. I know nothing about her PB in SCM and not everyone translates well but it seems odd.

This was a local meet that was primarily attended by swimmers from the Eindhoven training center. Van Roon is based in Amsterdam.

yeah, it’s conceivable this wasn’t the quickest time possible by a Dutch relay. They all swim at the same club and the same city, so it’s a club record as well as a world record lol. Maybe we’ll get to see them in their strongest formation at a short course World Champs again some time!

We desperately need more 4×50 relays at worlds, ISL and the Olympics!!

We need less relays if anything. The mixed medleys are awful.

Pretty cool that they all have the same stroke

Femke has always been a relay beast! And I just want to celebrate Kromo– 23 flat at any age but at age 30! No joke!

There’s still another chance to qualify.

There is not. Both 50 free spots are already secured

Ah, I just re-read the post. The other meets are only for events without 2 qualifiers. That sucks.

According to her Instagram Kromowidjojo also swam a 24.49 50 fly.

I would be interested to see reaction times. That first relay exchange looked very aggressive. Phenomenal swims all around though.