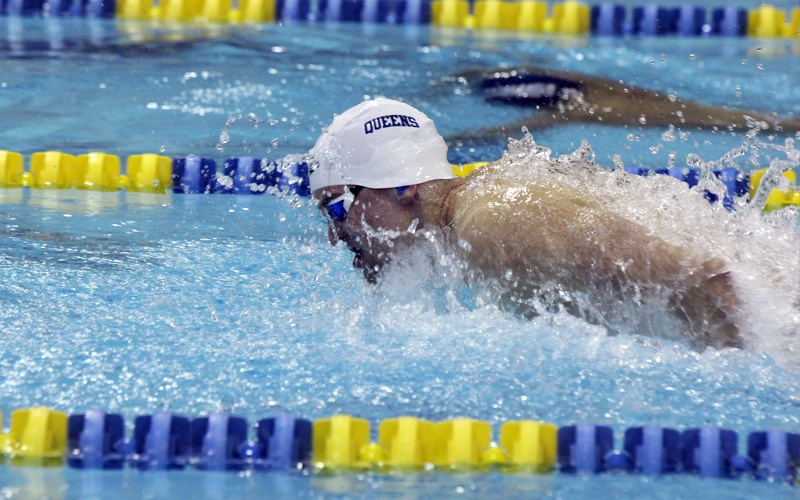 Division II powerhouse Queens University of Charlotte took on Duke as each team returned to competition for the first time in 2018. Current photo via Queens Sports Information Office

Duke vs Queens University of Charlotte

Duke University and Queens University of Charlotte returned to competition Friday for a dual hosted by Queens. The Duke women won the competition with a commanding 55-point spread, though the Duke men were bested narrowly by 16 points.

The Duke women won 11 of 14 events at Friday’s dual, mirroring the men’s squad from Queens, ranked number 1 in Division II, which also won 11 of the 14 events.

Though the Duke men only won three events, their depth kept the meet close. Of the 11 events Duke lost to Queens, the Blue Devils nonetheless finished either 2-3 or 2-3-4 in each of those races.

CHARLOTTE, N.C. – The No. 1 Queens University of Charlotte men’s swimming team won 11 of 14 events in Friday’s dual meet with NCAA Division I Duke University in the Levine Center.

The relay team of Paul Pijulet, Nicholas Arakelian, Marius Kusch and Dmytro Sydorchenko won the first men’s event of the day, the 200-yard Medley Relay, with a time of 1:28.13.

After the Blue Devils won the meet’s next two races, Pijulet reached the wall in 47.75 to take gold in the 100-yard backstroke. The Paris, France native also won the 200-yard Backstroke, finishing with a time of 1:46.41, more than six seconds faster that the next closest competitor.

“Our men were determined to race head-to-head with a program like Duke,” said Queens Associate Athletic Director for Strategic Planning and Leadership Development/Director of Swimming Operations Jeff Dugdale. “Our program has the utmost respect for Coach Dan Colella and his programs. We are excited to win a meet versus such a quality program.”

CHARLOTTE, N.C. – The second-ranked Queens University of Charlotte women’s swimming team hosted NCAA Division I Duke University on Friday night inside the Levine Center. The Royals picked up three wins and eight runner-up finishes in the meet against the Blue Devils.

“I was impressed with our women’s tenacity and willingness to step up and race a Top 20 Division I program,” said Queens Associate Athletic Director for Strategic Planning and Leadership Development/Director of Swimming Operations Jeff Dugdale.

The first of the Royals’ three victories came in the 200-yard Freestyle as junior Josefina Lorda-Taylor finished with a time of 1:51.01 to Duke’s Verity Abel by more than a second.

Sophomore Wanda Dollmayer picked up Queens second win in the 50-yard Freestyle (23.20), while Queens’ final victory came in the 400-yard Freestyle Relay. The relay team of Shelly Prayson, McKenzie Stevens, Alexandra Marshall and Kyrie Dobson finished with a time of 3:26.43 in the race.

CHARLOTTE, N.C. – The Blue Devil swimmers returned to action for the first time in 2018 Friday evening, taking on the reigning NCAA Division II national champions in Queens University of Charlotte. The Duke teams split action with the Royals, as the women came away with a 158-103 victory and the men were defeated by a narrow 139-123 margin.

“This was one of the closest meets we’ve swum in quite some time on the men’s side,” said head coach Dan Colella. “We’re really proud of the way the guys stood up and raced. Our congratulations to Queens on a meet really well swum. We saw some really great performances from both teams. Just a really exciting meet from start to finish. It went down to the last relay and the score hung within a few points throughout the evening. The energy on the sidelines was an all-time high. It was a great way to kick off the semester.”

“The women came in and did some great racing,” Colella said. “Coming off of two weeks of holiday training, we are really pleased with the way they competed. We had a number of season-best dual meet swims.”

The Blue Devil men received contributions from a variety of swimmers, beginning with senior Matt Johnson, who won the 1,000 freestyle in 9:27.82 to kick off the individual events. Sophomores Miles Williams and Sheldon Boboff went one-two in the 200 freestyle before junior Yusuke Legard was first to the wall in the 50 freestyle (20.48).

Duke’s swimmers and divers return to competition in two weeks when the program hosts North Carolina Saturday, Jan. 27 at 1 p.m. in Taishoff Aquatics Pavilion. The Blue Devils will honor the team’s senior class prior to the start of the dual meet.