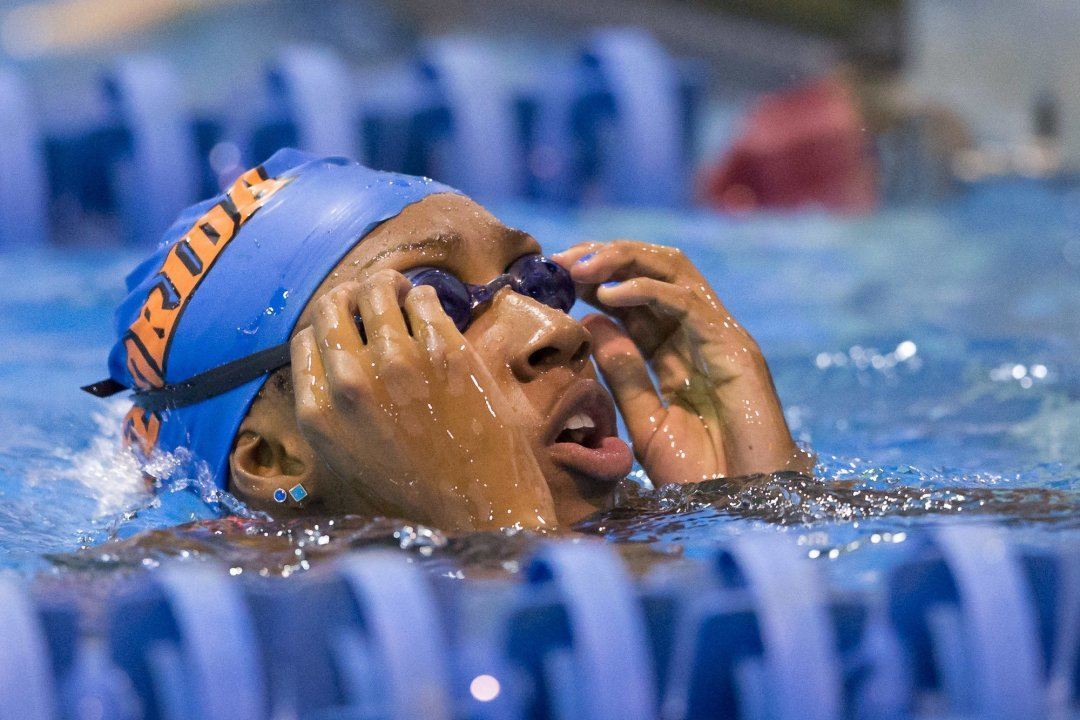 The Florida Gators dominated the first night of the Georgia Tech Fall Invitational at the GT Aquatic Center in Atlanta... Archive photo via Tim Binning/TheSwimPictures.com

The Florida Gators dominated the first night of the Georgia Tech Fall Invitational at the GT Aquatic Center in Atlanta by winning 9 of 10 swimming events, including a super fast sprint show-down between Florida’s Caeleb Dressel and Georgia Tech’s Andrew Kosic.

The Florida crew was inside the NCAA ‘A’ standard of 1:29.49. It was Canadian Sinead Russell, who took it out for the Gators in 22.51, followed by individual medley specialist Lindsey McKnight (22.21) and a strong backend by Texan sprinter Natalie Hinds (21.66) and four-time All American Ashlee Linn (22.56).

The Georgia Tech men’s squad gave the home crowd something to cheer for in a dramatic men’s 200-yard relay, which resulted in three disqualifications. The Yellow Jackets and the Gators made it a two-team race. In the end, though, Florida was victorious (1:18.90) over the host team, who finished less than a second behind (1:19.75). Placing third two and a half seconds behind was Florida’s Indian River State College (1:22.24), who edged out FAU (1:22.52) for third. FSU’s A squad, the Gator’s B team and Georgia Tech’s B entry were all disqualified.

If the 200-yard free relay was Part One of the Dressel/Kosic showdown, then give it Kosic as he posted a 19.64 lead-off leg for the second-place Yellow Jackets.

Gator and two-time All-American Jessica Thielmann turned the tables on the women who qualified in front of her this morning by winning the 500-yard free (4:37.82) over teammate Taylor Katz (4:42.79), who added three seconds from her prelim result, and Razorback Anna Mayfield (4:44.35), who dropped a half second from this morning’s effort. Thielmann, a U.K. native, played the prelim-final game well dropping 8.09 seconds from her morning effort, and exactly 10 seconds from her seed time. She did not, however, get an NCAA ‘A’ time, missing the mark by more than a second.

Florida Junior and two-time All-American Lindsey McKnight won the women’s 200-yard IM (1:57.40) over Arkansas freshman Chelsea Tatlow (1:58.89), who edged out FSU’s Chelsea Britt (1:58.91) by 0.02 seconds. It was a best time for the Florida native by 0.42 seconds. McKnight set her best time at the 2013 SEC Championships, which is a good sign, considering Thursday’s night race was a mid-season performance.

Hinds And Dressel Are Fastest Woman and Man Tonight

Florida Gator Natalie Hinds saved her sprint for the finals, as she won the 50-yard free (22.07) over FGCU’s Emma Svensson (22.18) and FSU’s Kaitlyn Dressel (22.55). Hinds mark is off her top result, when she swam 21.66 at last season’s NCAA Championships. The winning time is a season best for the 13-time All American from Midland, Tx.

After a head-to-head in the men’s 200-free relay lead-off leg, where Kosic bested Caeleb Dressel by 0.04 seconds with a 19.64, it was the freshman’s turn. Caeleb Dressel punched the wall with his best time this season (19.31), beating the veteran Kosic, who also reached the wall the fastest he has this season but missed equalling his best time by 0.02 seconds. Dressel’s teammate Corey Main takes third in 19.87, giving the crowd a treat with three men under 20 seconds.

Florida’s swimming domination Thursday night ended at the hands of the FSU women, who defeated the Gators by 1.06 seconds in the 400-yard medley relay. Arkansas’s women nearly pushed the Gators to third spot, when they finished only 0.02 seconds behind the Florida women.

– fThe men’s 400-yard medley relay made sure the Gators ended the night’s swimming events the way they started it — with a win. The Gators (3:09.55) narrowly missed the NCAA ‘A” standard (3:09.40) as they beat host Georgia Tech by almost two seconds. FSU was a distant third (3:16.41). For Caeleb Dressel/Kosic watchers, Caeleb Dressel recorded a 46.02 100-yard fly split, while Kosic ended the night with a statement swim by clocking a 42.08 in his 100-yard free anchor leg.

FSU diver Katrina Young showed that you can also beat the Gators tonight if you get them away from the lane ropes and onto the boards. Young posted a 327.50 to take the 3-meter event over Ariana Milone (317.25) and Delaney Dye (308.80), who made sure the Gators reached the podium by taking third.

Competition resumes Friday morning with preliminaries at 10 a.m. Friday’s finals begin at 6 p.m. Saturday, which is the final day of competition follows, the same schedule.

dressel with the 50 free A cut now. NICE. exciting to see a freshman go so freakin fast.

I thought the A standard was changed this year to 19.25? I think that 19.32 was last years cut….shouldn’t matter though…he will make it anyways!

Clarification – you’re correct. Here’s a good table with all “A” standards, plus what it actually took to get invited last year:
http://swimswam.com/take-qualify-ncaas-list-cutoff-times-2014-ncaa-championships/

may want to tell Georgia that time then, in the live results it is posted as a 19.32 for A cut.