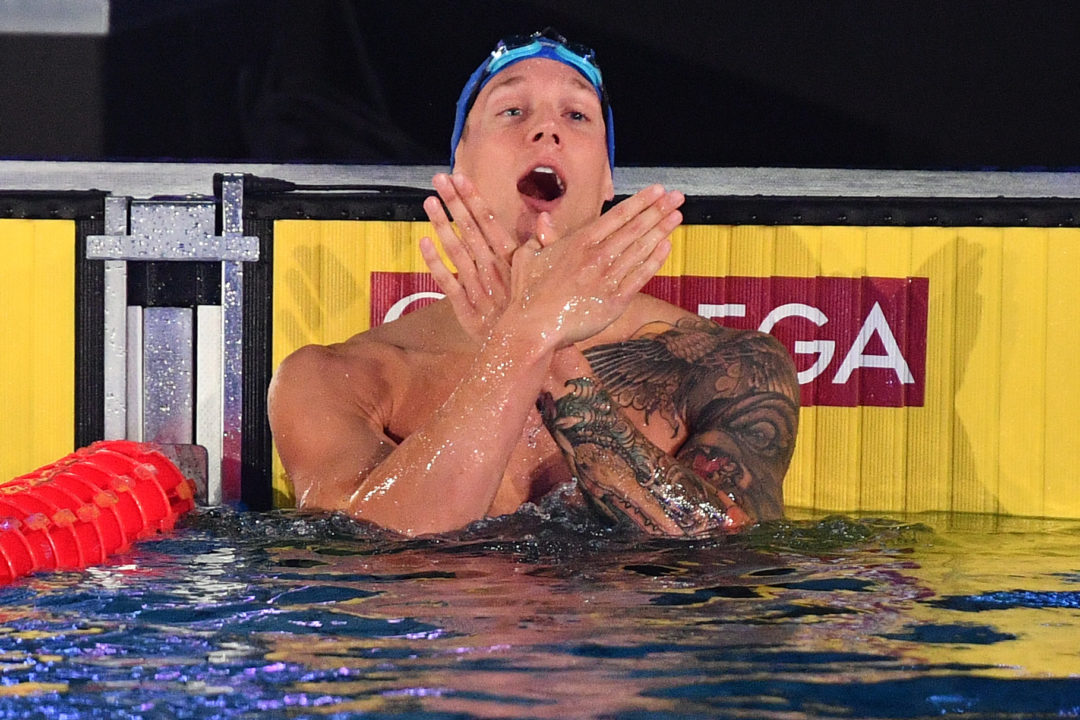 Caeleb Dressel has released the 7th installment in the "Dissect" series, analyzing three races in one with the Skins Final from the 2019 ISL American Derby. Current photo via Iuri Federici LaPresse

World Record holder Caeleb Dressel has released the 7th installment in his “Dressel Dissect” series on his YouTube channel, this time analyzing three races in one as he dives into the Men’s Skins Final from the 2019 ISL American Derby in College Park, Maryland (marketed as Washington, D.C.).

The first thing you might notice about Dressel’s latest episode of his “Stroke Dissect” series is that he is now calling it the “Dressel Dissect.” The coining of the series’ new name, inspired by Gold Medal Mel Stewart, can be seen in the latest episode of the Gold Medal Minute, presented by SwimOutlet.com. In this episode of GMM, Dressel talks about the “Dressel Dissect” series and his upcoming 11-part course called “Piece-by-Piece with Caeleb Dressel,” a live MOOC-like class where Dressel himself will lead participants through mental training, technique, health, fitness and more.

Clearly, Dressel’s online presence is expanding, and he is proving through both the “Dressel Dissect” series and the upcoming “Piece-by-Piece” course that he is not just a fast swimmer but also a swimming guru with wisdom and knowledge to share.

Of the now seven performances analyzed in the “Dressel Dissect” series so far, this is the second race I was present to see live and in-person (the first being the 17.63 50 SCY freestyle at the 2018 NCAA Championships), alongside SwimSwam Editor-in-Chief Braden Keith, SwimSwam Head of Production Coleman Hodges, and SwimSwam Reporter and stats guy Barry Rezvin. We caught up with Dressel for a quick interview after the meet ended, which you can see here.

Before analyzing the start of the first 50, Dressel tells viewers a bit about his strategy for the skins, stating that he does not go all out on the first round and that you have to “save up just enough.” He comments that he believes he breathed every two strokes in the first heat, which was verified by the footage, and then checks out the start before letting the race play through.

At 2:41, Dressel says, “This might be the first start that I’m actually happy with… ooh, very little splash.”

He didn’t need to get his hand on the wall first in the quarterfinal of the skins as the top-4 swimmers would advance to the semi-final. Dressel, breathing to his “bad side” on the second 25, got his hand on the wall second, behind New York Breakers frontman Michael Andrew, hitting the wall 21.34 to Andrew’s 21.20.

“Oh, that’s right, I started breathing bad-side, that’s why I started slowing down so much. Oh, my goodness. Alright, so I was actually cutting it a little close there,” says Dressel at 3:20.

“It’s kinda weird, it’s almost more painful to hold back in a race than to just let it happen, especially for a 50, so, I wanted to get oxygen, but on the flip side it’s like, holding back a racehorse, it’s just not–it’s almost harder to tone it back, which is exactly what was happening here. It’s almost like you’re muscling it to hold back, and that’s exactly what I was doing in this race, and that’s why I don’t think it was very clean, [the] streamline was not tight… let’s at least see what we got with the stroke itself; a little too far away, can’t really see. Ah, left arm’s bad, left arm’s bad. You guys see that, see how straight-up that is? That’s not me, that doesn’t even look like my stroke,” comments Dressel (3:37 to 4:14).

Dressel then gives viewers his opinion on straight-arm freestyle:

“I have a personal vendetta against straight-arm if I’m using that term correctly. I don’t like straight-arm, it doesn’t work for me… that does not mean it will not work for you, this is just my personal opinion. Yeah, you see, it just looks like I’m trying too hard to hold it back, especially with this breathing pattern. I’m trying to do a 50-ish stroke with a breathing every-two pattern and that’s not good. The right arm looks good, I’m happy with that,” says Dressel (4:16 to 4:40).

For the second round, Dressel tells viewers that his strategy for the semifinal was to not breathe on the first 25, then get under the wake following the flipturn, and then breathe every two strokes until the end of the race. Even though he was breathing away from his competitors he was breathing to his “good side.”

Dressel won the semifinal with a time of 21.39 while LA Current’s Michael Chadwick hit second in 21.84. He describes his stroke as a little bit “choppy” and “bouncy,” stating that the right arm seems a little bit “forced.” For reference, Dressel’s left arm is his “tattoo arm.”

Before Dressel and Chadwick can step onto the blocks to race the final heat of the skins, Dressel the commentator gives viewers an in-depth explanation of freestyle technique, calling back to previous videos.

“So that’s my big thing with… I think why all the strokes are, all the freestyle strokes, yes, I think there’s different freestyle strokes, that’s why I think they’re all more interrelated than we think because the fastest way to get from one end of the pool to the other is by not breathing, it’s your 50-stroke, you know, you can’t do that in a 100 because you would not make it 100 meters without breathing going all-out. That’s why I think the 50-stroke is faster than the gallop because it’s a much flatter stroke, you’re not galloping in a 50. I know you’re not breathing, but why should the breath have anything to do with it, because in my last video I talked about how I don’t think the breath adds or negates anything from the stroke if you’re breathing correctly, I think you can mess up a lot if you’re breathing incorrectly with throwing your body out of position if you’re leaving it out too long, shoulders are gonna rotate, hips are gonna drop, it’s a whole mess. Like, everyone’s good, one of my favorite [Gregg] Troy quotes again, ‘everyone’s good at swimming until they breathe,’ that’s the tricky part is learning how to get your breath and fill your body with oxygen, so, you don’t want that up-and-down chop. The fastest [way] from point A to point B is a straight line, and that’s why I think the 50 is the fastest stroke. So, do the 50-stroke but add in a breath, that’s the tricky part and that’s what I’m trying to work on at the moment,” explains Dressel (9:18 to 10:34).

As Dressel begins his analysis of his 3rd-consecutive 50, he mentions how badly the pain was setting in.

“I’ve never had a race hurt worse than I’ve hurt in practice, and I’ve, I hurt, your boy knows how to hurt in practice. I’ve taken it to some places that are pretty embarrassing [that] got on the scoreboard in practice,” says Dressel.

Dressel then tells viewers that he plays a mental game with himself during every skins race in which he does not allow himself to breathe on the final 50, no matter how badly it hurts. Here, once again, Dressel talks about the importance of having a race plan and sticking to it, as he mentioned in his analysis of his 100 LCM freestyle from the 2013 World Junior Championships. Dressel mentions that pain and weaknesses expose a lot in one’s strokes.

Dressel managed a 21.25 in the skins final, more than a second ahead of Chadwick. He mentioned that the first 25 meters of the race looked good but then he lost it a little on the second 25 where he was “crane armin’ it” as he was in the 50 freestyle from the 2018 NCAA Championships. Conversely, Dressel thinks that Chadwick’s stroke looks better than he does, even if Dressel beat him.

At 16:59, Dressel concludes by saying, “There’s no accidents in the sport. What you put into training is what you’re gonna get at the end of the season, guys, and your races are gonna hurt, it’s as simple as that, OK? So, that’s where you’re gonna be exposed, so make yourself hurt in practice, and then come race day it’s second-hand nature. Don’t expect anything from yourself that you haven’t done in practice, I think that’s the most important thing about swimming. You can’t just step on the block and say a quick prayer and expect everything to be fine and dandy cos it’s not, and it’s still gonna hurt, I’m gonna say that as many times as I can, your races are still gonna hurt, three 50s back-to-back-to-back, it still hurts, but that’s when you rely back to your training and that’s when you go back to what your race plan was.”

Past Episodes of the Dressel Dissect

For more from the ISL American Derby at the University of Maryland, College Park, check out the links and videos below.

Also, it appears the artist that drew Dressel’s portrait shown in the SwimSwam interview was captured on camera by Miller in this vlog entry!

These are great. Learn a lot. But I had my suspicions about the motivation for it, and sure enough, he’s now hawking an online course for like $80. Probably worth the dineros.

Hey, he’s got to make a living somehow. And hearing it straight from Goat Jr.’s mouth is probably worth more than $80 honestly. I swam in college for a D1 school and the advice Dressel is giving in these videos is head and shoulders above what any of my coaches ever had to say.
I’d have paid $80 to get some additional (and “better”) instruction than what I was getting in the pool.