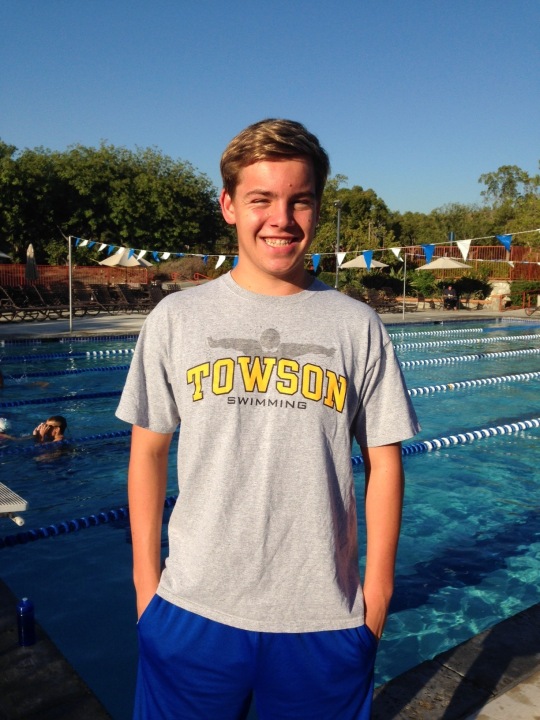 Aaron Magazine from the Coto Coyotes Swim Team in Coto de Caza, California is making the trip cross-country, as he has verbally committed to the Towson University Tigers.  Magazine brings some distance power to the Maryland team, which will help fill the void to be left by current distance specialists, Matt Collingwood and Jon Burr, both seniors on the current roster.

Magazine’s best yards times include 4:40.35 in the 500y freestyle, 9:53.88 in the 1000 freestyle, and 16:42.84 in the 1650 freestyle distances.  The latter two times were set at a 2013 Winter Age Group meet in California, while he clocked his 500 personal best just this past May at the California Interscholastic Federation (CIF) Southern Section Division 1 meet.

As to what appealed to him about Towson University, Magazine indicates it is the “ the diverse and positive community of the school itself, and the unique feeling of home I felt as soon as I set foot on campus.”  Magazine adds, “Towson makes me so excited for the road ahead!”

Matt lowe is a senior as well. Collingwood, Burr, Lowe all seniors all A-finalists in the 500 and 1650. Towson needs to bring in some big time distance swimmers