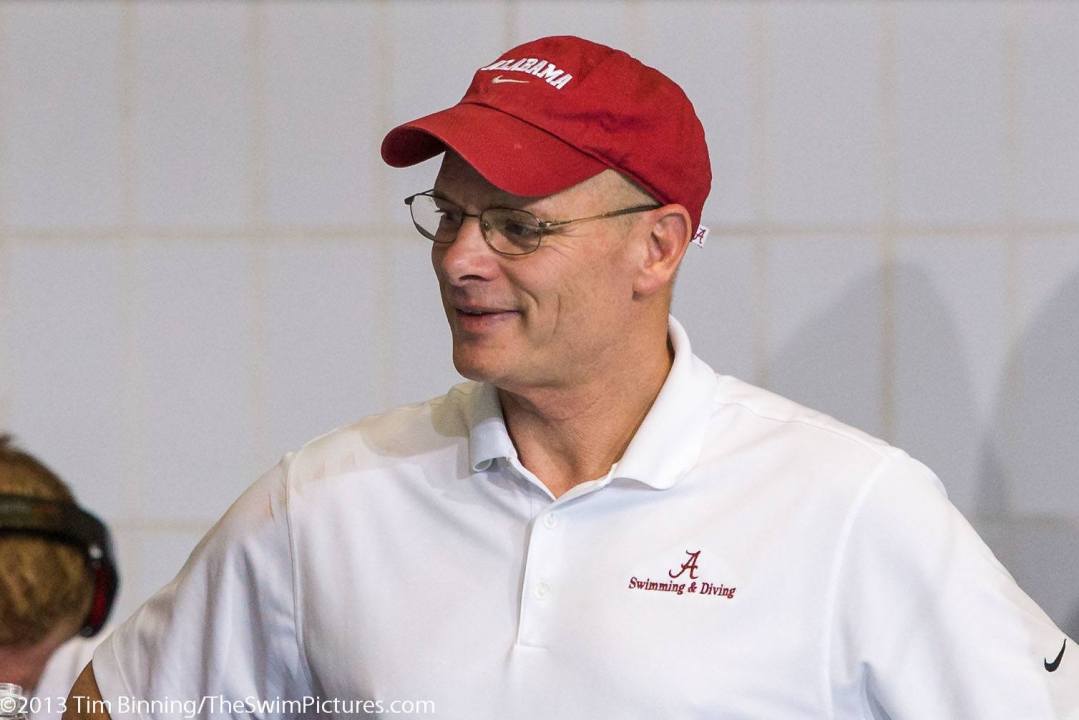 Taper. Rest. Preparation. Drop tapers. Swim coaches have a million words to describe the art of resting, and often it seems every coach has a different definition of each term. But Pursley says the terminology truly does matter - at least in the mind of the athlete. Archive photo via Tim Binning/TheSwimPictures.com

Ben Patton and Danny Kovac, both of whom hit new PBs in morning prelims, knocked even more from their fresh best times tonight at the Mizzou Invite.

Kate Douglass went the fastest 50 fly relay split in history tonight, then became the seventh woman ever to break 50 seconds in the 100 fly.

Kieran Smith dropped to a 1:43.22 200 fly tonight to win the final and get under 1:44 for the first time, helping the Gators to win the meet of Auburn.

That’s one big takeaway from a conversation we had with Pursley after Alabama’s performances at the Georgia Tech Invite, a meet where Pursley said the Crimson Tide took less rest and preparation than they typically do mid-season.

We reached out to Pursley this week in part because while many coaches remain very secretive about their own programs and rest strategies, he and his staff have been relatively straight shooters when it comes to sharing information. (A couple years ago, one of Pursley’s assistants ran us through a very informative look at season planning, the concept of ‘regeneration weeks’ and why fast in-season swimming doesn’t always imply any sort of change from a typical training cycle – you can read that here). True to form, Pursley shared an inside look at the team’s preparation for the Georgia Tech Invite, including some interesting ideas about the broader topic of rest terminology.

“I think what you call it can potentially have an impact on the mindset,” he told SwimSwam this week. Pursley said he was interested to read a quote from rival SEC coach Gregg Troy recently in which Troy said he doesn’t use the word ‘taper.’ Pursley said he didn’t know that that was Troy’s policy, but that Pursley had made a similar lexicon change several years back.

“I stopped using it a number of years ago,” he said of the word ‘taper’. “The terminology I use is ‘peak performance preparation’.

“Too many swimmers think taper means we rest. That’s a big part of it, of course, but you’re also sharpening up, and some of the work you’re doing, you actually want it to be enhanced in the last few weeks and do it better and faster than you have all season. I think [it’s important] just to get away from that subconscious mindset that once the taper starts… that I’m just going to take it easy from here on out.”

Preparation for the Georgia Tech Invite

“We approached it a little differently this year,” Pursley said, noting that while his general philosophy has been to swim through mid-season invites and put the main focus on getting NCAA cuts at the SEC Championships, over the past few seasons he started to follow the NCAA trend of taking more rest to go after NCAA cuts mid-season. He said he was disappointed with how that turned out for his team last season, and made a course change back to the route he felt more comfortable with.

“We didn’t really disrupt the volume of training,” he said of this year’s preparation for Georgia Tech. “We backed off the weights a day or two before we went and did some tweaking of the workouts, not so much in preparation for the meet but because we were going to be racing hard for three days.”

Take that for what you will, of course – coaches, fans and swimmers rarely admit to a full rest or even a partial one. On the other hand, Pursley gave a pretty raw and honest take about his reaction to the team’s swims and what it could mean for the remainder of the season:

We chatted briefly with Pursley about a few other topics:

Great stuff Jared thanks for sharing!

Denny is a great coach and guy.

Taper is the greatest word in the English language. It should be used willingly and gratuitously.