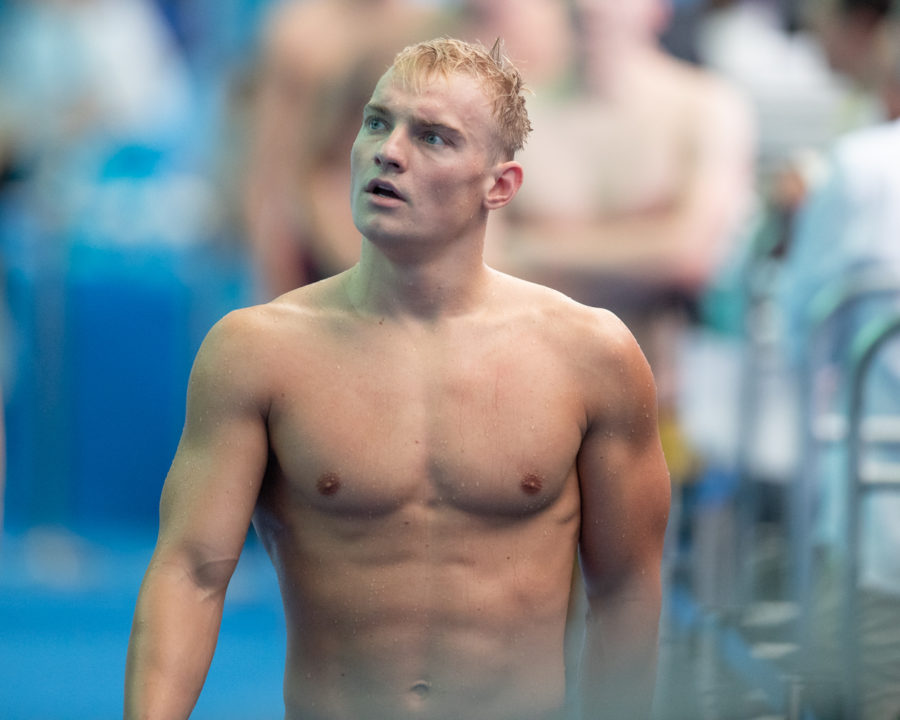 The 2018 US National Champion Andrew Seliskar will swim as part of the the American prelims 4x200 free relay on Friday morning. Current photo via “Rafael/Domeyko Photography”

2018 U.S. National Champion Andrew Seliskar and 4×100 freestyle relay gold medalist Zach Apple have gotten the nod in prelims for Team USA for the men’s 4×200 freestyle relay.  The duo will be joined by Jack LeVant and 2016 Olympian Jack Conger.

Speculation remains for where the Team USA staff will go tonight, with Blake Pieroni, Caeleb Dressel, and Townley Haas waiting in the wings.  In terms of lifetime bests, Haas is by far the fastest active American swimmer at this meet, at 1:45.03.  However, he (along with Seliskar) was well of that time in the individual event, with Haas finishing 14th in 1:46.37 and Seliskar finishing 15th in 1:46.83.

Levant skipped NCAAs and the World University Games and has raced lightly after dealing with mental health issues, so there’s a lot of anticipation about what he can do.

Australia also chose to save its two fastest swimmers for an anticipated finals appearance, leaving Clyde Lewis and Kyle Chalmers off of this morning’s relay.  Lewis raised eyebrows earlier this week when he dropped a 1:44.90 swim in the semifinals of the individual 200, placing himself in the top 10 performers in history.  Chalmers, a 100 specialist who does better extending to 200 than dropping to the 50, clocked a 1:45.56 at the Commonwealth Games last summer, making him the second-fastest Aussie in the event during this Olympiad.  However, with a stable full of 200 freestylers with bests in the 1:45-high to 1:46-low range, Australia has plenty of finals options should the coaching staff go in a different direction.  For prelims, Australia will roll out the foursome of Alexander Graham, Jack McLoughlin, Thomas Fraser-Holmes, and Mack Horton. Expect the best 2 of those 4 to swim in finals.

The Brits will use Thomas Dean, Calum Jarvis, Max Litchfield, and Cameron Kurle in prelims. They have individual bronze medalist Duncan Scott and James Guy to add to their finals relay; Dean is the leg that most will be looking at from this prelims group. The 19-year old is the 3rd-fastest Brit this year in 1:46.86, and he’ll be a key leg if the Brits have a hope at gold in the finals.

China will use 200 and 400 free champion Sun Yang on their prelims relay, as well as Xu Jiayu, who dropped out of the men’s 200 back semi-finals at the last minute, ostensibly to focus on this relay.

Ideal final line up is Dressel Apple Pieroni Haas. Unlikely to happen though, Dressel probably replaced by Seliskar unless Conger surprises. He looked pretty good in the fly although it wasn’t the fastest.

Would love to see Dressel swim the 4×200 but do you think they’ll put him through that? It would be three races tonight and then the finals of the 50 free and 100 fly the next night (if I’m figuring correctly?) Pretty grueling.

Absolutely. A good 200 free not only helps the relay, but may give Dressel another event to perhaps focus.

Why Dressel should be on the relay

To put it in perspective:

Egypt pulls out of the mens 4×200 relay. Mmmmm oh yeah they where in the same heat as Israel. Any chance that FINA steps up and sanctions Egypt for not demonstrating the code of sportsmanship?

Not sure it is the real reason why there were no show but it has happened so many times in the past and they always say it is a “medical reason”. Not just in swimming, but in any sport

Top 12 gets an automatic Olympic berth, nah you don’t pull out of a freebie. It’s the same nonsense. You don’t have to invite me over for Christmas dinner but you gotta show up and do your best on the field of play. That’s what you signed up for, it’s called sportsmanship.The sad thing is nobody is going to pick up on this

I agree with you. When I saw they were no show, I immediately thought the same thing