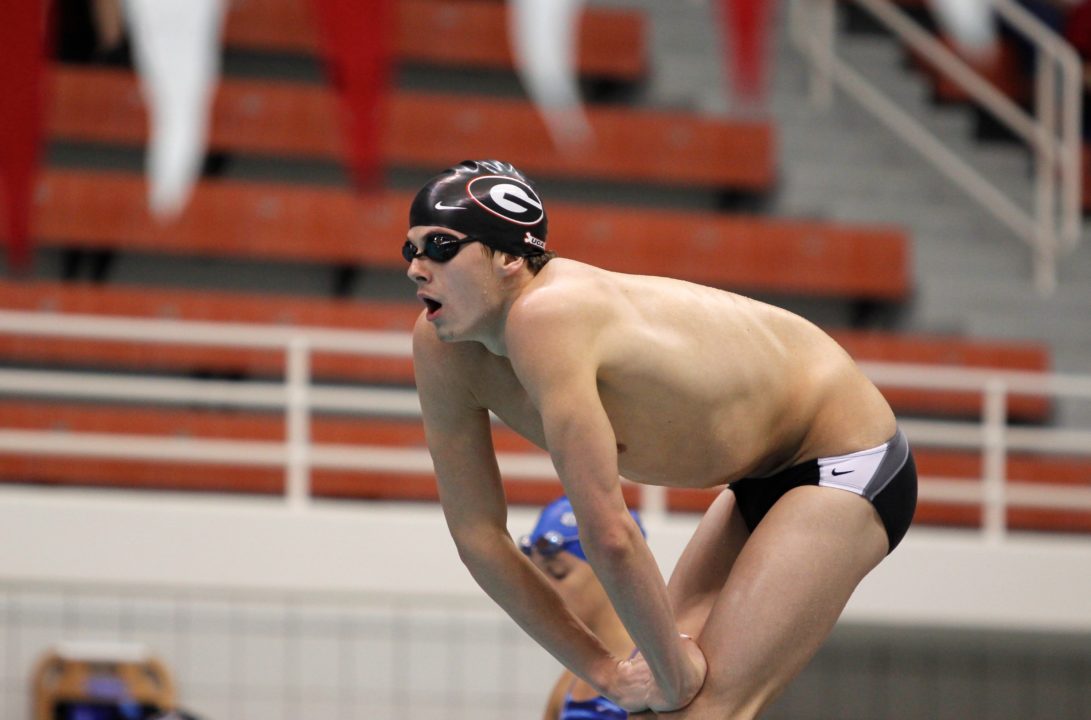 Nic Fink is ready-to-go in this morning's 100 breaststroke, where he looks to take on the number one seed Sam Tierney from Missouri. Archive photo via Shanda Crowe, shandacrowe.weebly.com

We enter Day 4 of the 2015 SEC Championships with minimal scratches for this morning’s prelims.  The Georgia women and the Florida men are in the lead through last night’s events, but some big players across several schools will try to make a decisive scoring impact with the swims they have left.

Men’s 200 Fly – The field remains in tact through the top 14 seeds, as Florida junior Luke Torres is the highest seeded swimmer to be absent from this morning’s heat sheets, with a seed-time of 1:46.71. With the remaining top twenty in tact, look for an epic battle to take shape among key players such as Georgia’s Chase Kalisz and Tynan Stewart, Mizzou’s Mack Darragh and Tennessee standout Sam McHugh, among several other viable threats.

Women’s 200 Fly – Georgia freshman Kylie Stewart looks to have opted out of this race in favor of her focus on the 100 backstroke today, where she is the number two seed.  In the fly, Stewart held the 5th seed with a time of 1:56.50, which now moves LSU sophomore Kara Kopcso up a notch and right next to the women’s 400 IM 2015 SEC champion, Hali Flickinger from Georgia.

Men’s 100 Back – The field remains in tact this morning, which indicates all the men are focused and ready for a sure-to-be-tight showdown among the discipline’s biggest names in this conference.  Georgia men have Taylor Dale gunning for points, while Missouri is well-represented with five swimmers in the circle-seeded heats, including 7th seed Austin Fish.  But, the Florida men may also add to last night’s point onslaught, with Christian-Paul Homer, Jack Blyzinskji and Corey Main ready to do some damage.

Women’s 100 Back – Florida’s Sinead Russell was a known scratch and we continue to wish her well in health. Then next highest seeded absentees come in the form of 12th-seeded Anna Mayfield (Arkansas), and Lisa Bratton (Texas A&M). Both women competed in last night’s tremendous finals session, where Mayfield placed 11th in the 200 free and Bratton won the B-Final of the 400 IM.  Missouri’s Hanna Stevens is the #1 seed this morning, but she’ll need to fend off Georgia teammates Kylie Stewart anda Olivia Smoliga, as well as Kentucky Wildcat Danielle Galyer, if she wants the top spot for tonight’s final.

Men’s 100 Breast – No notable scratches this morning, which means the heavy-hitters of Sam Tierney, Michael Duderstadt, Nic Fink will have a full field to which to lay waste to set up a paramount final tonight in the event.

Women’s 100 Breast – The highest-seeded scratches on the women’s side were 14th-seeded Emily Cameron and 16th-seeded Annie Zhu, both from Georgia, along with 20th-seeded Brooke Malone representing Auburn.  As with the men, this means a rather complete field will be targeting one another as we see an impressive list of competitors try to do what they need to do this morning to make it back in their best position tonight.  The list includes Tennessee’s Molly Hannis, Missouri’s Katharine Ross and Abby Duncan, Auburn’s Annie Lazor, and Texas A&M freshman Bethany Galat.

Why didn’t Florida swim any men in the 100 breast?