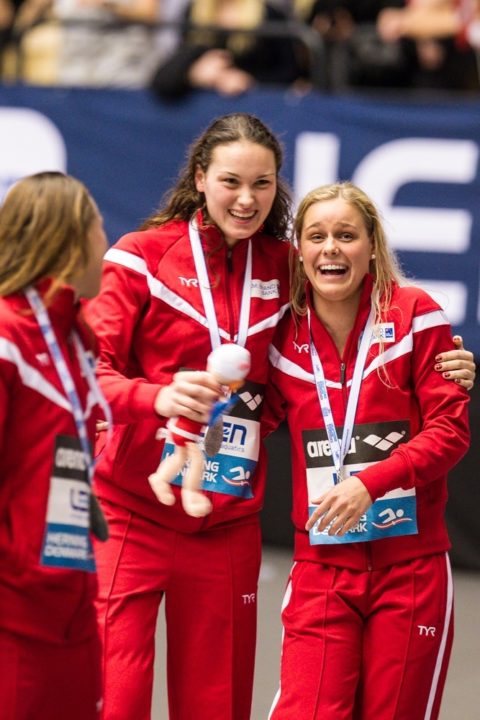 With the biggest stars in Danish swimming already pre-qualified for Rio, next week’s Danish Open has somewhat less at stake than four years ago. The list of pre-qualified swimmers should be familiar to most international swimming fans. Lotte Friis, Jeanette Ottesen, Rikke Møller-Pedersen, Mie Nielsen and Viktor Bromer are all already on the list due to their performances last summer in Kazan.

There are less than ten other swimmers with legitimate chances to add their names to the list. Some of them were there in London, including Mads Glæsner and Pal Joensen, the distance tandem that shares a country once every four years. The up and coming talents are split between some America based males (Søren Dahl, Anton Ipsen, Anders Lie) and the younger set of females occupying the national training center (Sarah Bro, Emilie Beckmann). Denmark also pre-qualified their men’s 4×200 freestyle relay last summer, and the content of that relay is far from set in stone.

That 4×200 relay is the enticing carrot for nearly all of the men trying to qualify. Although neither Joensen or Glæsner were on the relay last summer, both took part at the 2012 Olympics. Of the two, Joensen has performed much better in distance, and has elected to not try for the 200 this time around. Despite owning the Danish record at 1:46.94, Glæsner has not been under 1:50 since 2012.

Anders Lie is the top Danish side, tucked in behind Germany’s Paul Biedermann. Lie competed well for Michigan this past season, although his NCAA performance indicated he may have been holding something back for this competition. He was the fastest last summer and remains the most likely member of the Rio relay.

The next two best candidates are Daniel Skaaning and Søren Dahl. Of the two, Dahl has shown the most improvement in the past year, although it remains to be seen how much will translate from SCY to LCM.

Other contenders include the wildly inconsistent Magnus Westermann, and the bravest but also longest shot in Sebastian Ovesen.

Even Anton Ipsen, with an entry time of 1:51.93, is giving this event a shot. Ipsen, who has also indicated that this meet has been his yearlong focus, will need to transfer all that has worked for him in yards to a long course 400 or 1500 to stamp his ticket.

Danish Open 2016 Preview, Women: Where The Next Wave Comes From

Danish women have been internationally more successful than the men historically. With Friis, Ottesen, Møller-Pedersen and Nielsen all back from 2012 (but perhaps only Nielsen likely to continue post-Rio), the time for a new generation to step up is coming.

Before we get to that, there is one big name from 2012 that is still on the outside looking in: Pernille Blume. Blume followed her 2012 breakout with steady improvements and a new peak in 2014. Her times from that year (24.59 in the 50 and 53.69 in the 100) would easily make it under the Rio standards. But Blume has struggled mightily since the departure of Shannon Rollason from his post at the National Training Center. 2015 marked a step back for Blume, and she must hold the line or risk not qualifying.

Sarah Bro must either have a huge breakthrough swim in the 200 backstroke (and break a national record), or do so in the 100 free. Even her 100 freestyle could depend on how well Blume swims, as Denmark is unlikely to risk another start for Ottesen and Nielsen for a hopeless cause.

Emilie Beckmann has been steadily improving in the 100 butterfly but nevertheless needs a significant drop from her best of 59.78 to make the time (58.65). Julie Jensen, a shoe-in for the European Junior squad, has a decent chance to surpass the 50m standard if she improves from her record breaking swims last month.

Already above we mentioned that Germany’s Paul Biedermann appears on the psych sheet. Some other notable names that appear on the list:

Check back at Swimswam for daily recaps of all the action from Bellahøj Swimming Stadium.

Denmark will almost certainly put in a women’s 4x100m free for the Europeans, and then (presuming they qualify) decide from there whether or not to enter an Olympic team.