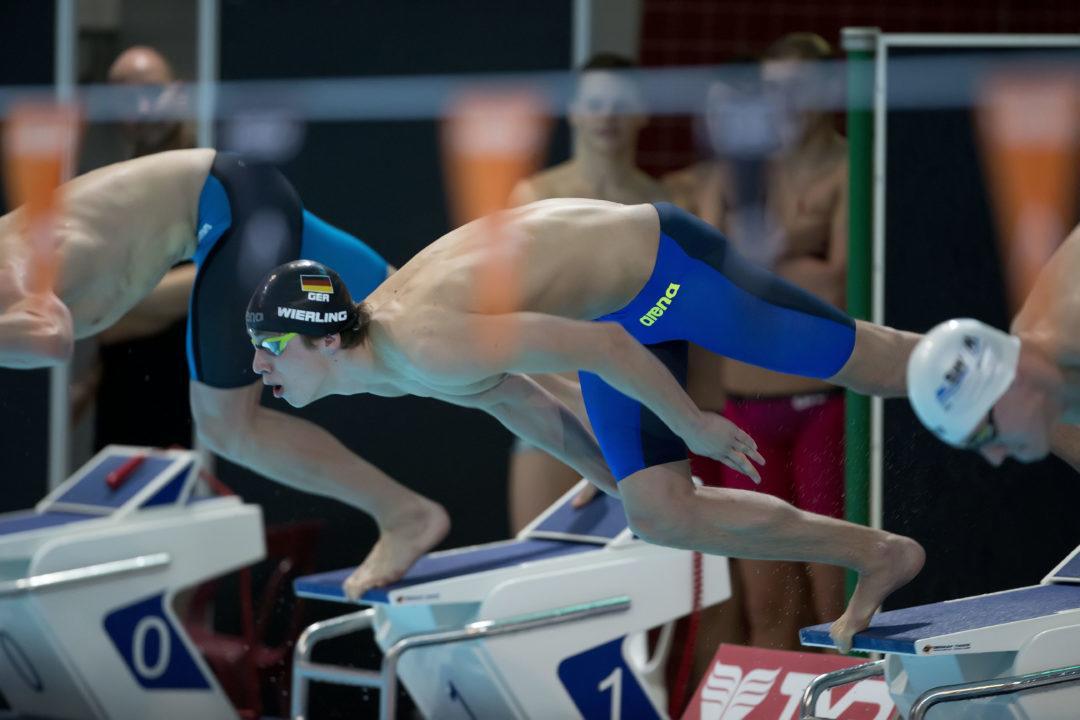 With his perfomance in the 50 m freestyle he sits on the eighth place in the 2015/2016 world ranking:

Because of the German olympic nomination procedure, Damian Wierling must confirm his performance at the German National Championships in the 50 m freestyle at the German Open in early July which he has chosen for the second qualification step: He has to swim faster than 22,85 in prelims and 22,60 in finals. A feasible task for the 20-year old swimmer who trains with Dorothea Brandt, Hendrik Feldwehr and Christian vom Lehn in Essen, Germany. His coach is Nicole Endruschat.

Damian Wierling finished third at the 2014 Youth Olympic Games (YOG) in Nanjing in the 100 free in 49,07 and 200 free in 1:48,91: “In the 100 m race I have learned the most. I wasn’t very good in prelims, I just reached the final on an outside lane. I was a little bit exhausted before the race and then I was able to swim a personal best time – this has been the most striking race of my career for me.” Damian told SwimSwam in an interview before his outstanding successes at the German National Chamionships.

Winning two German national titles are a special achievement for the 6’5” tall athlete: He suffered a pericardial inflammation at the beginning of 2015 and also had a nose surgery because of problems with the sinuses but he attended the medicine of the German Swimming Federation (DSV) Dr. Michael Ehnert: “I went several times to Hamburg to Dr. Ehnert – all my medical values are super stable.”

The student of economics at the University of Duisburg-Essen (Germany) is currently concentrating fully on his swimming career, after he has completed in 2014 the St. George’s International School Duisburg-Dusseldorf (Germany) with the A-level. At the international school he was taught in English in all school subjects – but a scholarship for example in the USA is not an option for the 20-year old: “Coordination between swimming and studying there is very good and you can finish your studies quickly but the training groups are very large and for me the individual training in Essen is better.”

Damian is looking forward to take part in his first Olympic Games. He doesn’t think that he will have problems with the special Rio competition rhythm with prelims starting at noon and finals at 10 pm. He was able to train under these circumstances with his team several times and he also competed at the Swim Cup Eindhoven with a competition schedule similiar to the Rio-rhythm: “So, I’m the guy who likes to remain awake longer and sleep longer, so I’m always been. I have found it convenient that the heats took place later and I could sleep a little longer in the morning. We had already changed the rhythm in a training camp in Turkey in Belek.” While other swimmers have problems with the need to sleep longer in the morning because of ambient noise and the brightness, the 20- year old looks relaxed to the changeover in Rio.

In addition to studying and training, Damian Wierling is regularly with Marco Koch at Arena swim clinics in Germany: “Marco is a super athlete and totally down to earth, although at the time he is Germany’s most successful swimmer and in the 200 m breast one of the best worldwide. I think he is a totally cool guy, I can talk with him about many things and if you have questions, for example about his nutrition, he always answers openly and honestly. It’s is always great to spend time with Marco.”

Damian Wierling will be one of the youngest swimmers in the German olympic swim team – but also one with a chance to make the olympic semifinal or final in Rio – and that would be a great success for the emerging German sprint star. Awesome! Wishing him the best.

Thank you for your kind words – I’am sure Damian appreciates!

I love seeing young stars on the rise! Great swims!

Damian is also fast in the 200 m free but has concentrated because of his illness on the 50 and 100 m free.